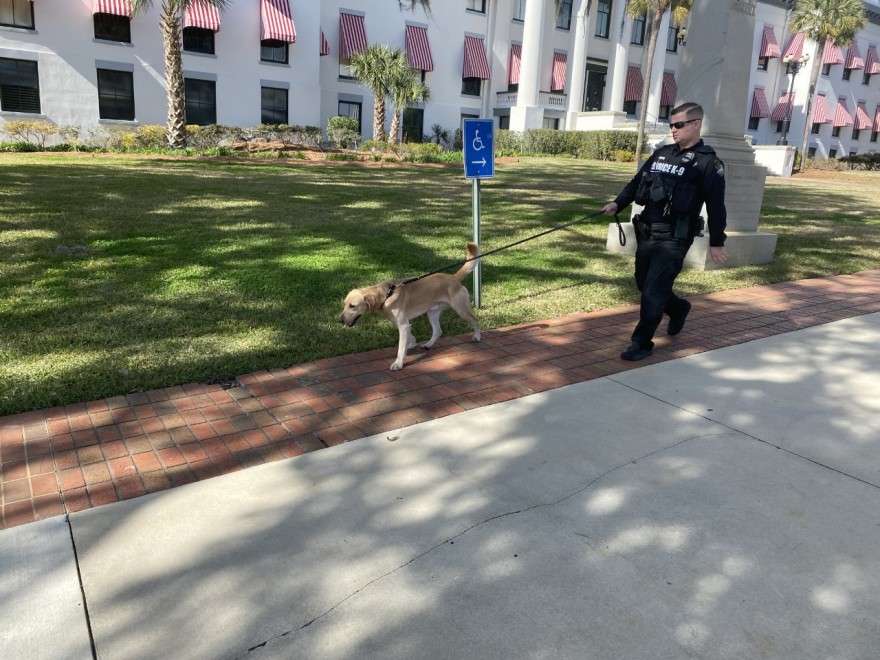 Warnings about violent protests at state capitols Sunday did not pan out in Tallahassee amid heightened security and increased law enforcement presence. Florida’s capitol grounds mostly saw journalists roaming about, and the occasional tourist and residents taking photos of the historic capitol building.

One man dressed in a black sweatshirt who stopped by asked a capitol police officer what part of the capitol complex was okay to enter. The officer told him, “everything except inside.” The man hung out for a while, then left.

Inside both capitol buildings were law enforcement officers from varying different agencies. The Capitol Police, Florida Department of Law Enforcement, Tallahassee Police Department and Leon County Sheriffs Office were among them. As the hour drew closer to noon—the time promoted on at least one social media flyer advertising an “armed protest at every capitol”, an FDLE officer came outside with a bomb-sniffing dog and did a quick loop around the old capitol building.

Aside from a minor flap involving an “abandoned” beachcomber wagon used by tv reporters to hold their tripods (the item was quickly claimed), all was quiet.

“It’s a beautiful day! Nothing happening here!” said a man as he rode by on a bicycle.

Around 1 p.m., Tallahassee Mayor John Dailey held a press conference at the downtown Chain of Parks.

“We are prepared,” Dailey said. “I hope nothing happens…but hope is not a plan.”

Dailey thanked Gov. Ron DeSantis for granting a request to activate the Florida National Guard. That request came Friday after the arrest of a self-proclaimed “anarchist” who threatened to kidnap protestors that came to the capitol Sunday.

Around 1:30 p.m, other people began to arrive at the capitol complex, including Decaris Hunter of Panama City who carried a multi-color sign that read “Spread the LOVE. Honk.Honk.”

Hunter told the Orlando Sentinel, “in order for us to see a change we’ve got to be the change. That’s all I’m trying to do. Be the change I want to see,” he said. “I feel this is the job God created me to do. So I’m going to do it.”

Dailey says the city has received no protest permit requests, and that law enforcement will remain on guard through the week as the inauguration of a new administration gets underway. The increased vigilance comes after last week’s insurrection at the U.S. Capitol in Washington D.C. A violent mob of President Donald Trump’s supporters overran capitol police, sending Congress into lockdown.