Want To Listen Better? Turn Down Your Thoughts And Tune In To Others 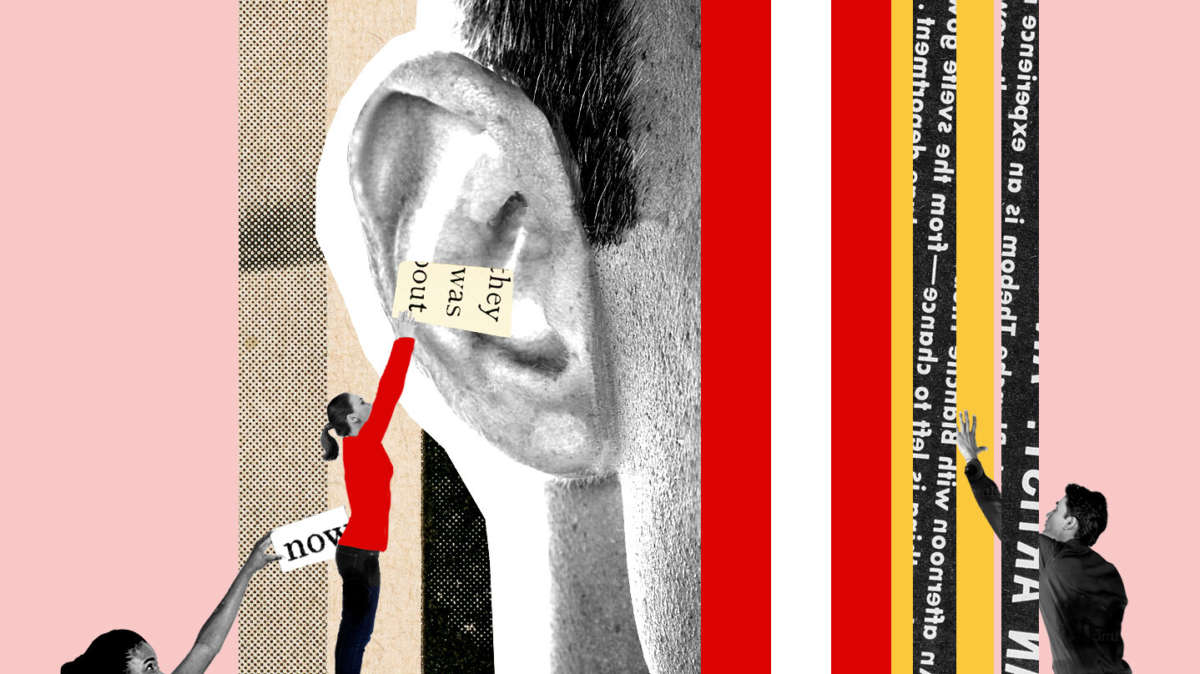 Listening is more than just being physically present when another person is talking. Anyone who has deployed a disengaged “mhmm” while their partner asks about dinner or a kid breaks down the difference between a brontosaurus and a triceratops knows this well. But listening — not just hearing — means a lot more than that. And dedicating yourself to actively listening can be radical and transformative.

The basics of good listening are familiar: maintain eye contact, nod, use “I” statements instead of “you” statements. Here are some tips that go beyond the basics:

Shut up and listen.

This might sound simple, but it’s actually a really important first step. “We need to give people uninterrupted time to speak,” says Tania Israel, a psychology professor at the University of California, Santa Barbara and author of the book Beyond Your Bubble. “And one of the ways to remember this is that if you rearrange the letters of the word ‘listen,’ it spells ‘silent.’ ” We love a mnemonic device!

(Quick disclaimer here: Not everyone deserves your time or attention. The foundation of listening is respect, so don’t put up with folks who disrespect your boundaries or speak abusively.)

After a person is finished speaking, take a little bit of what the person said and add a little bit to it. Israel says this is called reflective listening, and it makes it possible for you not only to show the person that you’re listening, but also to give the person a chance to correct any misunderstandings.

India Ochs is a big fan of this technique as well. Ochs is a lawyer, activist and board chair of the organization CommunicationFIRST, which defends the civil rights of people across a wide range of disabilities that affect their ability to communicate verbally. (Important note: Ochs says the fact that she uses a voice assistant to speak doesn’t mean she speaks for all folks with speech disabilities.) She appreciates when others ask her to repeat something, because it shows they’re really listening. “Say what you understand, and then ask me to respond again,” she says.

“Impatience can often lead to interruption,” Ochs says, “which sends the message that you don’t care about what the other person is saying.” Ochs says that on many occasions, people’s lack of patience makes it impossible for them to hear her speak. For example, “If I am answering questions during a presentation and someone who might be getting impatient with the silence starts to jump in to answer. Or worse, ask another question as I am typing my answer to the first question, none of which represents being a good listener or a listener at all.”

When you’re listening with intent, it means you’re focusing on what the person is saying and leading with curiosity. Counterintuitively, this can be hard — especially with the people you’re closest to. “Sometimes when we’re close to people, we have a lot of assumptions about our shared understanding of things. And so we might listen sort of casually,” Israel says. She recommends expressing empathy and then trying to go deeper when the folks you’re close with talk about what they’re going through. The more you practice active listening in low-stakes, daily situations, the easier it will be to do it in high-stakes conflict, she says.

Listening is an act of power.

This bit of advice is taken from a piece written by the reporter and radio producer Sandhya Dirks. The rubric is specifically written for audio producers, but the idea most certainly applies to everyone. In the piece, Dirks asks: “How do we listen beyond the narrative that locks people in? How do we acknowledge our power to let people live out loud beyond the captured voice, in the full-throated body of their lives?”

When we listen to somebody, we have to listen beyond our own notions of what they’re going to say. We have to try to listen louder than our own thoughts and listen beyond the lines of our own privilege.

The podcast portion of this episode was produced by Andee Tagle.