Want to Learn How to Make Your Workplace Equitable for Transgender Employees After SCOTUS’ Landmark Decision? Here’s How to Get Started 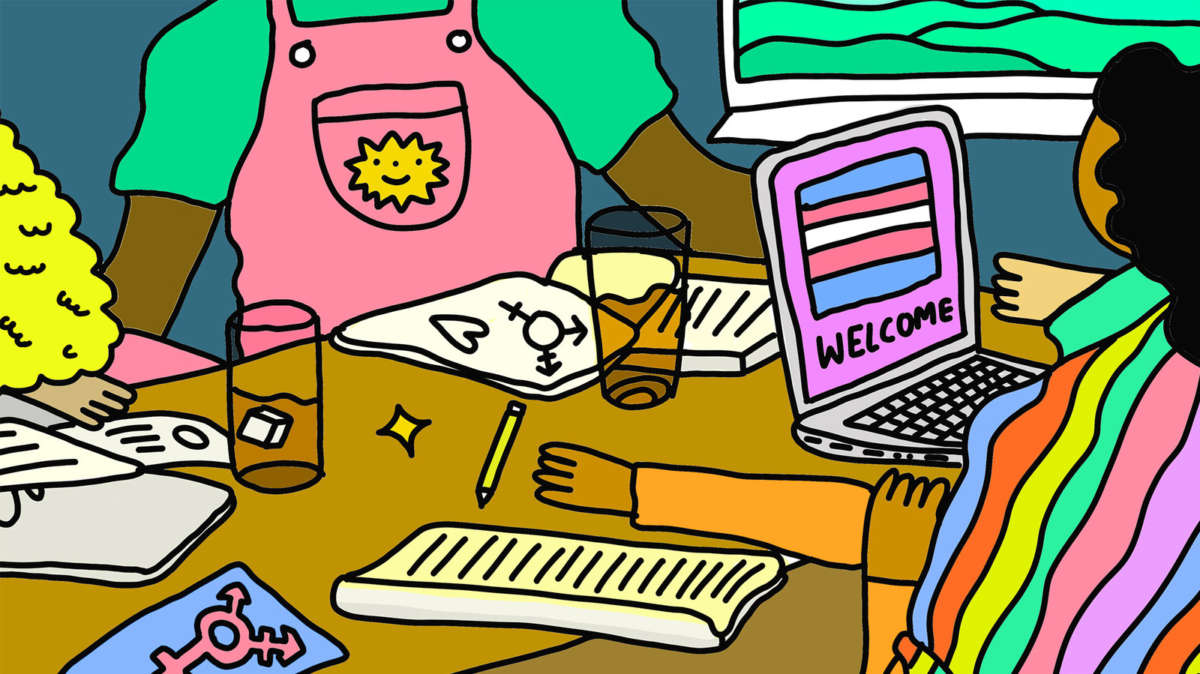 No matter where you work, being openly trans on the job can be tough — and it is simply not safe for many trans people to advocate for themselves. Seemingly innocuous elements of many jobs (think paperwork, dress codes and restroom access) can become obstacles for trans employees to navigate.

On June 15, 2020, the Supreme Court ruled that all LGBTQ people are protected under Title VII of the Civil Rights Act of 1964. Up until then, workers could be fired for being trans in 26 states.

While this ruling is a victory for the LGBTQ community, it doesn’t change the fact that, for decades, trans people have lived and worked in perpetual fear that they’d be fired for being transgender.

And it’s important to note that the ruling doesn’t mean workplace discrimination against trans folks just magically disappears — it just means trans people can sue for it now, if they have the resources to do so.

Even if employers and coworkers genuinely want to be inclusive, they often aren’t sure where to start. Here are four ways that you can make your workplace — digital or otherwise — more welcoming and equitable for trans people.

(A note for readers: This advice is primarily written for a cisgender audience. “Cisgender” and “cis” describe men and women whose gender matches the sex they were assigned at birth—in other words, people who are not transgender.)

1. Do your own research instead of asking intrusive questions.

It’s natural to be curious about experiences that are different from your own. However, that doesn’t make it appropriate to ask intrusive personal questions, especially at work. So, if you have questions about what it’s like to be trans, consider turning to books, videos, podcasts and other resources created by trans educators, rather than placing the burden on your transgender friends or coworkers.

Looking for a place to start? Try these recommended books and podcasts:

2. Be intentional about your language and correct mistakes.

In my work as a trans educator, I hear a lot of questions about how to navigate gendered language. Perhaps the most common question is how to handle pronouns — and, more specifically, what to do if you hear someone misgender a coworker.

Chase Strangio is the deputy director for Trans Justice with the ACLU LGBT & HIV Project, and he was part of the legal team arguing for trans rights in the Supreme Court. He recommends checking in with the misgendered person before taking action.

“And then, if that the person is struggling and needs support, then I think it can and should be a very simple and straightforward intervention,” says Strangio. A simple correction, such as “So-and-so uses they/them pronouns,” should do the trick.

Of course, correcting someone at work can feel awkward, scary and even rude. Keep in mind that it’s ultimately ruder to misgender someone, or to let that mistake go unacknowledged, than it is to quickly remind someone of your coworker’s pronouns.

“Especially if you’re someone in an organization that has power, making those corrections is critical,” says Strangio.

In fact, if you have institutional power within your organization, Strangio has other suggestions as well: “Whether it’s trainings or email signature pronoun use or exercises around non-binary trans identities, I think those things need to happen in the workplace to institutionalize practices and create systems of accountability.”

One last pronoun question: what if you are the person who misgenders your coworker? The secret is to correct yourself quickly and move on. According to author and journalist Meredith Talusan, over-apologizing can make the misgendered person feel like they need to comfort you, making an awkward situation even worse.

“It becomes about the cis person’s remorse over using the wrong pronoun,” says Talusan. “I think the best way to handle it is to just say that you made a mistake … then make a really conscious effort to not make that mistake again.”

3. Actively acknowledge and address inequities in your workplace.

Many cis people probably can’t imagine going an entire day without access to a restroom. But that’s the reality for many trans and gender nonconforming people across the country. When Strangio started at the ACLU, he spent years trekking to an entirely different floor of his building in order to access a single-user, all-gender bathroom.

“A lot of people would say, ‘You’re read as male; why don’t you just use the men’s bathroom?'” Strangio recalls. “I think there is this lack of understanding, both of past trauma around single-sex spaces that many trans people carry, and also… that people’s identities may not be entirely binary and that forcing people into those spaces can be really harmful.”

The ACLU now has ample all-gender bathrooms, which Strangio describes as “a huge and important victory of internal advocacy within the organization.”

This story illustrates the difference between equality, inclusion and equity. Strangio may have been included (i.e., hired) and treated equally (that is, given access to the same single-sex restroom as everybody else). But until the ACLU added more all-gender restrooms, he was not being given the same basic rights — in this case, safe and convenient restroom access — as his cisgender coworkers. In other words, he was not being treated equitably.

The conclusion? It’s vital to look beyond inclusion and push for true equity. Otherwise, workers with marginalized identities may always be struggling to secure the same basic rights that other employees may take for granted.

“We’re deeply, deeply affected by our social environment,” says Talusan. “And if we are not in a workplace where we acknowledge and try to address those inequities, then it becomes very difficult for people from marginalized backgrounds to work there.”

4. Work as a team to create change.

“Cis people can contribute to an environment that is conducive and friendly towards trans people,” says Talusan. “But at the same time, they always have to involve and consult with trans people.”

Be sure your help is wanted, and be aware of what you’re asking. For instance, rather than “volun-telling” your trans coworkers to lead an equity committee in addition to their regular job, you can ask your manager or HR department to bring in a professional trans consultant, who can help you make sure that your workplace is truly equitable.

Full disclosure, I have my own equity consulting company, but don’t take my word for it; Talusan says that “in many cases, trans consultants are invaluable, especially in situations where a company is dealing with these issues for the first time.”

Advocating for change can be challenging and intimidating, so there’s no shame in asking for help. Find a group of likeminded coworkers, and team up to tackle trans inequities.

Your team can also look into the work of outside organizations, like:

· Sylvia Rivera Law Project works to improve access to respectful and affirming social, health and legal services for the community, regardless of gender identity and expression, income or race, and without facing harassment, discrimination or violence.

· Transgender Law Center is a trans-led organization that works to change policy and law in order protect and advance the rights of transgender and gender nonconforming people.