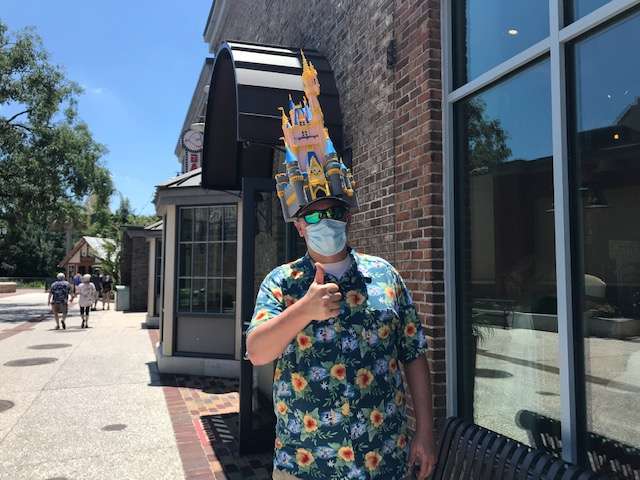 Signs around the venue and verbal reminders from staff reminded visitors to maintain social distancing and practice good hand washing.

90.7’s WMFE Danielle Prieur was there. She introduces us to one of the guests appropriately named Walt.

When I met Walt Post after getting my temperature checked at the Disney Springs entrance on Wednesday, he was taking his picture with a small child wearing a Disney face mask.

Walt’s hard to miss-he’s over six foot tall, and wears a Hawaiian shirt, and khakis. But it’s his hat that makes most people want to pose with him.

“I made it, it’s going to be the anniversary’s paint job that they’re putting on the castle.”

Walt lives a mile from the venue. He estimates he’s already taken dozens of pictures with visitors.

“It’s definitely I think like a novelty thing so people are like ‘oh my God look at that’. So yeah, it’s pretty cool.”

He said he’s not worried about taking those pictures or being out in public – even with posters plastered throughout the venue warning about the risk of coronavirus.

But he’s paired the hat with a face mask just in case.

“I don’t have any children or elderly people at my house so I’m not overly worried from that aspect. Like we’re not really the at-risk people. So I’m good.”

Walt’s not only a massive Disney fan, but his wife works at the parks.

Welcome back! Guests were greeted by cast members at Disney Springs this morning as part of the phased reopening. Keep an eye on the Disney Parks Blog for more details.✨ pic.twitter.com/aOzQCQxR8q

He says Disney Springs’ opening isn’t just huge for the company, but other theme parks who are trying to make decisions about when they should bring workers back.

“But in the world of business they’re a giant. So if they think it’s time to start you know crawling out of the cave a little bit, I think that’s  going to show a lot of other people that we should as well.”

About a month after the theme parks and Disney Springs closed, 100,000 workers were furloughed without pay.

Walt’s wife was one of the lucky ones.

He said he’s ready for the parks to open back up again for people who didn’t get as lucky – and because of what they mean for fans here in Orlando and around the world.

“I think it’s an example of everything’s that right. Everything that can be right. And yes it’s a business and I get that. I have no delusions.”

Standing in the sun outside of Chapel Hats – which he says is strangely appropriate – he puts it simply.

“It’s just a place where you can go and forget about how awful life can be sometimes and that’s what it is for me.”

And when I ask him to take a picture, he answers excitedly.

Walt and me. Photo: Danielle Prieur

To listen to the audio postcard, click on the clip above.