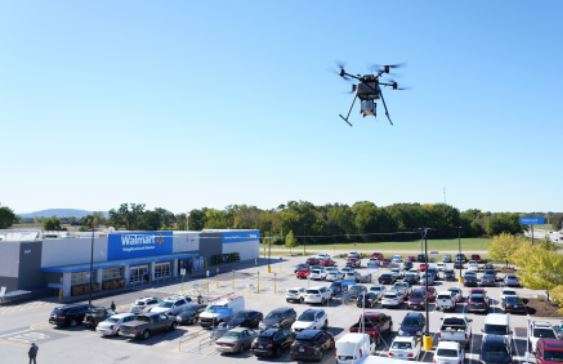 Walmart announced on May 24, 2022, that it is expanding drone delivery to 34 sites, including stores in Florida, by the end of the year. (Courtesy: Walmart/WUSF)

From dropping packages to collecting data, Tampa and Orlando residents can expect increased buzzing from Walmart drones outside their front doors.

Walmart plans to start delivering orders to customers via drones in six states, including Florida, the company announced Tuesday.

Stores in Arizona, Arkansas, Texas, Utah and Virginia will also offer the service, which could reach up to 4 million U.S. households.

Between 8 a.m. and 8 p.m., people will be able to order tens of thousands of eligible items totaling up to 10 pounds, and have them delivered within 30 minutes for a fee of $3.99.

Walmart’s DroneUp delivery network will expand to 34 sites by the end of the year, including Tampa and Orlando.

A press release said that participating stores will contain a DroneUp delivery hub with a team of certified pilots, operating within Federal Aviation Administration guidelines. Orders will be fulfilled from the store, packaged, loaded into the drone and lowered into customers’ yards using a cable.

“After completing hundreds of deliveries within a matter of months across our existing DroneUp hubs, we’ve seen firsthand how drones can offer customers a practical solution for getting certain items, fast. More importantly, we’ve seen a positive response from our customers that have used the service, said David Guggina, senior vice president of innovation and automation, Walmart U.S., in a press release.

“In fact, while we initially thought customers would use the service for emergency items, we’re finding they use it for its sheer convenience, like a quick fix for a weeknight meal. Case in point: The top-selling item at one of our current hubs is Hamburger Helper.”

“For example, a local construction agency can work with DroneUp to monitor on-site job progress through aerial drone photography,” said Guggina in the release.

“Not only will the added revenue help offset the cost of delivery, but it also serves the entire drone industry by gathering more flight data as we work together to expand drone operations in a safe and regulated way.”