Walking From Key West To Tallahassee To Raise Awareness For Cancer 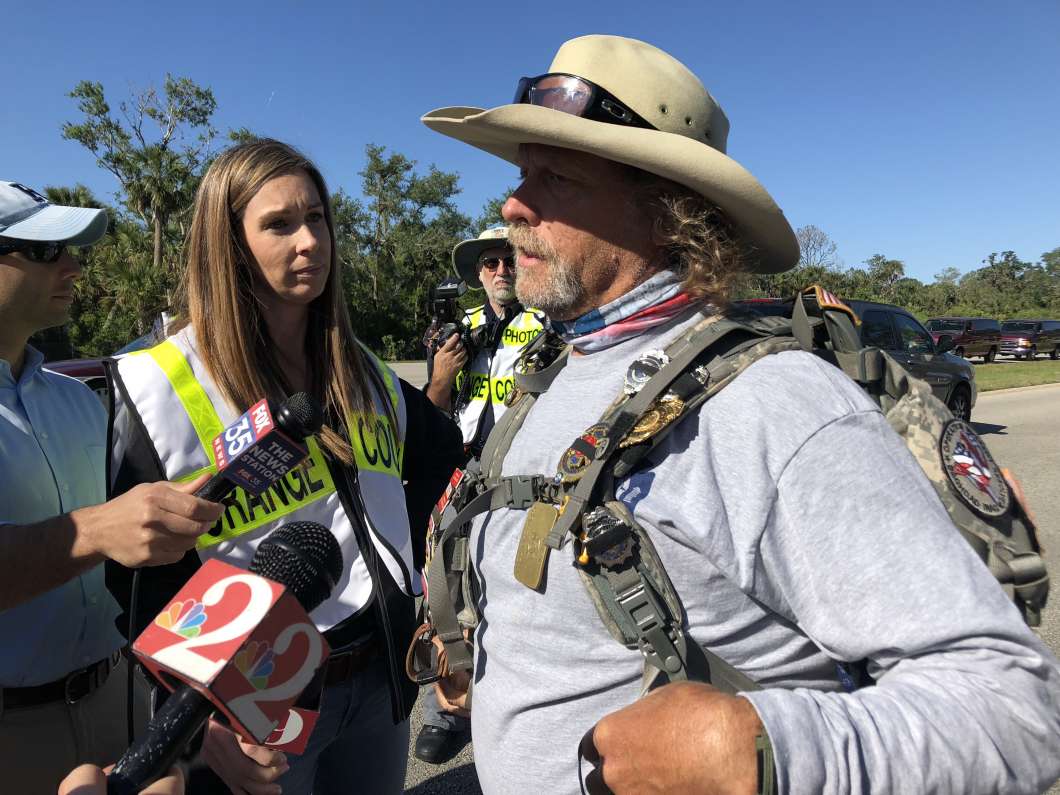 Tom "Bull" Hill is walking from Key West to Tallahassee to raise awareness for cancer.

A retired Central Florida firefighter is walking from Key West to Tallahassee to raise awareness for cancer.

At the border between Brevard and Orange counties, a line of fire trucks with their lights on greet Tom “Bull” Hill as a hero when he arrives to walk across the county.

Bull is bronzed, wearing a wide brim hat, long sleeves, and a handkerchief around his neck to block the sun. More than 100 firefighters surround Bull, each ready to share the load.

His backpack, which jingles with each step, is a mosaic of service shields and patches of Florida firefighters who have died from cancer. He started with one backpack and 87 patches in Key West. He now has three backpacks – and will likely have a fourth backpack by the time he leaves Central Florida.

“So when I came out of the Keys, it was this pack, and this has started since Miami,” Bull said. “Inside are ashes now of three firefighters. So 300 miles in, and we have 600 firefighters or more now.”

WMFE and ProPublica are spending 2018 investigating post-traumatic stress disorder in first responders. If you, or someone you know, are affected, tell us about it here.

It will take weeks for Bull to finish his journey from Key West to Tallahassee. It’s been dubbed: The March of the Bull. Bull retired from Orange County after 31 years as a firefighter.

He lost two friends to cancer – including Stephen Vanravenswaay, nicknamed “Shakey.” That’s what started this mission.

“Well, I don’t know if I would call it a mission as much as just fulfilling a promise to two guys,” Bull said. “It’s very simple to that. Shakey asked me to promise to help make a change. Shakey passed away. He was ashamed to be a fireman for the state of Florida, were his last words to me because he left his family with nothing.”

So what is Bull asking for? A change to state law.

Currently, Florida law recognizes that heart disease, high blood pressure and tuberculosis are caused by working as a firefighter. And that’s important because it makes those conditions covered by workers’ compensation coverage and disability pensions. And now Bull and other firefighters want to add cancer to that list.

According to the National Fallen Firefighter Foundation, 33 states cover firefighters for one or more cancers this way. Florida does not.

Erin Kobetz is the associate director of the Sylvester Comprehensive Cancer Center in Miami, which has gotten state funding to study cancer in firefighters.

“I think it’s generally understood that firefighters are at an increased risk of developing and dying of cancer,” Kobetz said. “I think what hasn’t always been understood is the why.”

Kobetz said Bull’s journey across the state is connecting emotionally with people. And Bull’s march isn’t just happened in real life. Online, he has collected more than 10,000 signatures advocating expansion of Florida disability and workers’ compensation laws for firefighters. Organizers hope to have 50,000 signatures when he reaches the state capitol.