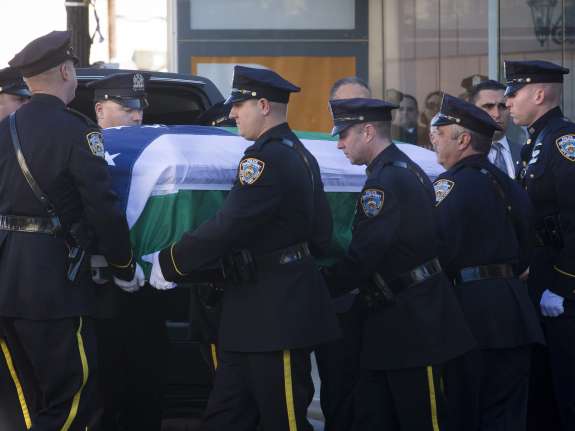 New York City police officers are holding a wake this afternoon to honor officer Rafael Ramos, one of two patrolmen who were killed last weekend by a gunmen whose motive may have included revenge for the deaths of two unarmed black men at the hands of authorities.

“The flag-draped casket carrying slain New York City officer Rafael Ramos arrived for his wake at a Queens church Friday amid a sea of blue, as fellow officers in crisp uniforms lined the streets outside and served as pallbearers.

“Eight officers carried the casket inside as other cops saluted and stood at attention outside the entrance to Christ Tabernacle Church.”

The officers were shot and killed on Saturday by 28-year-old Ismaaiyl Brinsley, who left online threats and postings suggesting the assault was in response to the deaths of Eric Garner and Michael Brown. Garner was killed in New York’s Staten Island in July after a police choke-hold; Brown was shot and killed in August in Ferguson, Mo. Both Garner and Brown were unarmed.

“Today we weep with the Ramos family, the New York City Police Department and our nation as we mourn the loss of our dear brother,” Pastor Ralph Castillo said before the start of the wake, according to The Associated Press. “We loved Rafael Ramos. We loved the way he served people, we loved his faithfulness and the way he served people, and we’re going to miss him a great deal.”

The funeral for Ramos will be tomorrow. Funeral plans for Ramos’ partner, Wenjian Liu, have not been announced as yet.

Since last Saturday’s killings, the NYPD says it has arrested six people accused of threatening police. As NPR’s Doreen McCallister wrote on Thursday, authorities in New York were closely monitoring such threats and stepping up security at some precincts in response.