Wait, Wait, Don’t Inaugurate: Why The U.S. Takes So Long To Change Presidents 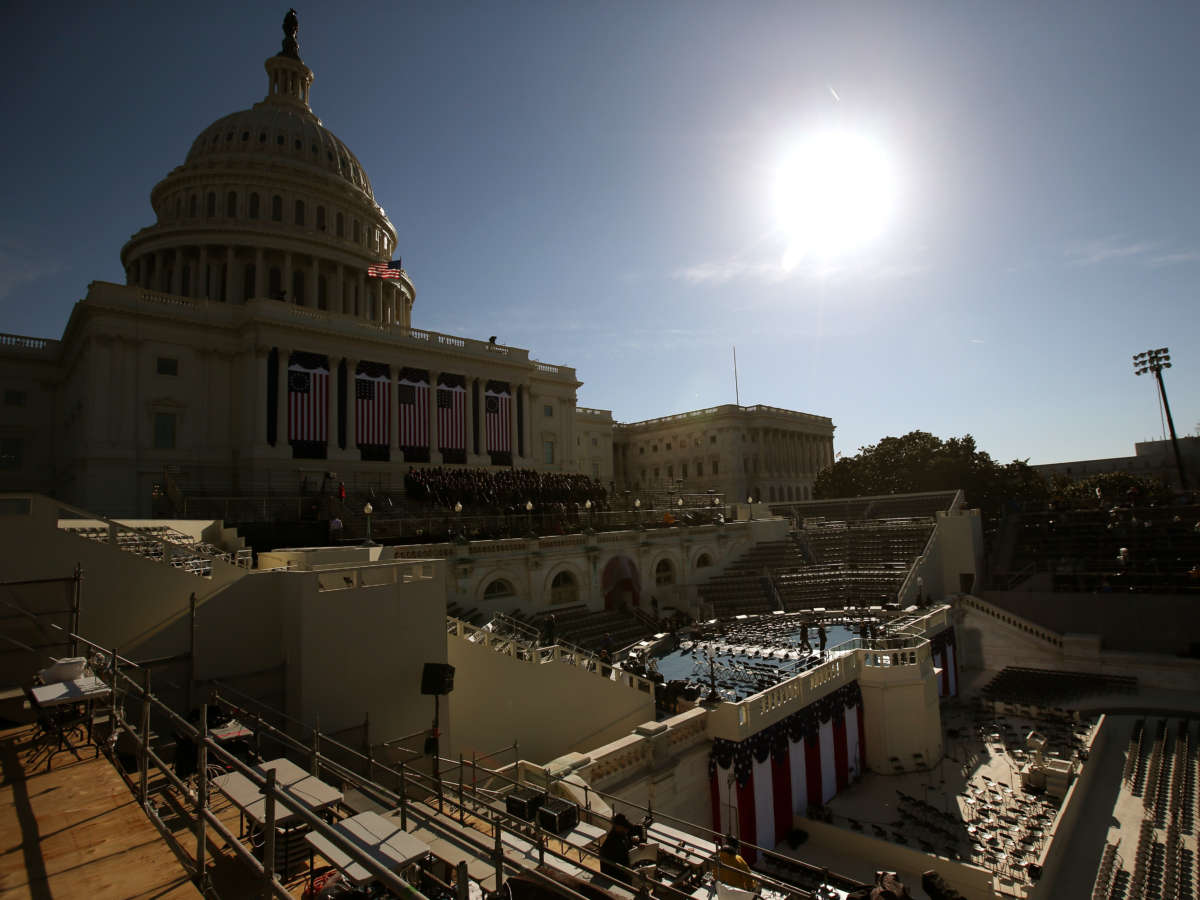 The stage at the U.S. Capitol ahead of President Barack Obama's second inauguration in 2013.
Image credit: John Moore

President Trump’s refusal to concede and the delayed transition to the administration of President-elect Joe Biden have raised many questions about the transfer of power in our system.

One in particular has long been asked: Why do we wait until the latter part of January to swear in a president we elect in November? Put another way: How is it that the Brits can have a newly elected prime minister meeting with the queen to form a new government within a day or two, but we need 10 or 11 weeks to install a new crew?

Well, since you asked, our transfer of power originally took much longer. It was initially set for March 4, though in 1789 a bad winter storm delayed the swearing-in of George Washington until April. Thereafter, the early March mandate was respected for nearly 150 years.

A bad winter was a major obstacle in 1789 because so much of the system literally ran on horsepower. The best overland option was a horse, or a horse and buggy, or a horse-drawn coach, over roads that were iffy at best — especially in winter. Sometimes it was faster to get a boat.

After a national election, many riders had to mount many horses to assemble voting results from every local voting jurisdiction in the original 13 states. Still more would need to saddle up so that the results could cross state lines and make multiday trips, often in inclement weather.

The second thing to remember is that the president is not actually legally elected in November. Officially, the Electoral College does the deed, and that institution does not do its thing until mid-December, more than a month after the popular vote is in.

This year, the day is Dec. 14, following the constitutional calendar that specifies the first Monday after the second Wednesday in December. That is when the official electors empowered by the popular vote will convene in their respective state capitols to vote.

That was true back in the beginning, too. So imagine how much time it took, in the early days with the original 13 states, to collect, tabulate and certify the votes of the eligible ballots. Imagine, too, the time it took to get the necessary information to all relevant authorities and to the electors themselves, who were presumed to be men from the upper echelons of social and political authority in their respective states.

These men would gather in their respective state capitols on the designated day and elect the president. Then it would take time, again, for official documents to be conveyed and for news to travel and be disseminated and digested. The new chief executive would be informed and begin assembling his top appointees to take office.

Given the relatively glacial rates of transportation and information sharing two centuries ago, it does not seem unreasonable that a newly elected president might then need weeks to formalize a team.

Thus the original March 4 date seemed to make sense, especially if one was planning an inauguration ceremony to be held outdoors (as all have been, with the lone exception of President Ronald Reagan’s second in 1985). By March, the weather should be more reliable, at least in theory, although it wasn’t so for the longest inaugural address (and shortest presidency) on record.

In 1841, William Henry Harrison took the oath of office hatless and coatless on a cold day. The new president spoke for nearly two hours and then went to parties in his wet clothes. He soon developed what is believed to have been pneumonia and died a month into his term.

But after a century and a half, Congress and the state legislatures were ready to salute the progress that had brought paved roads, railroads, motor cars, telegraph wires, telephones and radio to the tasks of travel and communication.

Congress approved, and the states quickly ratified, an amendment to the Constitution moving the date of Inauguration Day to Jan. 20. It was 1933, and the new date took effect with the 1937 inauguration of a reelected President Franklin D. Roosevelt. The new date has held firm ever since.

At times, the hiatus has proved historically significant. In 2000, it allowed time for courts to process a flurry of lawsuits over the contested results in Florida. After five weeks and a ruling by the U.S. Supreme Court, the state delivered its electors to George W. Bush on the basis of just 537 votes. That mattered, because by then the Electoral College was about to meet and whichever candidate won Florida was going to reach the 270 electoral votes needed to win the White House. Bush wound up serving eight years.

In 2004, the National Commission on Terrorist Attacks Upon the United States, better known as the 9/11 Commission, concluded that the five-week struggle to determine the winner of the 2000 presidential election weakened the ability of the U.S. to detect and deter the plotters of the terrorist attacks of Sept. 11, 2001.

Just as ominous was the period after the election of Abraham Lincoln in 1860. In the four months he had to wait to take office, seven Southern states seceded and began seizing federal forts within their state lines. Any last chance of heading off the Civil War was lost.

And in the depths of the Great Depression, when banks were failing and industries collapsing, little or nothing was accomplished while the nation waited four months for FDR to take over from President Herbert Hoover, the man he had defeated to get the keys to the White House.