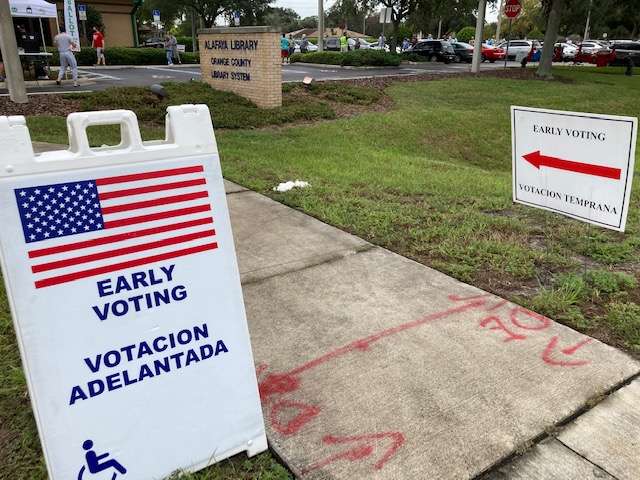 The line was wrapped around the Alafaya Branch of the Orange County public library today on the second day of early voting.

At the back of the line near residential homes off Colonial Drive, Jason Breslin stood wearing a face mask and holding a Diet Pepsi.

Breslin had been waiting in the line for 15 minutes but he said it was worth the wait.

“I’m a citizen and every election I think is important. I think it’s important for everybody to get out, get their voices heard. Otherwise, don’t complain.”

Jennifer Mennicke had been waiting for a half hour. She said she was worried about leaving her kids, 9 and 6 to do their virtual school by themselves.

But she says it’s crucial to vote in this election in particular.

“100 percent the reason I’m here is to get Trump out of office.”

Ahead of her in line, Stephen Cullum said he, his wife and granddaughter had been in line for 40 minutes. His wife has mobility issues so she used her walker to sit in while waiting.

“We’re drifting toward facism in my opinion. I’m 67 years old. Never seen anything like this.”

Voters at the site, recommended bringing water, a snack and a folding chair to sit in.

Early voting runs at the site through November 1.