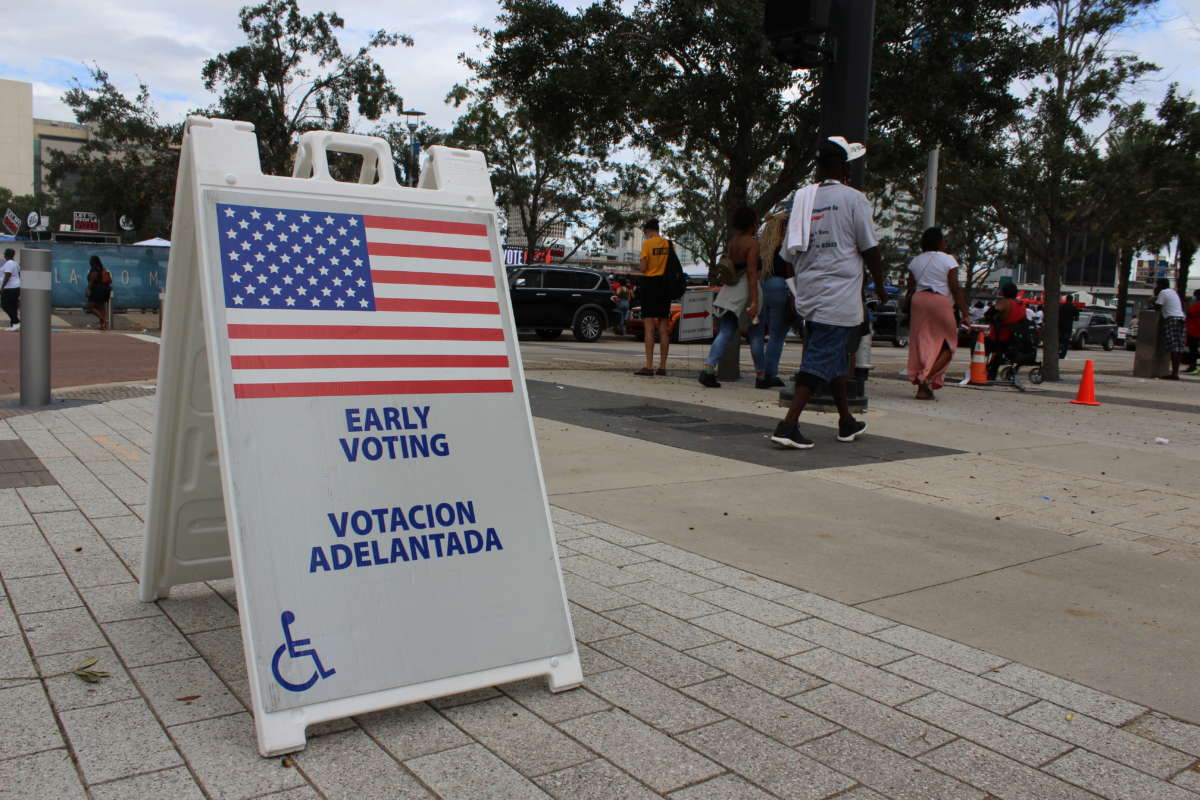 Early in-person voting has been available in Orange County since Monday. Photo: WMFE/2020

Early in-person voting is underway throughout Florida this week.

Election day for the primary is Tuesday, Aug. 23. It includes non-partisan races for ballot issues, judges and some local offices, like school board members, and Democratic and Republican primaries for national, state and local offices.

Some counties — including Orange and Osceola — began in-person voting early last week, and Lake County on Thursday. The other Central Florida counties started on Saturday.

Most of them will wrap up early voting on Saturday of this week. However, the supervisors of elections in Orange and Osceola counties will continue to offer early voting on Sunday, Aug. 21.

As of Sunday evening, Orange County had recorded 54,168 ballots — 6.3% of registered voters — by mail and in person.  But in Sumter County, where in-person early voting started Saturday, 17% have already voted.

The locations and hours for early voting can be found on the supervisor of elections websites for each county.

Here are some early-voting and vote-by-mail tips with help from Lake County Supervisor of Elections Alan Hays.

Getting the information you need

Hays said voters have two ways to get the information they need on early voting and more.

Registered voters will need photo and signature ID to vote in person.

Generally, that means a driver’s license or ID card issue by the Department of Motor Vehicles.

But Hays said there are other options, too. Those include a U.S. passport; a debit or credit card with your picture; military or student ID; retirement center, neighborhood association, public assistance or veterans health identification card; concealed carry license; and any government ID.

Can voters with unused mail-in ballots vote in person?

Yes. Hays says the voter should surrender the unused ballot at the polling site.

“When you get there,” Hays said. “You show them your identification card with your signature and your picture on it and give them the ballot. They will have the clerk to cancel the ballot and it goes into a separate envelope that comes back to our office every night of canceled ballots. And they will issue you a new ballot for you to vote in person.”

If the voter requested but does not have the unused mail-in ballot, they can still vote in person.

USPS: Give us a week to deliver your mail-in ballot

The U.S. Postal Service recommends mailing the vote-by-mail ballot at least a week before Election Day to allow for unforeseen events and bad weather.

“Unfortunately,” Hays said, “even though it’s right here in Central Florida, sometimes it can take four or five days for the mail to be delivered to us.

“By law, we must have physical possession of that ballot no later than 7 p.m. on election night. The only exception to that is ballots coming from overseas.”

Voters can also drop a mail-in ballot off at an early voting site or the supervisor of elections office.

“We have these secure ballot in-take devices,” Hays said. “That’s what they’re called now instead of drop boxes, but everybody knows them as a dropbox. We have those at all of our supervisors offices. We also have them at every early voting site.”

He said you shouldn’t try to use the mail-in ballot at your regular polling place on election day itself. That’s because, legally, it needs to be at the supervisor of elections office before 7 p.m. that day, not at the polling place.

“So if you if you still have your vote-by-mail ballot on Election Day, you need to bring it to our office or take it to the polling place and vote a regular ballot,” Hays said.