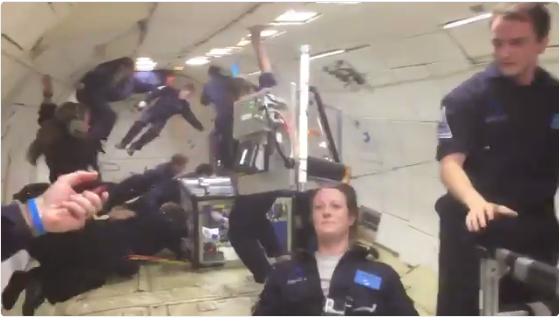 Planetary scientists and students from the University of Central Florida are using a plane similar to the ‘Vomit Comet’ to figure out how dirt behaves in the solar system.

The UCF Center for Microgravity research wants to figure out how regolith, or dirt, behaves in places other than earth like the surface of Mars, the moon or even an asteroid.

To do that the team has to simulate microgravity, so they loaded the experiment on ZERO-G’s plane that flies in parabolas, or peaks and valleys. As the plane reaches the top and begins to dip the passengers and the experiment experience about 20 seconds of weightlessness.

While in microgravity, the experiment fires a ball at different types of dirt and a camera inside records what happens to the dust.

“Why are we shooting marbles into dirt? Well, it’s fun,” said Assistant Professor Adrienne Dove, “and we want to see what happens on things like surfaces of asteroids, the surface of the moon, places where there is pretty low gravity but lots of dirt regolith.”

The team at the Center for Microgravity Research will review the camera footage and track the particles of regolith as they move through the experiment’s chamber.

“That tell us a lot about if we’re taking rovers or humans or anything like that to another surface and it touches down on another surface,” said Dove. “How much dirt is going to get kicked up?”

She said understanding how regolith behaves in these conditions can help future missions for robots or human landers get to places like the Moon or Mars.

Undergraduate students from UCF helped build the experiment and got to fly on the flights. Dove says no one threw up.

The team at UCF is planning on more experiments next year, including another ZERO-G flight and trips on sub-orbital rockets.