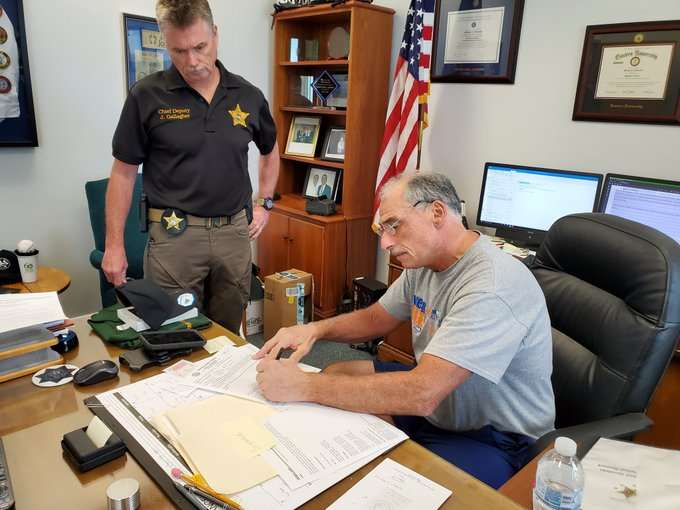 Volusia County Sheriff Mike Chitwood says someone up there really likes him after he survived getting hit by a car on his bike yesterday.

Chitwood says the first thing that went through his mind when he got hit is what happened to Frank Scofield, one of his deputies who was killed after being hit by a car in 2019.

He says as he lay in the road after flying off his bike, with a car mirror in his back, he also thought about NBA star Shawn Bradley who was paralyzed in a similar accident in Utah.

“I escaped the least injured. How many other people in our community or in our state are dead or are severely maimed because of distracted driving.”

Chitwood calls Allen Ramos the WastePro driver who pulled over to help him and to call 911 a real-life guardian angel.

Ramos’ truck video of the accident was used to arrest 20-year-old Paige Bergman who says she was shopping on Amazon on her phone when she hit Chitwood.

Chitwood has a broken fibula, ten stitches on his back and an aching head, but he says it’s much better than the alternative.

“In actuality, this is a societal problem. There’s not enough cops in the world, in the market to just focus on texting and driving. Somewhere along the line, responsibility has to set in upon the drivers of the vehicle.”

In a statement on Twitter, Chitwood wrote, “Again, thanks to all of you who have been so concerned. It is a privilege to be your sheriff and to know so many of you care.”

Chitwood was hit biking at around 4:30 pm yesterday at the intersection of Town West Boulevard and Daylily Street.

Out of the hospital and back to work @SheriffChitwood pic.twitter.com/3bxB5eiG2d