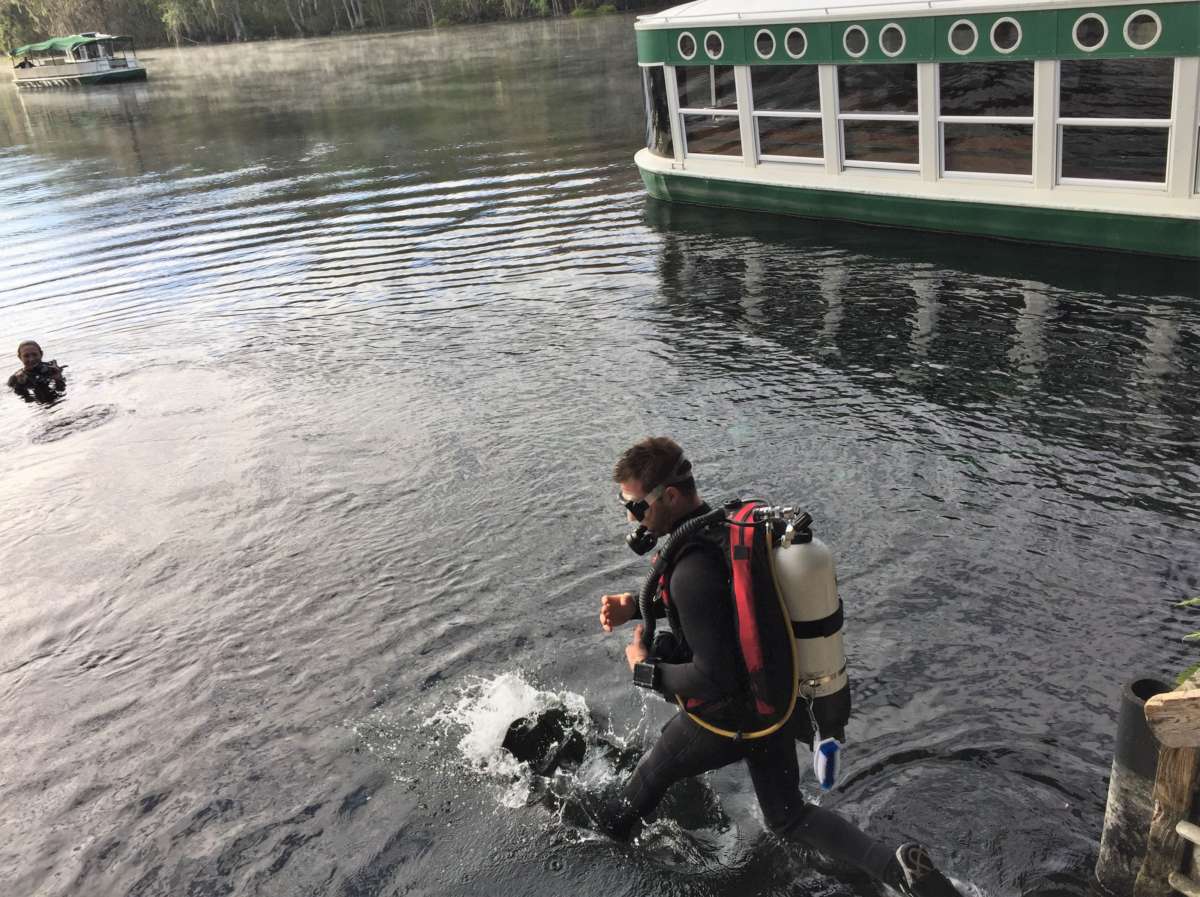 Since 2014, a team of divers has volunteered at Silver Springs State Park, where Florida’s largest freshwater spring has seen a drop in its flow over the years and a worrying rise in nitrates.

The compounds cause algae to grow on the park’s boats and underwater features. That’s where the divers come in. They scrub it off.

On a Sunday morning in February, it’s chilly, 48 degrees. A ragged mist, lit by the morning sun, floats over the famous headwaters of Silver River.

Alan Youngblood, a member of the Silver Springs Professional Dive Team, photographs a glass-bottom boat as it approaches the dock. Photo: Joe Byrnes

The Silver Springs Professional Dive Team – including filmmaker Mark Emery – will work underwater for about an hour.

“And what we’re doing is in general just cleaning all the algae off the glass in the glass-bottom boats and also on the old statues on the bottom and on other items down river,” Emery says.

Founder Joe Wallace says several of the team’s 37 members meet at the park once a month.

“We love to dive in Silver Springs because it’s not open to divers,” Wallace says. “So you can’t dive out here unless you’re part of some projects like this.”

They’ll review their plans, pose for a group photo, don their scuba gear, grab their brushes and splash one by one into the clear spring.

They enter a world of waving eelgrass, darting fish and sometimes, between the white clouds, sunlight streaming from above.

The glass-bottom boat captains bring seven tour boats in, one at a time, and pull out over the bowl near the Main Spring. They stop there and let the divers scrub the bottoms. From above, they are a whirl of arms and masks and fins, with brushes swirling against the glass.

Meanwhile, other divers are using sponges on the faces of 50-year-old Greek statues put there for an episode of “I Spy.”

It’s light work now, but several years ago they had to take a pressure washer to the statues. Wallace says they were trailing long strands of algae like hairs on a troll doll.

“Bright fluorescent green looking stuff,” Wallace says. “That’s what we would see. We would see these long streams, a foot long or so or maybe more, hanging off of everything down there, from the rocks below to the statues themselves.”

There lies one of the big challenges for Florida’s springs — rising levels of pollution, especially nitrates from farms and septic systems, that feed the growth of algae.

“The eelgrass, instead of being beautiful green and flowing, it was brown and looked like it had been covered with caramel sauce or something,” Wallace recalls.

Some team members have witnessed the decline. Recently, they say the algae was knocked back, thanks to heavy rains that increased the flow.

Members of the Silver Springs Professional Dive Team prepare to clean the bottom of a boat on the Silver River. Photos: Joe Byrnes

But no one has more experience observing Silver Springs than Oscar Collins, who has piloted glass-bottom boats for 50 years.

“The only thing I seen really different (is they) have more algae on the grass than what we usually have,” Collins says, shortly after steering his boat to the dock. “The water’s about the same. The population of the fish is down compared to what it used to be.”

It’s still beautiful, he says, and the people still love it.

Case in point: Christine Chen, a master diver from Toronto, who joined the team as a visitor.

“I’ve dived all over the world, seen a lot of beautiful places,” she says. “First time in the spring, I’ve got to say it’s, like, really beautiful. It’s breathtaking, like the way the sun shines through and you see the different color of the spring. It’s one of my favorite experiences, for sure.”

The water that percolates underground to the springs comes from many miles around. In addition to nitrates, Emery says, it carries whatever else we may have added, like drugs and caffeine.

“You’ll find surprising things in Silver River and many, many other springs, in just trace amounts,” the filmmaker says. “But it’s time to wake up and do something about it.”

As the team leaves the dock, visitors are entering the park, and the boats head out for their tours with clean bottoms.