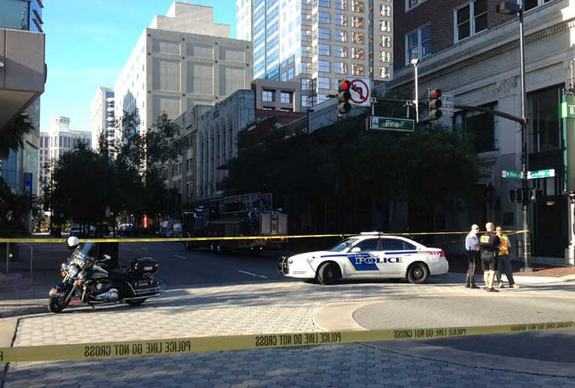 The night shouldn’t have ended this way. It was hip-hop night at Vixen Bar on Aug. 18. There was a DJ playing, and an eyewitness account published on Orlando Culture Shock says it was packed for a Monday night.

Sometime after midnight, a 23-year-old named Kody Roach entered the bar. According to police reports, he was wasted and belligerent, bumping into people spilling drinks. And he had a gun.

Police were called to the bar at around 1:45 a.m. to respond to a call for a “white male waving a gun around.” When two officers arrived, Roach had been thrown out and had banged on the door with the gun, trying to bet back in. It didn’t work, so he went down the street to buy a slice of pizza, an arrest affidavit says. Then he returned to the bar.

In the meantime, people had called 911. One reported Roach had “shot up the club,” another that he’d fired shots into the club. Officers thought they were about to encounter an armed criminal with deadly intent. Little did they know that the gun Roach had in his waistband was empty – no bullets, no shots fired. Empty.

They yelled at him to get down on the ground and tried to use a Taser on him. It didn’t work. Roach turned and appeared to be reaching toward his waist, and one of the officers opened fire. He shot nine times. Five of those bullets hit and injured Roach. One killed a woman inside the club named Maria Fernanda Godinez.

Roach has been charged with first-degree murder in this case, because even though he didn’t kill the woman, his actions, police say, caused officers to. Some are debating the use of deadly force in this situation; others say officers did the best thing they could under the circumstances. It’s impossible to say for certain what Roach’s intent was, or how people reported that a man with no bullets had shot up the club. But three lives are changed for good and the night definitely should not have ended this way.