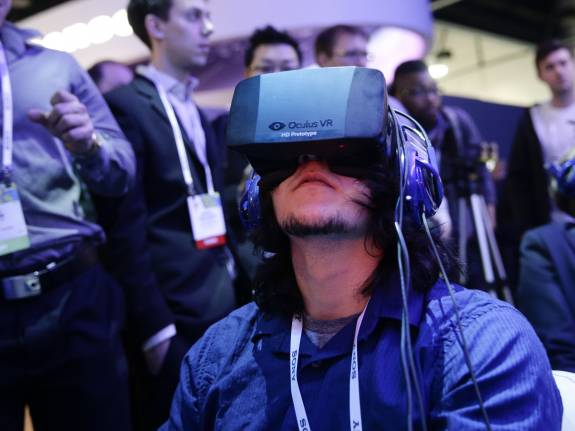 After a decade out of the spotlight, virtual reality has returned to pop culture — and with a vengeance.

Facebook bet big on the technology earlier this year, purchasing the pioneering company Oculus VR in a $2 billion dollar deal. VR has taken center stage at events like South By Southwest and Comic-Con as marketers have turned out immersive experiences for everything from Game of Thrones to X-Men.

Tucked into all that buzz is an uncomfortable fact about VR: Some people experience a kind of motion sickness, known as “sim sickness,” when they use head-mounted virtual reality displays like the Oculus Rift or Sony’s Project Morpheus prototype. And even virtual reality game makers aren’t immune at first.

E McNeill, creator of the award-winning VR game Ciess and its follow-up Darknet, tells us that he experienced “general nausea and malaise” in his early days developing for VR.

“I just wanted to lie down and close my eyes until it went away, which usually took about half an hour,” McNeill says. “If you know what it feels like, you can stop early and it doesn’t get so bad, so I only really got knocked out of commission once or twice.”

The most commonly discussed symptom of sim sickness is nausea. But when it comes to an ailment, the potential effects are much more complex, according to researcher Dr. Kay Stanney.

“Quite frankly, I’m not worried about the puke,” says Stanney, president and founder of Design Interactive Inc., and co-author of a number of studies on virtual reality that are referenced in the hardware development community.

Stanney says for VR companies’ marketing purposes, there’s even a positive spin that can be applied to sim sickness. “They can be like a big theme park in Orlando where what they do is say it’s a feature, not a bug. ‘This ride is so awesome, it’s gonna make you puke,’ ” she says.

Stanney is concerned about prolonged VR exposure, and what happens after users take their headsets off and “return” to the reality. One problem is the resulting “postural sway,” or postural instability and hand-eye coordination challenges.

“We equated the after-effects of postural sway to blood alcohol level,” she says. “[Users will] be done gaming and they’ll be drunk, physiologically, and then they’ll get in a car. Those are the things that I’m worried about.”

This doesn’t necessarily mean that avid VR users are suddenly going to become a threat on the roadways of the world. Hardware makers have been working diligently to counter the effects of sim sickness.

Guy Freestone, a product manager at TVPlayer Ltd. in the United Kingdom, has been studying VR for the same reason that Hollywood has shown interest: Traditional media see the technology as the next great frontier.

Along the way, he’s begun to draw a distinction between sicknesses that are brought on by hardware limitations and those that can be dealt with in software. Freestone believes that Oculus, at least, has nailed the hardware issues.

“Motion sickness caused by inappropriate software implementations (sudden and jerky movements outside of the player’s control, for instance) is still an issue however, and will need to be addressed by the game and software developers,” he wrote in an email.

The heart of the problem is that VR creates a disconnect between what the eye sees and the body feels. Exactly how that comes into conflict is a murky area. As Stanney points out, motion sickness as a whole, and not just as it relates to virtual reality, is not fully understood.

What we do know is that who controls the motion is important. In this way, VR is similar to riding in a car where passengers are more likely to experience motion sickness than drivers, because drivers can anticipate where the car will be going.

The driving experience, however, might just point the way towards designing software experiences that don’t aggravate the conflict between the eye and the gut.

According to Freestone, “cockpit games in VR are one of the most enjoyable experiences. Your brain concludes that you are inside something that is moving, so therefore you must be moving too, even if you don’t feel like you’re moving.”

Time is another factor on the side of virtual reality hardware makers. With enough exposure, the body itself appears to be capable of coping with the altered state of VR. Game creator E McNeill, for instance, no longer experiences the worst of sim sickness after months of regular exposure.

Stanney compares this to what scuba divers go through.

“We know that underwater divers can develop what’s called a dual-adaptive state,” she says. “They hit the water and there are a lot of cues that are really strong: the pressure of the water, the temperature of the water, the visual cues themselves. There are a lot of cues that are very, very strong to say, ‘Hey, I’m in a different world.’ They get in that world and they take on their underwater state. Then they get out of the water and all of a sudden the cues are very, very different again.”

This might help explain why regular exposure to VR can lead to less motion sickness. It may even explain gender differences in sim sickness susceptibility. Stanney thinks that the amount of non-VR gaming that young men do gives them an advantage when adapting to VR systems.

McNeill thinks there is a way to design VR games with an eye towards stopping the worst effects, and says by the time VR hits the mainstream, “the hardware and software will be mature enough to avoid most of the causes of sim sickness.”

Stanney sees the problems as more serious, but shares some of McNeill’s optimism. She also points to hardware-based solutions.

“There are accelerometers on these headsets and they could be used to say, ‘Oh, Johnny is in trouble, look at all this sway that’s going on, he’s really unstable right now. Get the heck out of the system.’ We can do the right thing,” she says.

Doing the right thing happens to be in the best interests of the hardware makers. While virtual reality has been gestating for decades, it is still very much a new medium. Every barrier to an enjoyable, safe experience puts it at risk of meeting the fate that befell 3-D TV: consumer apathy.

Noah Nelson is a reporter for Turnstyle News, a tech and digital culture site from Youth Radio.