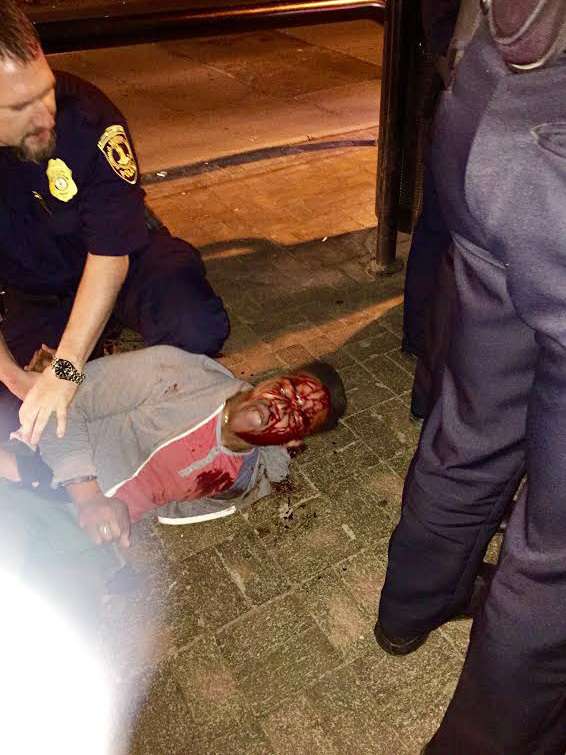 Martese Johnson is held down by an officer Wednesday in Charlottesville, Va., in this photo provided by Bryan Beaubrun.
Image credit: Bryan Beaubrun

Responding to an incident that has sparked street protests in Charlottesville, Virginia’s Gov. Terry McAuliffe has ordered a state investigation into the arrest of a black University of Virginia student. Martese Johnson, 20, was left with blood streaming down his face after being arrested by Alcoholic Beverage Control agents.

The case created an uproar after photos emerged showing Johnson, a member of UVA’s Honor Committee, lying on the sidewalk with uniformed ABC agents crouching over him. Portions of the concrete, as well as Johnson’s head and shirt, are bloody.

Johnson was arrested after midnight on March 18 near an Irish-themed bar on the Corner, an area along the campus that holds many bars and restaurants. He was charged with public swearing or intoxication and obstruction of justice. The ABC says that its agents approached Johnson “after he was refused entry to a licensed establishment,” and that they then decided to detain him.

“In the course of an arrest being made, the arrested individual sustained injuries,” the agency says. Court records show that Johnson is with “obstruction of justice without force.”

The incident comes nearly two years after Virginia’s ABC agency was criticized for another high-profile in Charlottesville, in which plainclothes agents arrested a UVA student who had bought a case of bottled water. The young woman at the center of that case spent a night in jail and briefly faced felony charges. She later filed a multimillion-dollar lawsuit (which was settled last year).

Those injuries resulted in 10 stitches for Johnson, who can be heard in a bystander’s video of his arrest using a profanity to call one of the officers a racist and asking as they pinned him to the ground, “How did this happen?”

In arrest records, an ABC agent says Johnson “was very agitated and belligerent but [has] no previous criminal history,” according to student paper The Cavalier Daily.

Johnson spoke at a large rally last night that was organized by a student organization called the Black Dot.

“You all being here is the absolute reason why I still believe in a community of trust — even with a busted head,” he said, according to member station WVTF. “I know that we can be better. We just have to choose to.”

The rally was attended by key school officials including its president, Teresa A. Sullivan. Yesterday, Sullivan said that she had asked McAuliffe to order an independent investigation into Johnson’s arrest.

“The safety and security of our students will always be my primary concern, and every member of our community should feel safe from the threat of bodily harm and other forms of violence,” Sullivan said in a letter to students and employees. “Today, as U.Va. students, faculty, and staff who share a set of deeply held values, we stand unified in our commitment to seeking the truth about this incident.”

Protesters blocked part of University Avenue in Charlottesville last night, holding signs that echoed words they chanted: “Shut It Down.”

Anger over the case has sparked a Twitter hashtag, #JusticeForMartese, that is being used to highlight the issue — and to counter the notion of Johnson as a troublemaker. In one photo that’s been widely posted, the third-year student is seen wearing a bow tie, smiling as he poses alongside Sullivan.