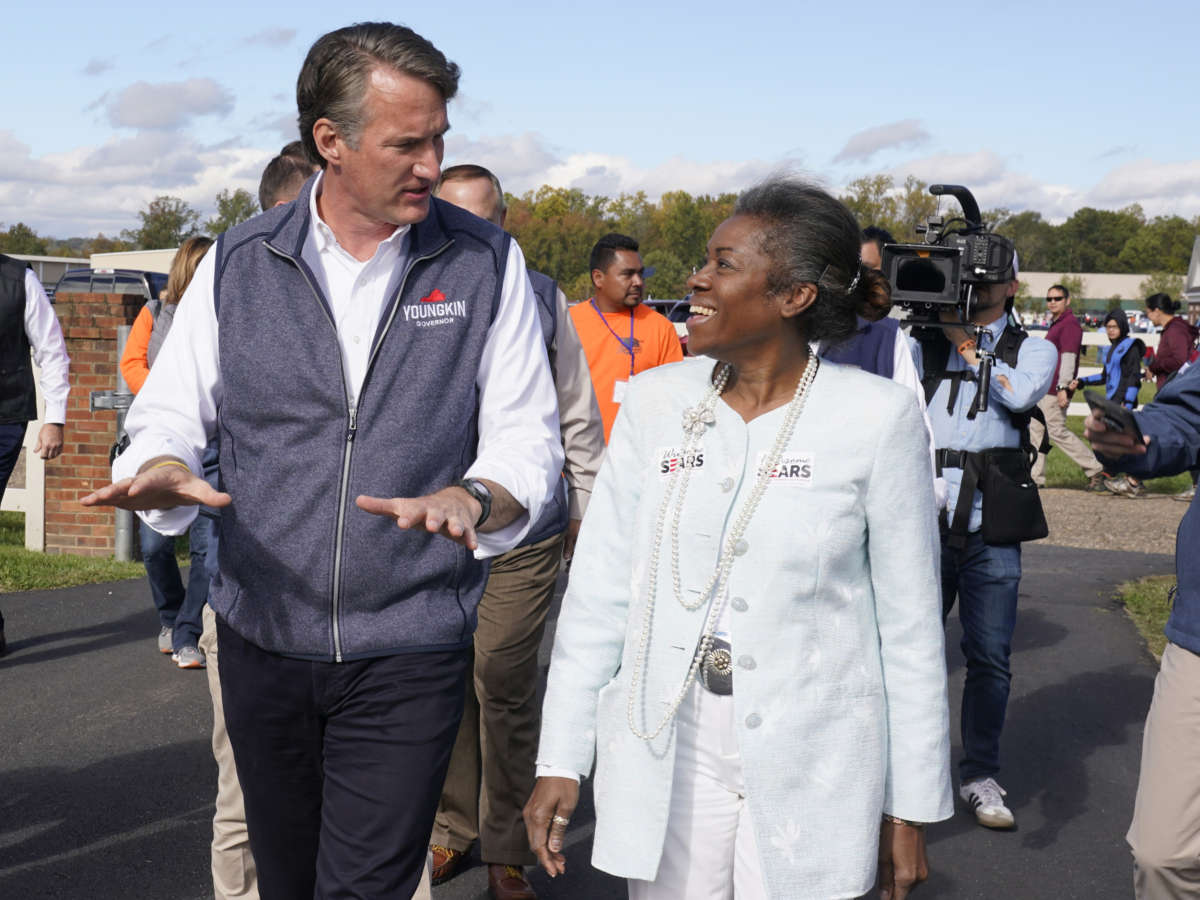 Virginia's Gov.-elect Glenn Youngkin, pictured on the campaign trail, speaks with now Lt. Gov.-elect Winsome Sears after a rally in Fredericksburg, Va., Oct. 30, 2021. Youngkin and Sears, both Republicans, won election on Nov. 2, and will be sworn into office Jan. 15, 2022.
Image credit: Steve Helber

On Saturday, Republican Winsome Sears will make history in Virginia by becoming the first Black woman to hold statewide office when she is sworn in as lieutenant governor alongside the governor-elect, Republican Glenn Youngkin.

Sears will preside over the state Senate and cast tie-breaking votes that could prove decisive on her political priorities, including restricting abortion and adding new charter schools. The Jamaican-born Republican frames her success as proof that the U.S. is progressing when it comes to race.

“I’m from another country, another culture,” Sears says. “But here I am. I see racism as one more hurdle in life.”

The 57-year-old doesn’t fit easily into a box. In her campaign literature, Sears is a gun-toting Marine Corps veteran who will banish Critical Race Theory from Virginia’s schools. Sears is also a philanthropist, a former director of a homeless shelter and a volunteer for a prison ministry. And she is a comeback story – someone who overcame a traumatic childhood, political setbacks and family tragedy to come within one heartbeat of the governor’s mansion.

Sears plans to use her new power to address what she sees as pressing problems: a country that under-educates its children and over-taxes its citizens, as well as a state unwilling to move on from its dark past.

“Slavery happened, absolutely,” Sears says. “And there are some vestiges of it. But how long are we going to go back there?”

It’s an uncommon message for Black politicians in Richmond, the former capital of the Confederacy. Virginia has been shaped by centuries of racial trauma, from slavery to redlining. Democrats have been talking more about the lingering impact of those scars since racial justice protests rocked the country in 2020.

For supporters like Bishop E.W. Jackson, a former GOP candidate for lieutenant governor who is also Black, Sears embodies a firey Republican response to a racial reckoning that’s gone too far – a response to the idea that the U.S. remains rooted in white supremacy.

“The people who traffic in that, and benefit from that, hate Winsome Sears because she’s the antithesis of that and proves the thesis that America is a place of decency and fairness,” Jackson says.

In her campaign, Sears ran as a pro-Trump underdog who lit up crowds with her speeches. Off-stage, she remained deeply religious, listening to worship music as she crisscrossed the state. Her name recognition – dimmed after two decades out of office – was propelled by the iconic photo of her holding her military-style rifle, taken at a gun range while on the trail.

Sears has spent the last two months training for her new role, watching footage of the state’s current lieutenant governor, Democrat Justin Fairfax. Democrats hold a 21-19 advantage in the state Senate, meaning Sears, like Fairfax, could break ties when a Democrat breaks ranks.

The soon-to-be lieutenant governor’s critics note she came to power on a ticket fueled by racial themes. Taking a cue from former President Donald Trump, Sears and Gov.-elect Glenn Youngkin claimed that equity programs in schools – designed to address systemic racism – were pitting students against each other and painting an overly pessimistic portrait of U.S. history.

Ravi Perry, chair of Howard University’s political science department, says Youngkin and Sears’ rhetoric misrepresented the reality of Virginia classrooms, where he says the history of slavery is still undertaught.

“It gave them a chance to harp on an issue that really does not exist,” Perry says. “The rhetoric is not only divisive and tiring and exhausting, it’s also inaccurate.”

That’s not the only Trumpian talking point that Sears repeated on the campaign trail. “I guess dead people voted,” she told members of the Fairfax GOP in February, winking at false claims of widespread election fraud. “We Republicans have never been able to get our dead folks to vote.”

Sears says she grew up around newspapers and dinner-table political chatter in Jamaica. At the age of 6, Sears moved to New York to follow after her father. Everything was unfamiliar – the smells, the cold, the deadbolts on her apartment door in the Bronx. Her family wasn’t wealthy; she says her father arrived in the U.S. in 1963 with only $1.75 in his pocket.

“When I stepped off that plane at JFK, it was very traumatic because I stepped into a new world,” Sears says.

But she thrived in her new home. Sears graduated high school early, joined the Marine Corps, got a master’s degree, raised three children, served in Virginia’s legislature and on the state Board of Education, and started her own business.

In 2001, she became the first Black Republican elected to Virginia’s General Assembly since Reconstruction. She pulled off the win in a heavily Black and Democratic district in Hampton Roads against a longtime incumbent who was ensnared in scandal.

Sears’ win shocked the political establishment. Backers like Republican state Sen. John Cosgrove says Sears showed up in public housing developments where residents had long been ignored. As a lawmaker, he says Sears was an independent-minded conservative who got along with everyone.

“She was never one to back down from a position that she had taken and nobody expected her to,” Cosgrove says.

Sears’ legislative record doesn’t have the same blistering tone as her later campaign rhetoric. Many of the dozen or so bills she sponsored during her time in the legislature had bipartisan support, including a successful push to reform the state’s medical board. She was one of two Republicans to vote against a GOP effort to raise taxes. When Sears announced her resignation after a single term, the editorial board of the Virginian-Pilot lamented the “loss of moderating voices” in the chamber.

Sears’ next move – an unsuccessful 2004 campaign for the U.S. House of Representatives – tested that label. According to the Daily Press, Sears ran a TV ad claiming that her opponent, Democratic Rep. Bobby Scott, had voted against legislation that would make child pornography a crime. Scott noted that it was already a crime and said Sears was misconstruing his record. Sears also claimed Scott had “forced” Virginians to accept same-sex marriage because of his vote against a constitutional amendment that would ban the practice.

After her loss, Sears published a book, Stop Being a Christian Wimp, and opened a home appliance business. In 2011, she was appointed to the state Board of Education where she served as vice president. Sears defended the board’s efforts to create different testing benchmarks in reading and math for students of different races, with lower standards for Black and Latino students compared to white ones. “We’re starting with Black children where they are,” Sears told NPR at the time.

Then, in 2012, Sears suffered a family tragedy. One of her daughters, as well as two grandchildren, were killed in a car accident. When she got the proverbial knock on the door, Sears says a Bible verse came to mind: “It was ‘The Lord giveth and the Lord taketh away, blessed be the name of the Lord,’ ” Sears recalls. “And then I collapsed.”

Sears re-emerged on the political scene in 2018 when she staged a write-in campaign against Republican Corey Stewart, a U.S. Senate candidate who openly associated with white nationalists. In 2020, she chaired a group backing then-President Donald Trump called “Black Americans to Re-elect the President.” When Sears considered a run for lieutenant governor, she called up Andrew Leppert, a Republican campaign operative who was working on Trump’s unsuccessful attempts to challenge the results of the vote in Wisconsin. Leppert says he liked her odds.

“If you assess where Republicans and how Republicans were successful in 2020, it was veterans, minorities, or females, and Winsome Sears is all three of those things,” says Leppert, who went on to become an early campaign manager.

It was a message Sears repeatedly made herself in the GOP nominating fight. Republicans hadn’t won a statewide election in Virginia since 2009 and Sears offered a fresh face without compromising on conservative credentials.

Leppert took the now-famous photo of the lieutenant governor-elect holding her gun and peppered voting sites across Virginia with yard signs featuring the picture. “If you’ve seen one of those signs in person, one of them looks like three, and six looks like 15,” Leppert says.

Sears’ campaign ran into headwinds during the general election. The Hill reported that she said she would back hardline Texas-style abortion restrictions in Virginia, sparking an immediate outcry. Days later, she fired her campaign staff.

The problems didn’t appear to affect Sears’ performance at the ballot box, where she won a slightly higher percentage of votes than either Youngkin or Attorney General-elect Jason Miyares.

“How dare you tell me that?” Sears says.

But Lamont Bagby, a Democrat who chairs Virginia’s Legislative Black Caucus, says it’s still not clear what Sears’ policies are or how they will help Black voters.

“Black folks aren’t just voting for Democrats because they like the color blue. It’s based upon the issues,” he says.

Sears has been quiet on one key issue – she won’t say whether she’s vaccinated against COVID-19. But she says her main focus in office will be education by trying to add school vouchers and create charter schools. For Sears, education is the backbone of her optimism about the country’s future.

“America is progressing,” she says. “I’m proof.” Sears has four years to make that case to Virginia voters.