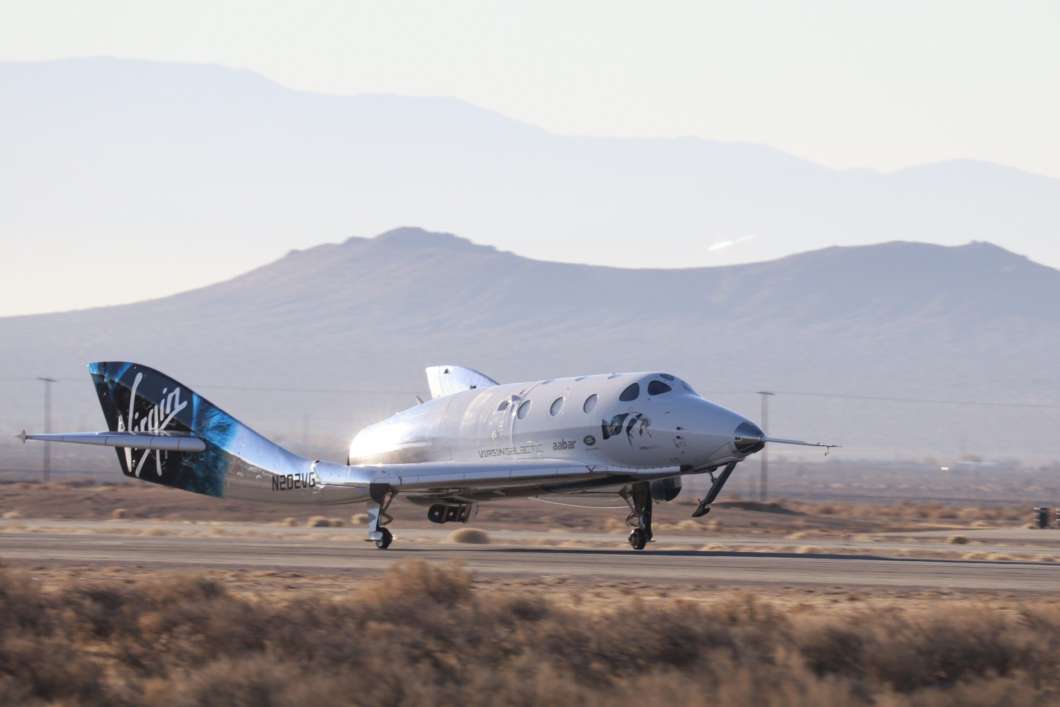 Virgin Galactic's SpaceShipTwo lands after a successfull test-flight December 13, 2018 which took the spacecraft and two pilots to the edge of space. Photo: Virgin Galactic.

Two test pilots flew Virgin Galactic’s SpaceShipTwo to the edge of space. A UCF-backed experiment was also on board the test-flight from the Mojave space port in California.

The test flight Thursday gets Virgin Galactic one step closer to taking tourists to space. To simulate the weight of an actual commercial mission, NASA provided SpaceShipTwo with four science experiments.

One of those experiments comes from UCF. The tissue-box sized experiment examines how particles behave in microgravity. “It’s always exciting when you have something about to go up on a rocket,” said Joshua Colwell, a UCF physics professor whose research was aboard the flight.

The experiential called COLLIDE will examine how particles interact with each other in microgravity. Researchers will use the data from the experiment to better understand how the planets of our solar system formed.

Using a tiny micro-computer and camera, the experiment drops a ball into tiny particles and records what happens using a high-speed video camera. Colwell and his team can then review the data and try to model how these particles interact with each other.

“This is the kind of experiment you can’t really do on the ground,” said Colwell. “So, it’s always exciting and a privilege to collect data like this from a high-quality free fall environment like you get from one of these suborbital vehicles.”

Other private companies like Blue Origin and SpaceX also launch scientific payloads into space. As the commercial launch industry ramps up, researchers will have more opportunities to get their experiments into space.

“It’s definitely becoming more of a viable option for not just our lab, but for other researchers to start making these experiment that require this microgravity platform as it’s becoming more commercialized,” said UCF Graduate Researcher Stephanie Jarmak.

The rocket plane reached an altitude of more than 50 miles during the launch, crossing the NASA-defined boundary of space.

Jarmak prepared the experiment for it’s mission in California and watched with onlookers as the space plane took its historic flight.

“It was just incredible to just watch this rocket go up and up and have the announcer counting the height that was reaching until it finally got past 80 kilometers – that’s where most people would define as the edge of space,” she said.

The research was funded by NASA, UCF and Space Florida.