Violins Of Hope Give Voice To The Voiceless 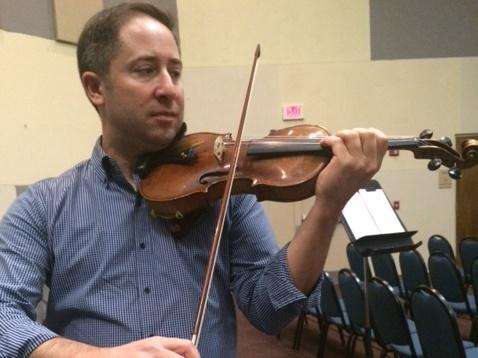 Daniel Jordan, concertmaster of the Sarasota Orchestra, with the Auschwitz violin/Photo: Robin Sussingham

There is a violin shop in Tel Aviv, whose owner has spent the past two decades repairing violins that belonged to Jewish musicians during the holocaust. He calls them the “Violins of Hope.”

He has restored dozens of the instruments, and has brought them to Sarasota where they’ll be played by members of the Sarasota orchestra and others in concerts and at schools around the area.

Each violin is an individual. Each instrument has its own voice and each tells its own story. Just as the people who played them and cherished them.
Daniel Jordan is the concert master of the Sarasota Orchestra. He’s playing a violin that belonged to an inmate of the Auschwitz concentration camp.
The man played in an orchestra at the camp. Their job was to provide music as Jews were unloaded from the cattle cars, or as they were led to the gas chambers. The music calmed the prisoners, distracting them from the reality of their situation.

Amnon Weinstein is the master violin maker that has made it his calling to give new life to these violins of the holocaust.

He says the violin was central to the eastern European Jewish way of life that was destroyed during World War II, and it was common for Jewish children to play the instrument. Weinstein’s parents emigrated from Poland to Israel in 1938, which is where his father opened a violin shop. He remembers holocaust survivors coming to his father’s shop and relinquishing their violins.

“The families never knew that the man or the woman had played in the orchestras. Because they didn’t want to talk about it,” said Weinstein. “Very few players continued to play after the holocaust. Because what they have seen, it’s impossible.”

Weinstein has taken his violins to Cleveland, to Charlotte North Carolina, and most recently to Jacksonville.

Jordan and fellow members of the Sarasota Orchestra are rehearsing for a concert they’ll be giving the following night. All of the violinists are playing with restored instruments from the Violins of Hope project including famed Israeli violinist Shlomo Mintz.

After the gala concert, the musicians will take the violins out into the community for outreach programs and to several schools. Weinstein’s son, Avshalom Weinstein, says education is at the heart of the Violins of Hope project.

Weinstein began the project in 1996 with just a few violins. As word has spread, more and more people are coming forward with instruments and the stories that accompany them. There are now more than 60 “violins of hope.”