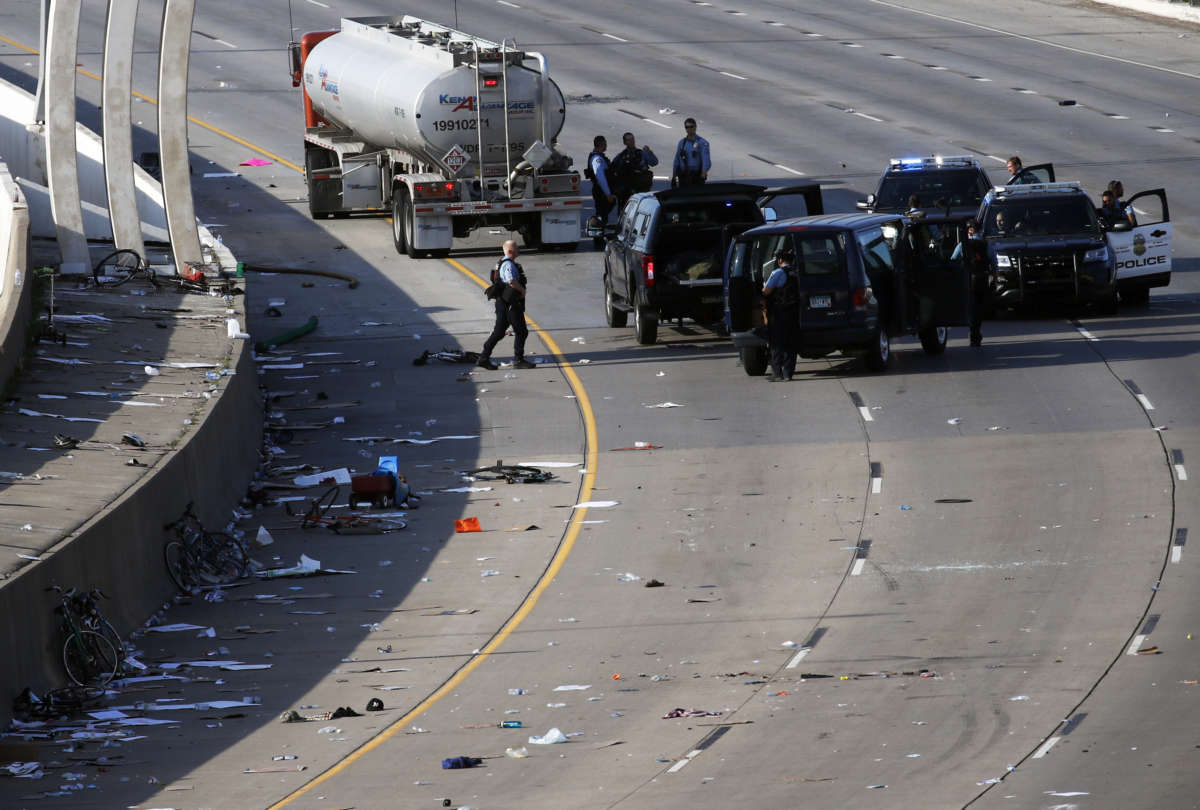 Police clear the area where a tanker truck rushed to a stop among protesters on an interstate highway on Sunday in Minneapolis.
Image credit: John Minchillo

Across the country on Sunday, protesters staged large-scale demonstrations prompted by the death of George Floyd in Minneapolis and, more broadly, anger at police brutality. Some cities, including Minneapolis, Atlanta and Seattle, saw clashes with police, buildings and cars set afire and looting.

By evening, many demonstrations had devolved into another night of violence with protesters ignoring curfews imposed in dozens of cities.

Floyd, a 46-year-old black man, died in police custody on Monday. Video shows a Minneapolis police officer with his knee on Floyd’s neck shortly before his death.

In Minneapolis, a semitractor-trailer plowed through a crowd of protesters marching on an interstate highway near downtown which had been closed to traffic.

Authorities say no one was injured when the truck drove into the crowd at a high speed on westbound Interstate Highway 35.

According to the Minnesota Department of Public Safety, the driver may have been unaware of the highway closure. “It appears the semi was on I-35W as authorities were closing the road. It didn’t appear to drive through any barricades,” the department tweeted.

State Public Safety Commissioner John Harrington says authorities had shut down the freeway so protesters, who numbered from 4,000 to 5,000, could safely demonstrate. Before the incident, the protest appeared peaceful.

Protesters, many of whom jumped on top of the truck, managed to stop the vehicle. Some dragged the driver out of the front seat and started beating him. The driver, identified by police as Bogdan Vechirko of Otsego, Minn., is being held on probable cause for assault. He was taken to a hospital and is being treated for his injuries.

“He was driving a gas tanker,” said Rhys Gailah, 39, who was in the middle of a sit-in listening to speakers when the truck came barreling through. “He came driving at least 50 miles per hour through the crowd. Everyone was sitting. It was peaceful.”

Tensions flare in the Nation’s Capital

Protests continued in Washington, D.C., with marches from a historically black university to a park just across from the White House.

The peaceful marchers had a city police escort as they walked the nearly two miles from Howard University to Lafayette Square.

Protesters chanted about the death of Floyd, and other African Americans who have died following police violence.

“Even in the middle of a pandemic, cops are killing us,” read one sign carried by protester Elizabeth Betts.

“It’s crazy how even in the middle of a pandemic, black people have to protest like this,” Betts said while marching. “We are at a point where it’s the same story, the same things are happening. I’m tired of this.”

The demonstration in Lafayette Park turned violent by evening, as protesters threw bottles at police, set fires to cars and to the basement of St. John’s Church. The historic church has been attended by every president since James Madison.

Police pushed the crowds away from the White House with bursts of tear gas.

This is a breaking news story. This post will be updated.