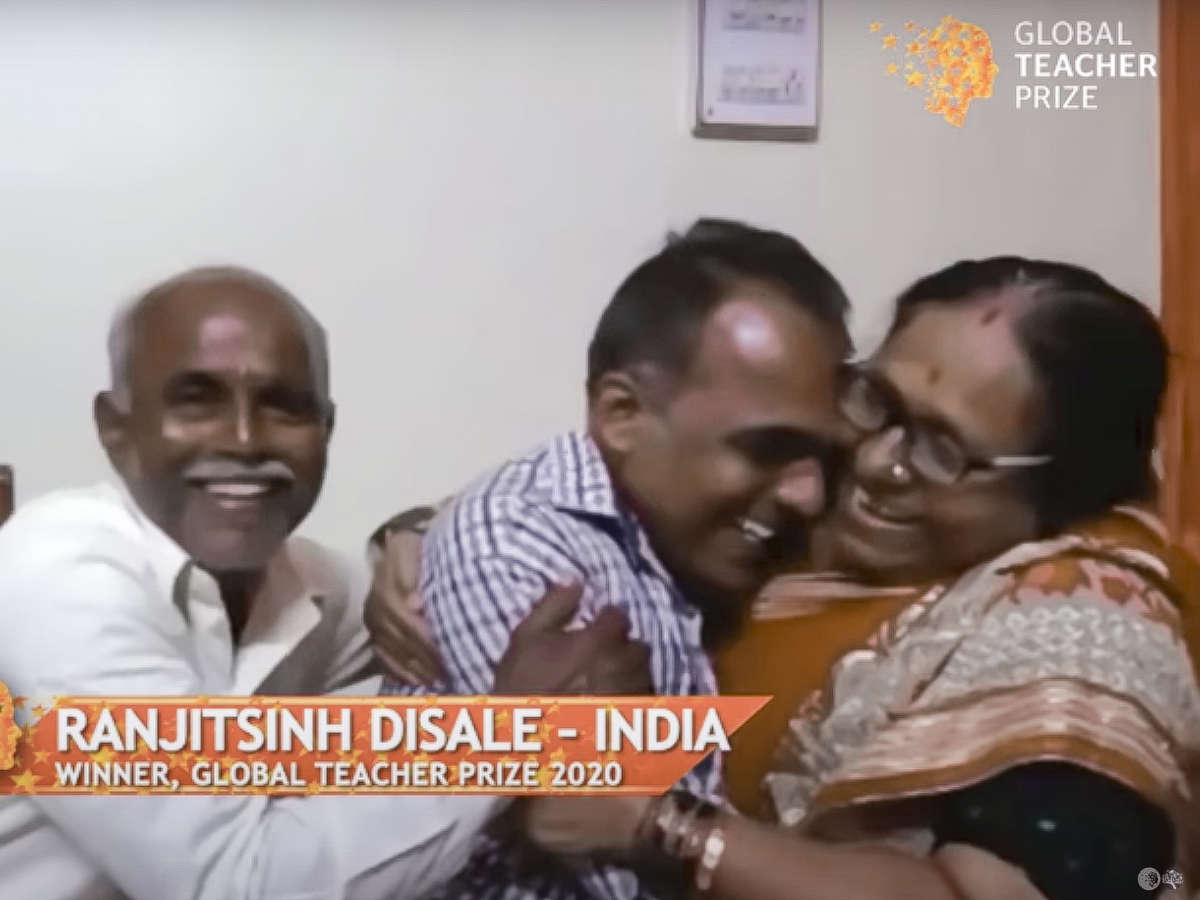 The moment British actor and comedian Stephen Fry announced Ranjitsinh Disale as the winner of the $1 million Global Teacher prize.

In 2010, Indian teacher Ranjitsinh Disale heard that one of his teenage female students was going to marry a man in his 30s.

“I directly went to the girl’s house and told her father, ‘You cannot do this,’ ” says Disale, 32, who currently teaches third- and fourth-graders at a government school in Paritewadi, a small village in western India.

When the father didn’t agree, Disale called the police because child marriage is illegal in India. Together they counseled the father. Finally, he called off the wedding.

It’s actions like this that helped earn Disale the title of the world’s most “exceptional teacher.”

In December, Disale won the $1 million Global Teacher Prize, an annual award sponsored by the Varkey Foundation, a U.K.-based nonprofit working to improve access to education for underprivileged children, and by UNESCO, the U.N. agency for education, science and culture. He was one of more than 12,000 teachers from over 140 countries nominated for the prize.

The organizations praise Disale for going above and beyond his job description. Over the years, he has learned a new language, invented ways to help students learn with technology and even endured attacks — all to ensure his students, especially girls, can keep learning.

“[Disale has] transformed the life chances of young girls,” the Varkey Foundation said in a statement. “The impact of [his] interventions has been extraordinary: There are now no teenage marriages in the village and 100% attendance by girls at the school.”

Disale was declared the winner at a virtual ceremony broadcast from London. When British actor and comedian Stephen Fry announced his name, Disale, at home in India, screamed in excitement and hugged his overjoyed parents seated on either side of him. Congratulatory messages poured in from politicians including former British Prime Minister Gordon Brown, Bollywood star Amitabh Bachchan and even the Dalai Lama.

His students rejoiced, too.

“They were dancing in celebration and they kept saying, ‘Sir, we are proud of you,’ ” says Disale. “That’s the biggest moment for a teacher, I can’t express that feeling in words.”

Disale hadn’t always planned to be a teacher. He was studying to be an engineer but dropped out because of bullying by his peers. He enrolled in a teacher training course on his father’s suggestion and was posted to Paritewadi in 2009 for his first assignment.

His classroom was overrun by cows and buffaloes. A farmer had turned it into a cattle shed and refused to leave.

“I had to register a police complaint,” says Disale. “[The farmer] would shout at me and throw stones at my bike.”

Even bigger challenges lay ahead.

Most of Disale’s students come from low-income families who depend on farming. Many belong to tribal communities where early marriage is common.

“They feel that girls are just made for [marrying],” says Disale.

Disale also says many parents thought school was a waste of money for their kids because they see even educated people struggling to get jobs.

“They felt the better option is to take the children to the farm [to work] so that they get some experience,” says Disale.

So Disale set out to change their mindset. When his students didn’t show up to class, Disale says he would go to the fields to persuade their parents. He learned their native language Kannada to gain their trust and translated the curriculum from Marathi, a language some students did not speak, into Kannada.

To further boost student attendance, around 2010, he introduced technology in the classroom.

He bought a new laptop with money from his dad and would show movies and play songs for his young students. “When they went back home, they would start talking about it with their friends who would then get interested in coming to school,” says Disale.

Once he had his students’ attention, he would play educational videos and songs that covered topics in their curriculum.

But some parents were still not sending their kids, particularly girls, to school, he says.

So Disale came up with a way to get the school curriculum to the girls.

He started making digital versions of his lesson plans. He created PowerPoint presentations, translated educational videos from YouTube and made videos of his classroom lectures. He called parents with female students at home to drop by the school on the weekends so he could transfer the digital files from his laptop to their mobile devices. His elementary school students, many of whom are mobile savvy, could then use their parents’ devices to keep up with what Disale was teaching in class — and Internet connectivity, he says, is good in the village.

There was one problem. The files were sometimes not supported by the mobile devices or would get corrupted during the transfer. So in 2014, Disale devised a workaround: He would make the videos, links, audio files and homework available to download over the Internet using QR codes, or quick response codes. He would print stickers with the QR codes and distribute them among his students.

The students were particularly interested in videos of Disale teaching lessons that they had trouble understanding, says Disale. It was used not just by kids at home, but also by kids coming to school, too. If they had a doubt or question about what they learned in class, they could revisit Disale’s recorded lectures.

“It was like a miracle,” says Disale, adding that the academic performance of his students, especially girls, improved drastically.

For this reason, he proposed the idea of QR-coded textbooks to the government in Maharashtra, the state where Paritewadi is located. And in 2017, the government announced it would introduce textbooks with QR codes in the entire state. The codes link to supplementary teaching materials, such as explanatory videos, for students who need a bit more help in grasping concepts in the book.

As for Disale, the QR codes in the textbooks proved to be a blessing when schools closed during the coronavirus lockdown. His students were able to continue doing their work from home on mobile phones and switch to virtual learning easily.

“The lockdown has taught us that we cannot rely on traditional ways of teaching,” says Disale. “Technology should be an integral part of teaching.”

What differentiates Disale from other teachers is that he did not depend on the system but paved his own way to fulfill his role as a teacher, says Francis Joseph, co-founder of an education nonprofit called School Leaders Network, who has known Disale for several years.

Government schoolteachers in India often lack motivation, says Joseph, because they get paid whether students learn or not. No one questions them. Teacher truancy is also common. According to a 2016 World Bank report, nearly 24% of teachers in some 1,300 Indian villages surveyed were absent during unannounced visits.

“You just need some champions [like Disale] to lead a revolution in increasing the motivation and interest among other teachers,” says Joseph.

Disale says he’s now working on a project to promote world peace by connecting tens of thousands of students from conflict zones around the world. The Let’s Cross the Borders project is a six-week program in which students are matched with a “peace buddy” from another country via Skype. Students interact with their buddies, prepare presentations and listen to guest speakers together to understand their similarities.

When he was named the winner, Disale announced that he would share half of his $1 million prize with the other nine finalists who come from different parts of the world including Italy, Vietnam, Brazil and Nigeria. He says he will use his share of the prize to build a network of like-minded teachers in India who are passionate about innovation in learning.

“I want to see many Ranjitsinh Disales from India,” he says.