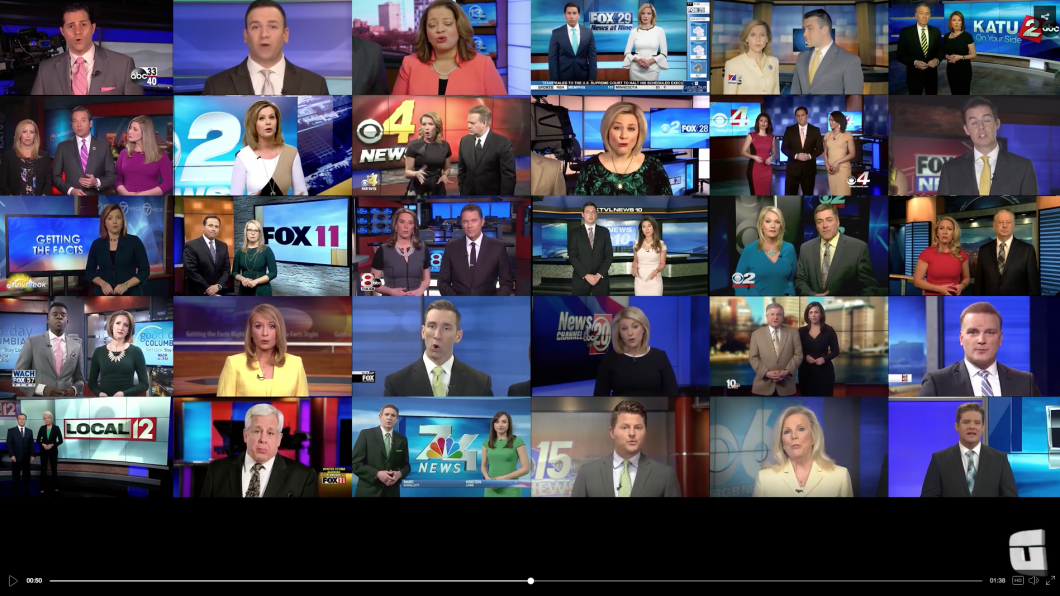 One company. One script. Many, many voices.

A video published by sports news site Deadspin over the weekend revealed dozens of TV anchors from Sinclair Broadcast Group reciting the same speech warning against “biased and false news.”

It was the latest show of the vast reach of a company that owns local TV stations across the country and has long been criticized for pushing conservative coverage and commentary onto local airwaves.

Sinclair required local anchors to record promos where they denounce “the troubling trend of irresponsible, one-sided news stories plaguing our country” and say that “some members of the media use their platforms to push their own personal bias and agenda to control ‘exactly what people think.'”

Sinclair says it is simply warning viewers about the dangers of fake news circulating on social media.

But media critics see a powerful company using local journalists to parrot one of President Trump’s most consistent talking points — an allegation that the mainstream media cannot be trusted.

Sinclair owns more than 190 TV stations across the country, more than any other media company, and is seeking to acquire dozens more by purchasing Tribune Media. The Federal Communications Commission has allowed the company to consolidate more power and centralize more news production.

Last spring, reporting on the company’s ambitions, NPR’s media correspondent David Folkenflik wrote, “If history is any guide … Sinclair Broadcast will also pull news coverage on those stations in a more conservative direction and explore giving full rein to those beliefs on a national platform.”

The broadcasting behemoth has a consistently conservative, pro-Trump bent, and has required local stations to run right-wing commentary segments, including segments by former Trump advisers. (Last summer, John Oliver lambasted that practice in a segment on his HBO show, Last Week Tonight.)

And Sinclair has previously denounced fake news stories in a segment, recorded by a news executive, that local stations were instructed to air last year.

But instructing local TV anchors to read a script like this in their own voices is a new development.

Deadspin’s video stops at a line that it repeats again and again, to drive home the video’s critical message: “This is extremely dangerous to a democracy.”

The viral video was released after multiple media outlets spent weeks reporting on Sinclair’s use of the scripts.

NPR’s Folkenflik spoke with Sinclair’s top news executive a week later. Scott Livingston told David that Sinclair’s “reporting is nonpartisan” — although the company has been frequently accused of favoring Republicans in news coverage. Livingston said that the news anchor script is “a warning about fake news circulating on social media.”

Jane Hall, a professor at American University and a former media critic for Fox News, said that the promo is clearly supporting President Trump’s condemnation of most news outlets.

“It’s naked in the sense that it’s forcing people in the news to read something that is a corporate piece of propaganda, in my opinion,” she told David.

Then, on Friday, the Seattle Post-Intelligencer published the script in its entirety.

But it’s one thing to see a script; another thing to see it recited in unison. On Friday, the liberal website ThinkProgress released a video showing some samples of local stations airing the segments. And on Saturday, Deadspin published the video that took the Internet by storm.

Sinclair, which is headquartered outside of Baltimore, told the Baltimore Sun the script is referencing fabricated stories like “Pope Endorses Trump” or conspiracy theories like “Pizzagate.”

“That’s the goal of these announcements: to reiterate our commitment to reporting facts in a pursuit of truth,” Livingston told the Sun. “We consider it our honor and privilege to deliver the news each night. We seek the truth and strive to be fair.”

As David has previously reported, Sinclair “takes a not only an ideological line but at times a partisan line. It’s been a very pro-Trump line.”

Trump has tweeted in support of the media group, calling other news networks “among the most dishonest groups of people I have ever dealt with” and saying “Sinclair is far superior to CNN and even more Fake NBC.”

It was a fairly typical Trump tweet — and exactly the kind of message that critics hear echoed in Sinclair’s mandatory anchor scripts.