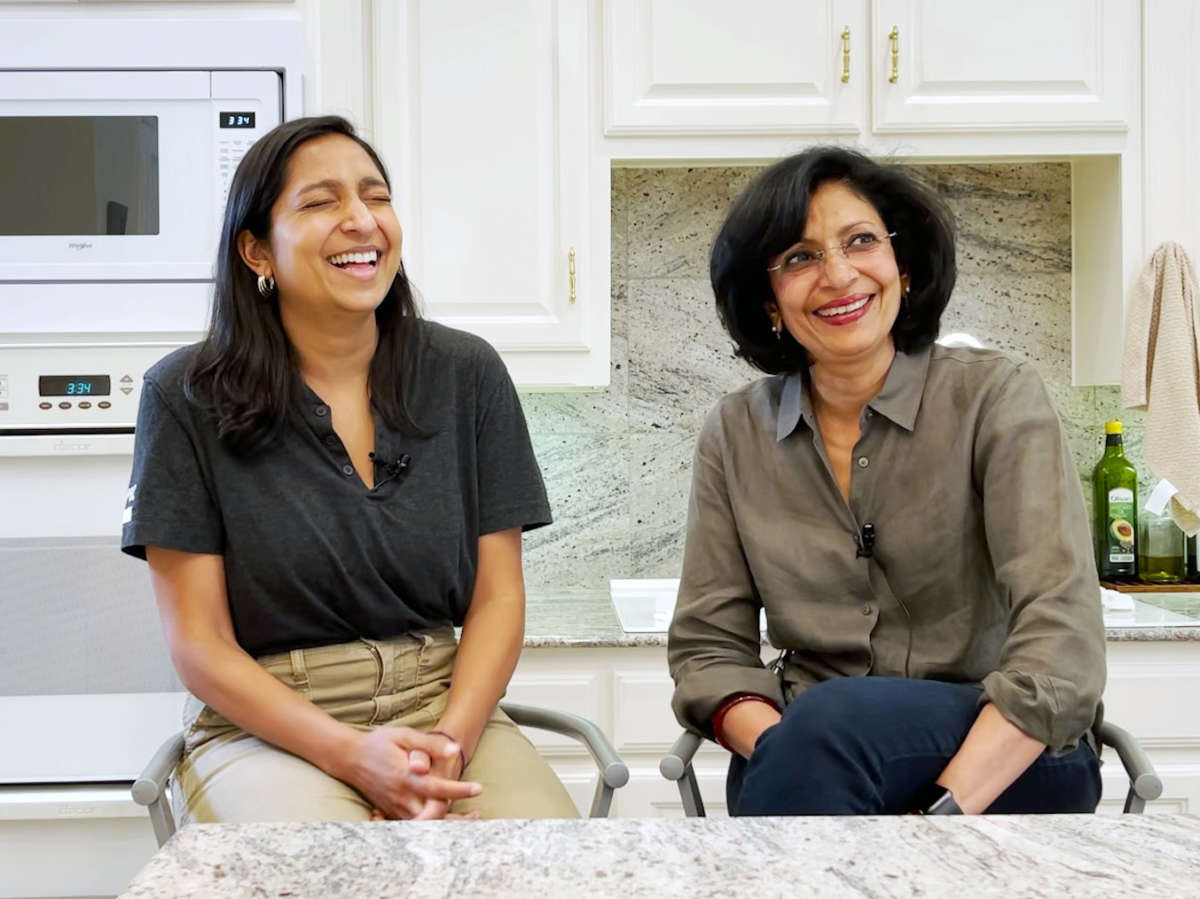 Priya Krishna and her mother, Ritu, in their kitchen.

When Ritu Krishna first arrived in the U.S., ingredients for her Indian recipes were hard to come by.

Over time, Ritu’s cooking started to evolve. The biggest influence was watching cooking programs on TV.

“I had really unknowingly embarked on an educational endeavor where watching TV was the way I was teaching myself. Julia Child was probably the most influential,” Ritu says.

She started to learn basic French cooking techniques and recipes, like corn timbale, even if the execution wasn’t always successful.

These influences and others eventually changed the way Ritu cooked for her family in the U.S., inspiring new Indian dishes with special twists, like roti pizza, dal burritos, or tomato rice with crispy cheddar. These are some of the dishes detailed in the cookbook Indian-Ish, which Ritu co-authored with her daughter, New York Times food reporter Priya Krishna.

Some of what Ritu was cooking were dishes that might be more appealing for her kids to eat, as they were growing up.

“On the one hand, you are being brought up as Indian kids. On the other hand, you are living in America … That, in some ways, is going to be not only different, but may at times clash even. So I wanted to do everything to make that easier for you,” Ritu says to Priya.

But Priya went on her own journey to appreciating her mom’s home cooking. She reflects on how she came to love her heritage food after a childhood of ambivalence — and sometimes even shame — toward it.

As a kid, Priya unknowingly compartmentalized her Indian and American identities in order to fit in — code-switching depending on whether she was at home or at school.

“So, of course, when I was in an Indian grocery store, I was an Indian kid who loved aloo tikki and bhel puri and all of these things,” Priya says. “But as soon as I landed at school or was at my friend’s house, I was very good at, sort of, presenting in a way that I felt would be acceptable to that audience that I was with.”

In conversation with each other, Priya and Ritu discuss the various influences on their cooking over the years and how food traditions brought them closer together. They also cook dal and a special baked beans family recipe in the Krishna home kitchen.

For a longer version of this conversation between Priya and Ritu, listen to their episode on It’s Been a Minute with Sam Sanders.

This story is part of the Where We Come From series, featuring stories from immigrant communities of color across generations. Find more stories here.

Video reporting, production, and editing by Michael Zamora. Anjuli Sastry created and produced ‘Where We Come From’ with additional editing and production by Julia Furlan and Diba Mohtasham. Additional video editing by Ben de la Cruz and Nicole Werbeck. Our director of programming is Yolanda Sangweni.