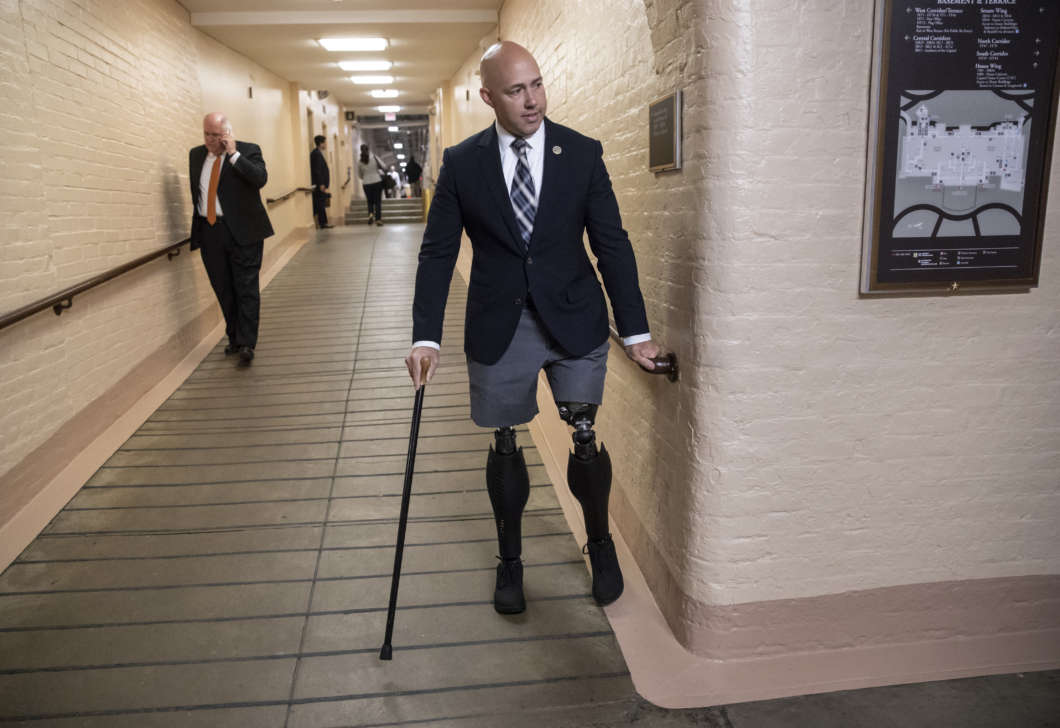 Rep. Brian Mast, R-Fla., walks to a meeting in the Capitol in Washington in June 2018. Mast and other members of Congress are appealing a decision by the Department of Veterans Affairs to evict them from office spaces at VA hospitals.
Image credit: J. Scott Applewhite

The secretary of veterans affairs has told several members of Congress that he’s evicting them from offices they’ve been using in VA hospitals. The House members use the offices to meet with vets and discuss everything from their eligibility for benefits to the quality of the care they receive.

The VA says it wants the spaces back for clinical uses, but one of the lawmakers, Rep. Brian Mast, R-Fla., thinks it’s personal. Mast’s district extends from Palm Beach North to Port St. Lucie, and like many of his constituents, he is a veteran. He lost both his legs working as a bomb disposal expert in Afghanistan.

“I get all my health care from the VA,” Mast says, “so I’m there regularly getting health care needs taken care of.”

Mast has been an activist on veterans’ issues in Congress since he was elected in 2016. Last year, he became the first congressman to open an office inside a VA facility, the VA Medical Center in West Palm Beach. Five other members of Congress, all Florida Democrats, followed suit.

Last month, they received a letter from the VA telling them that their time was up and they would have to move out by the end of the year. Mast urged the VA to reconsider.

On his Facebook page, he posted a video of a contentious hearing in April where he questioned VA Secretary Robert Wilkie over security issues and suicides at the West Palm Beach hospital. At the hearing, Mast pressed Wilkie on when he would visit.

“I will say as soon as possible,” Wilkie says in the video, but Mast interrupts.

“I was a bomb technician,” the congressman says. “We used to always use vague terms like that so people would never know exactly when we would get on the ground. I would like a more specific answer.”

Mast has linked the decision to evict him to that hearing.

Wilkie says the decision to evict members of Congress from offices in VA facilities has nothing to do with that hearing or congressional oversight of the agency. In a letter to Mast, Wilkie said the VA needs the offices for clinical space. Mast’s office, he says, will be used for a smoking cessation program. Appearing on Fox News recently, Wilkie said, “I want the space. I want it for our veterans. I’m not stopping the Congress from getting their oversight in. They have offices that are already paid for.”

Mast and his congressional colleagues want to stay. They’re co-sponsoring a bill requiring the VA to allow members of Congress to use its facilities to meet with constituents. At a news conference in Washington, Mast said it’s an easy way to improve veterans’ care.

“We provide veterans with more access to care, more services and more oversight without in any way negatively affecting anybody in spaces smaller than the size of the stage we’re sitting on,” he said.

The VA Medical Center in West Palm Beach is a sprawling complex spread over 1.7 million square feet. Inside, in addition to the pharmacy, chapel, clinics and other medical facilities, there’s a coffee shop, a food court and a retail store. And down one hallway is the windowless congressional office, which is about the size of a large broom closet.

Vietnam veteran Dennis Gelsomino says it’s a small space but important for people like him.

“Having that office in there is a conduit for veterans to go in and speak with a representative,” Gelsomino says. “[They] can voice their concerns and ask questions and then, in some cases, get a congressional inquiry on what’s going on with their case.”

After seeing what Mast had done in West Palm Beach, Rep. Stephanie Murphy, D-Fla., whose district is in central Florida, opened an office at the VA hospital in Orlando. Like Mast, she received an eviction notice from the VA and rejects the notion that it’s because the hospitals need more space.

“Let’s be clear,” Murphy says. “This decision came from Washington, not Orlando or West Palm Beach. Our partners in our local hospitals see the value that we offer. And so this isn’t an issue with them. This is a bureaucratic decision that’s coming from Washington.”

Murphy, Mast and other members of Congress hope Wilkie will reconsider his decision and allow them to keep their offices at the VA hospitals. In the meantime, they expect a hearing soon on a bill that would make that the law.