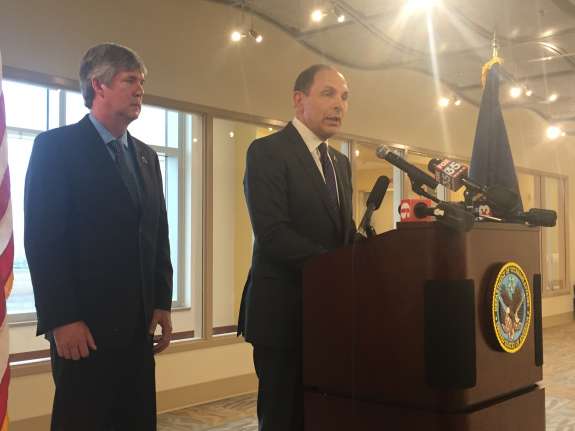 Veterans Affairs Secretary Robert McDonald visited Orlando Friday. He’s been in the job since July. The former CEO of Proctor and Gamble has made reforming VA bureaucracy his top goal.

That message has been drowned out lately as controversy surrounds comments he made to a homeless vet that he served in special forces – even though he didn’t.

He did speak with reporters today, including 90.7’s healthcare reporter Abe Aboraya. He spoke with 90.7’s Crystal Chavez about the visit.

CRYSTAL CHAVEZ: Now let’s start addressing the controversy surrounding McDonald: a video has surfaced of him telling a homeless veteran that he had served in special forces when he had only trained as an Army ranger. What did McDonald say today?

ABE ABORAYA: Yes, this has been likened to a Brian Williams-esque incident. McDonald was speaking with a homeless veteran and talked with him about being in the special forces. McDonald graduated from West Point and did complete training as an Army Ranger, but he never served as a Ranger. McDonald apologized, and talked about the need to rebuild trust with the veteran community. That trust, he said, is crucial to having a good customer service relationship with veterans.

CRYSTAL CHAVEZ: Now last in May, an audit found that senior managers in the VA were manipulating wait time records, and that dozens of veterans had died while waiting for care. Did that come up at Friday’s news conference?

ABE ABORAYA: It did. Now it’s worth noting that locally, 94 percent of veterans are able to get an appointment within 30 days. But that remaining 6 percent is still about 6,700 veterans who are waiting. And I’m told that often times, these veterans are waiting for specialty services that can be harder to access. That percentage hasn’t declined in any significant way since October. McDonald said he wasn’t able to talk about local numbers, but he did say that nationally, the wait times are down, but more work needs to be done. But this new VA hospital in Orlando will go a long way towards combating those wait times.

CRYSTAL CHAVEZ:I understand Timothy Liezert he local head of the VA, was also there. What did he say about wait times?

ABE ABORAYA: Liezert pointed out that while the wait times haven’t dropped locally, the amount of vets they see has increased. So while he wants to see the number dropped, he’s glad it isn’t increasing while waiting for the new hospital to open.

CRYSTAL CHAVEZ: The VA Secretary was here to tour the new VA Hospital. What’s the latest there?

ABE ABORAYA: We’re here on the 65-acre VA site. For a bit of scale, that’s more than twice the size of Wet ‘N Wild in Orlando. Construction of the massive new hospital is basically done, and some patients started being seen for primary care at this facility this week. But it’s still going to be into the summer before the clinic and the hospital are fully operational. Officials are starting with the clinic side, and then the emergency room and inpatient hospital will open last. Those are new to the area.

CRYSTAL CHAVEZ: And that facility is years behind schedule and millions of dollars overbudget.

ABE ABORAYA: Absolutely. It’s been years of fighting between the contractor and the VA. The contractor blames faulty designs and a convoluted system of getting those design changes fixed as the primary reason for the delays. The VA blames a lack of workers for the delays. In the end, a civil lawsuit is still ongoing as to who will pay for those cost overruns: The VA and taxpayers or the builder. McDonald today said the VA is reforming that construction system so the kinds of delays veterans have seen here and elsewhere nationally won’t be repeated. But McDonald stressed the need for new facilities, saying most VA facilities are more than 50 years old, and with changing demographics – especially the number of women serving in the military – more construction will be needed.

CRYSTAL CHAVEZ: Abe Aboraya, what have you heard from veterans now that it’s starting to open?

ABE ABORAYA: Veterans we’ve spoken to are very excited about the level of services and the quality of care they expect from this hospital and clinic. It’s about the size of the Mall at Millenia. And this facility will not only be a place to get care, it’s also a monument to service. I’ve been inside the hospital while construction was ongoing, and the scale of the facility really is staggering.

CRYSTAL CHAVEZ: And that’s not the only construction going on at the new VA. Did VA Secretary McDonald also get a look at the new SimLEARN center?

ABE ABORAYA: You could actually see the multi-million dollar simulation center coming out of the ground from where the press conference was held. Orlando has been a simulation and training hub for decades, and VA officials are tapping into that know-how and workforce to create this new center. It will serve as a hub to train doctors and nurses and VA officials, kind of a train-the-trainers system. McDonald said that should be open by the end of this year, and these kinds of partnerships will amplify the VA’s ability to reach veterans.