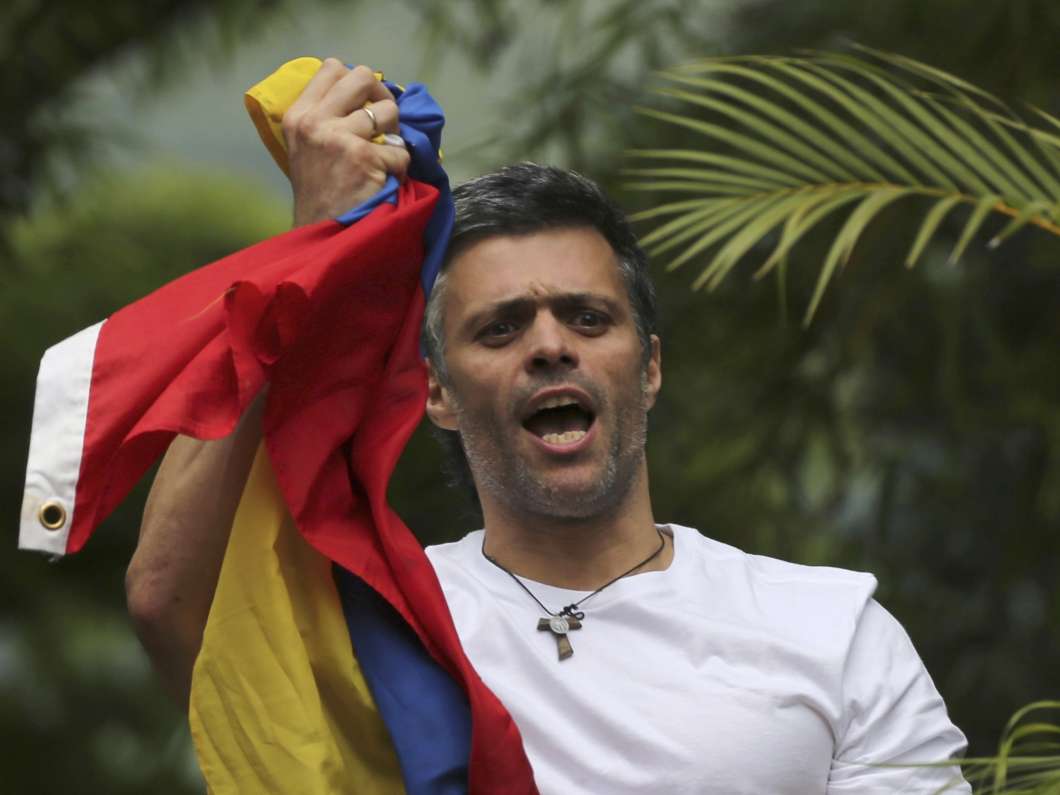 In a photo taken lasy month, Venezuela's opposition leader Leopoldo Lopez holds a national flag as he greets supporters outside his home in Caracas, Venezuela, following his release from prison and being placed under house arrest after more than three years in military lockup.
Image credit: Fernando Llano

Venezuelan security agents arrested two key opposition leaders in a midnight raid on their homes, making good on President Nicolas Maduro’s promise to crack down on dissent following a vote that gave him broad authoritarian powers.

In the middle of the night, armed men took Leopoldo Lopez and Caracas Mayor Antonio Ledezma from their respective homes in the capital. The leaders had been highly critical of Maduro and had only recently been released from jail on politically motivated charges. The two, however, remained under house arrest.

The wife of Leopoldo posted a video on Twitter showing flak-jacketed agents bundling her husband into a vehicle marked “Sebin” — the name of Venezuela’s intelligence agency — and then speeding off.

“They’ve just taken Leopoldo from the house,” Lilian Tintori wrote in one tweet. “We don’t know where he is or where they’re taking him.”

Leopoldo and Ledezma had denounced Sunday’s vote to change the constitution and grant Maduro new powers, labeling the poll undemocratic. The vote authorized the creation of a Constituent Assembly.

As NPR’s Philip Reeves reported on Monday, the vote, which went in Maduro’s favor after an opposition boycott, ensures the president will have a free hand in the country’s affairs. “The way that the election was set up ensured that this would be a body that is packed with supporters of Maduro and the ruling Socialist Party,” NPR’s Philip Reeves explained on Morning Edition.

On Monday, the Trump administration imposed sanctions on Maduro himself, marking only the fourth time that the U.S. has sanctioned the sitting leader of another country. In announcing the sanctions, National Security Advisor H.R. McMaster referred to the “outrageous seizure of absolute power through the sham election of the national constituent assembly” and said of Maduro that he is “not just a bad leader. He is now a dictator.”