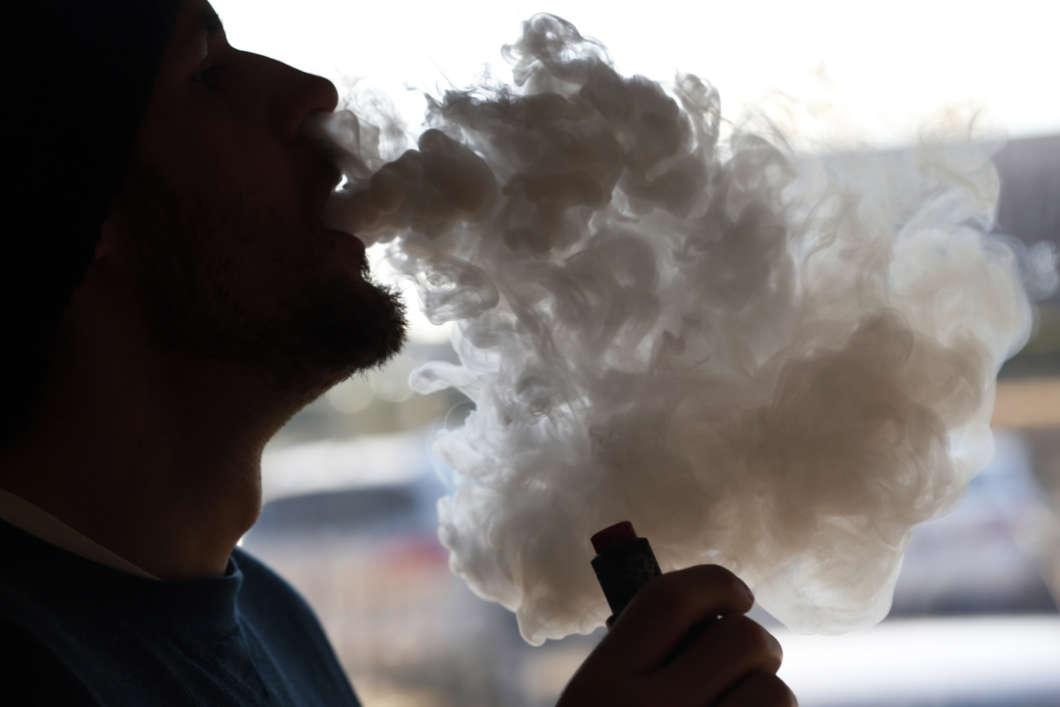 Using e-cigarettes doesn't seem to be as risky as smoking tobacco. But both activities can cause long-term lung problems, research finds — and the effect seems to be additive for people who do both.
Image credit: Steve Helber

The extreme cases of lung injury caused by vaping have raised awareness of the potential harms of electronic cigarettes.

Since the Centers for Disease Control and Prevention began tracking the problem last March, there have been 52 confirmed deaths and about 2,400 hospitalizations.

Many of these acute illnesses are linked to black market THC products, but a growing body of evidence points to the risks associated with vaping nicotine.

For starters, there’s evidence that teens who use e-cigarettes are more likely to have increased coughing, wheezing and other short-term effects such as asthma flares.

“Vaping can do a lot to the lungs,” says Robert Tarran, a professor at the University of North Carolina’s School of Medicine in Chapel Hill. Now there’s evidence that people who use e-cigarettes have an increased risk of developing chronic lung disease, including conditions such as COPD, chronic bronchitis, emphysema or asthma.

“I think it’s fair to say that the new study adds to the evidence saying vaping e-cigarettes is harmful to the lungs,” Tarran says.

The findings come from a study published in the American Journal of Preventive Medicine. Researchers tracked new lung disease among people who smoke and vape.

“We started out with people who didn’t have any diagnosis of respiratory disease,” explains researcher Stanton Glantz, a professor of medicine at the University of California, San Francisco. Then they followed the participants for three years.

During that time, the risk of developing lung disease among people who used combustible products, such as cigarettes, more than doubled.

In addition, the researchers documented what seems to be an independent effect of vaping. They found that people who used only e-cigarettes had about a 30% increased risk of developing lung disease, compared with people who didn’t use any nicotine products.

The risks appeared to be highest among adults who both vape and smoke, which is often the pattern of use among people who begin using e-cigarettes in an attempt to quit smoking but don’t manage to completely give up cigarettes.

“If you’re a dual user — using cigarettes and e-cigarettes at the same time — which is the dominant use pattern among adult e-cigarette users, these two risks multiply,” Glantz says.

Given that the respiratory system’s main job is to move fresh air into your body — while removing gases — perhaps it’s not a surprise that the lungs respond poorly to the host of potentially harmful compounds found in e-cigarettes, researchers say. And prior studies point to multiple ways that vaping may harm the lungs.

For instance, there’s evidence that vaping can lead to inflammation and tamp down immune defenses. “It can change inflammatory processes and actually seems to cause immunosuppression that leaves people more prone to infection,” Tarran says.

He says it’s not just the nicotine — there are other ingredients, including propylene glycol, glycerin and flavoring compounds that may lead to harmful effects when heated and inhaled.

For people who have never smoked cigarettes, it’s clear that vaping can lead to harm.

“There’s no question that vaping nicotine is not safe, but it’s safer than inhaling burning tobacco,” says Amy Fairchild, dean of the College of Public Health at Ohio State University. And a report from the National Academies of Sciences, Engineering, and Medicine, published last year, concluded that e-cigarettes may help adults who smoke conventional cigarettes quit smoking tobacco.

Fairchild and others writing in last week’s Science point to e-cigarette use as a form of “harm reduction” for cigarette smokers and argue that we need to develop regulations and policies that aim to halt adolescent use and access — while still ensuring that adult cigarette smokers continue to have access.

But at a time when 1 in 4 high school seniors reports vaping — and risks getting hooked on nicotine — this may be a tough needle to thread.

Meanwhile, the evidence of the harms of e-cigarette use is beginning to pile up. “Everything I’ve seen on data in the lungs suggests e-cigarettes are not safer” than cigarettes, Tarran says.

And given that vaping is relatively new, he says, researchers are just beginning to piece together the long-term effects. “I think the picture is changing as more data on e-cigarettes comes out,” Tarran says.