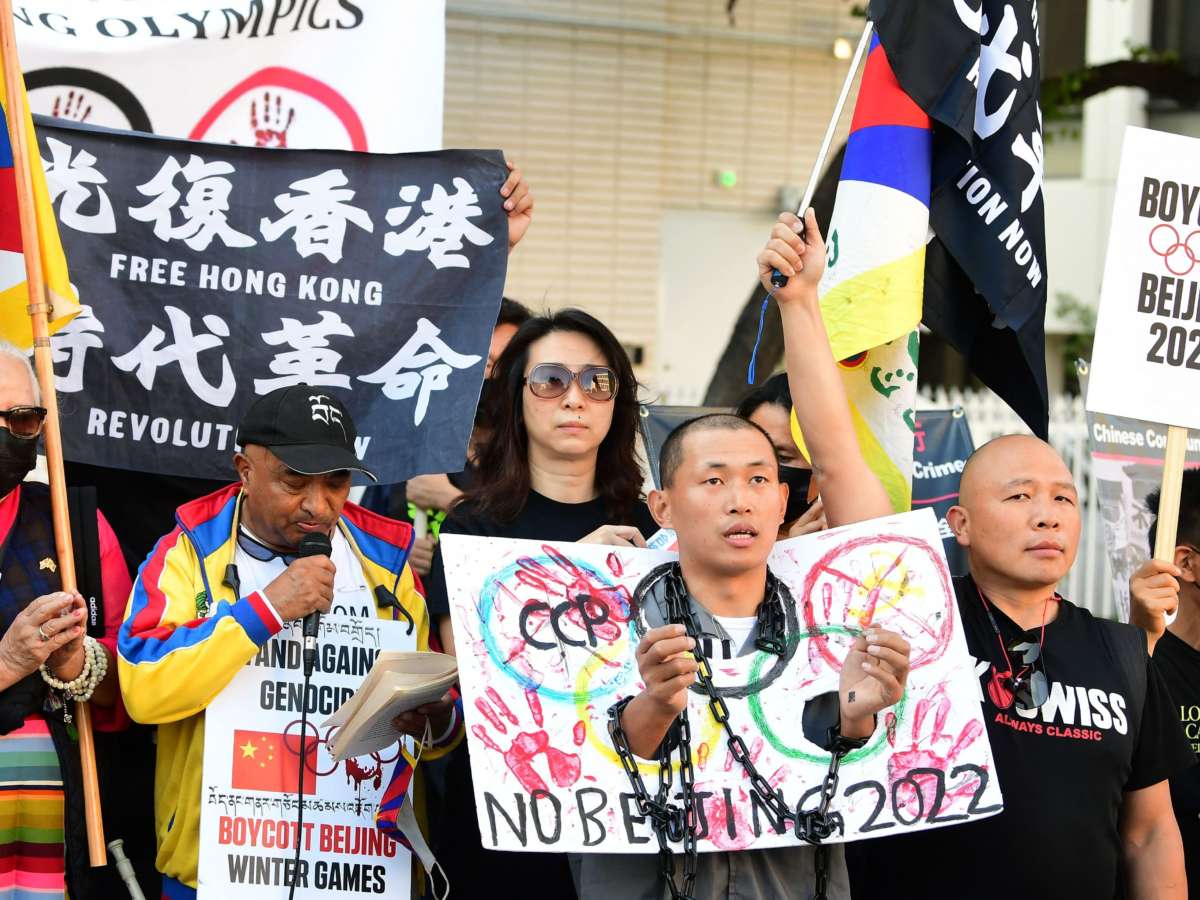 Activists rally in front of the Chinese Consulate in Los Angeles last month, calling for a boycott of the 2022 Beijing Winter Olympics due to concerns over China's human rights record.
Image credit: Frederic J. Brown

Uyghur rights organizations are applauding the U.S. government’s decision not to send any diplomatic or official representatives to Beijing for next year’s Winter Olympics.

White House press secretary Jen Psaki said Monday that the diplomatic boycott was prompted by the Chinese government’s “ongoing genocide and crimes against humanity in Xinjiang and other human rights abuses,” referring to the region in southwest China with a large population of Uyghurs and other Muslim minorities, such as Kazakhs.

The Uyghur Human Rights Project, a U.S. advocacy organization promoting the rights of the Uyghurs and other Muslim groups in Xinjiang, hailed the U.S. diplomatic boycott.

The organization emphasized that all governments should refuse to participate in the “spectacle of 21st-century genocide games.”

“The Chinese government is using the 2022 Winter Games as a showcase for its world leadership. A diplomatic boycott sends a strong signal: governments refuse to give a green light to the Uyghur genocide,” Omer Kanat, executive director of the Uyghur Human Rights Project, said in a statement.

Campaign for Uyghurs, an organization advocating for the human rights and freedoms of Uyghurs, said “the Uyghur genocide has cast a shadow over these games and made it morally untenable for them to occur in standard operation.”

“We reject that there can be a symbol of peace when the camps and surveillance apparatuses there stand as monuments to atrocity. We reject the Olympic games in the midst of a genocide,” the organization’s executive director Rushan Abbas said in a statement.

Abbas said this move sends a solid warning to Chinese officials that the diplomatic boycott shows the U.S. rejects the Chinese government’s conduct, and said she hopes other governments also join the boycott.

Likewise, the World Uyghur Congress, an international organization calling for Uyghur rights, said “while we welcome the announcement by the US as an important first step in ensuring that the international community stops legitimising the Chinese government’s genocide and crimes against humanity, we continue to urge governments around the world to take further bilateral and multilateral action.”

The announcement made Monday by the White House comes nearly two months before the games are set to begin.

Even though the Biden administration will not send any government representatives to the Games, U.S. athletes are still expected to compete.

“The athletes on Team USA have our full support,” Psaki told reporters during Monday’s press briefing. “We will be behind them 100% as we cheer them on from home. We will not be contributing to the fanfare of the Games.”

Rights groups have sounded the alarm for years about the Chinese government’s treatment of Muslim minorities in Xinjiang, which they say dramatically worsened starting in 2017. According to Amnesty International, hundreds of thousands of people there are subject to mass imprisonment and torture.

“U.S. diplomatic or official representation would treat these Games as business as usual,” Psaki said, in the face of China’s “egregious human rights abuses and atrocities in Xinjiang. And we simply can’t do that.”

China’s government has criticized the boycott, saying the U.S. should “refrain from politicizing sports.”