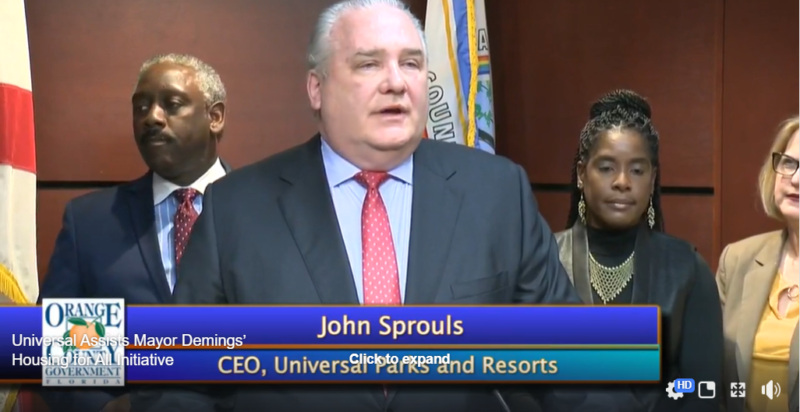 Universal Orlando is pledging 20 acres of land for the affordable housing crisis in Orange County. The announcement comes the day before Orange County will be asked to give $125 million in tax breaks to Universal.

“By donating the land, we ought to be able to make it extremely affordable because whoever ends up ultimately developing the land doesn’t have to pay for the land costs.”

Orange County Mayor Jerry Demings made the announcement Monday. Further details are not yet available, but Demings said the project would most likely be a mixed-use high rise with up to 1,000 units.

“Universal will also make an additional three acres of land available for mass transit in that area,” Demings said. “As you know, we see the two issues intertwined together, both transportation or transit and housing affordability.”

The donation comes the day before Orange County Commissioners vote whether or not Universal will get $125 million in tax breaks. That’s to extend Kirkman Road, which would be used for Universal’s new Epic Universe theme park.

The proposed tax breaks have been controversial.

We don’t want land donations @UniversalORL/@comcast — we want systematic change where ppl are heard before corporations.

If I was a OC Commissioner I would vote no on granting $125M to a themepark, just like I’ve voted no on terrible state tax bills too.https://t.co/2iXMqpB5dz