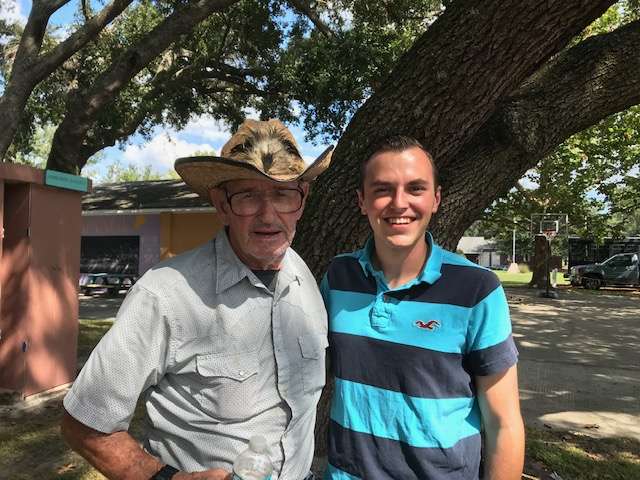 Bobby Burke stands with United Global Outreach’s Todd Currie in Bithlo. Bobby lived out of his car in the driveway of the nonprofit four years ago. Photo: Danielle Prieur

According to the United States Department of Housing and Development, the number of people ages 62 and older who are homeless and living in shelters has increased by almost 50 percent from 2007 to 2016. In Central Florida alone seniors make up about 10 percent of the homeless population. For this reason, many are living out of their cars.

Robert J. Burke knows a thing or two about cars.

“Look at that roadster. That’s a nice one. That thing would move faster than your car. Faster than mine too.”

The 76-year-old says he’s lived out of several cars over the past decade. Right now it’s a friend’s truck parked in their yard in the suburb of Kissimmee. He covers the windows with blankets and sleeps stretched out over the seats. At his age, it’s gotten harder on his back and hips. He’d like his own place. But he says he can’t afford it on the $800 a month he gets from Social Security.

“I ain’t got the money. I only make so much money. By the time I get through paying for everything, I’ve barely got anything left.”

A few years ago Burke was living out of the car he now uses for transportation. He parked it in the driveway of United Global Outreach, a nonprofit that helps homeless people in the area. Tim McKinney is the director. There’s no official count, but McKinney estimates around 100 seniors are living out of their cars in the neighborhood because they can’t afford rent.

“Our region has a well-documented problem with access to quality affordable housing.”

“To put that into some context for folks that are working that’s an hourly wage of about $17.65 an hour.”

The Central Florida Commission on Homeless estimates there are more than 3,600 affordable units in Orlando for extremely low income renters. The average waiting time for one of these units is five years.  That means Burke, who is on the waiting list, could be 81 years old before he can permanently move off the streets.

To listen to the full story, please click on the clip above. Or you can listen to it on Marketplace Morning Report.