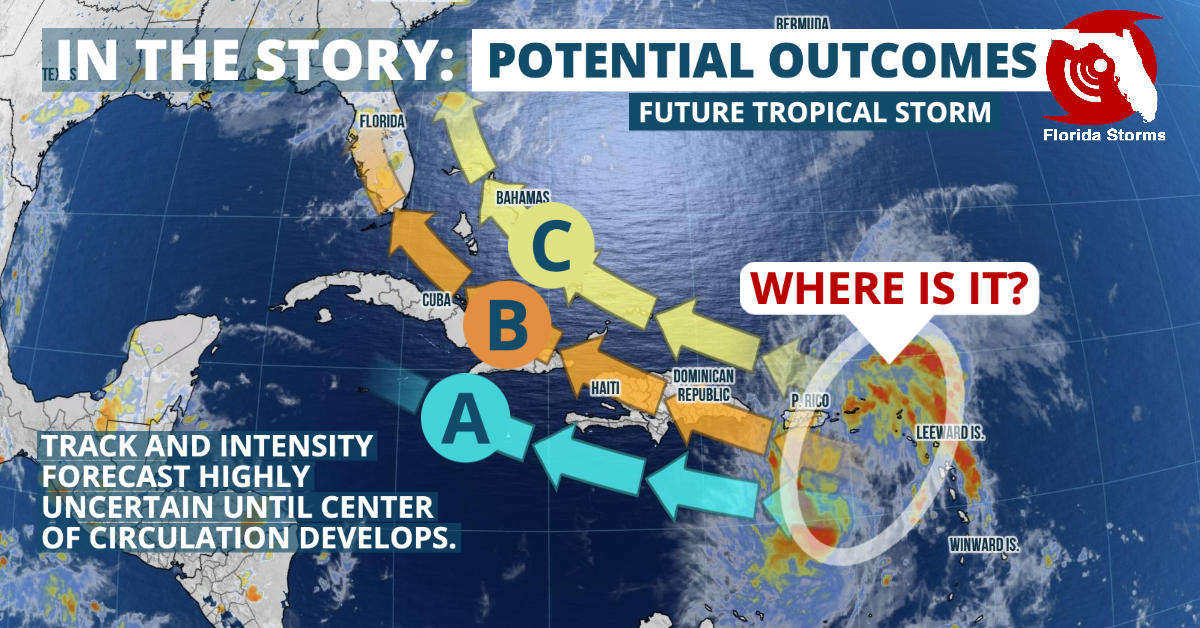 Rain and wind impacts from what is currently referred to as Potential Tropical Cyclone Nine (PTC Nine) are possible in Florida as early as Saturday. However, a credible forecast on the magnitude of those impacts can not be made until the system acquires a “well-defined center of circulation” and model simulations can be run on its projected path.

Heavy rain and tropical storm-force winds were observed in parts of the Lesser Antilles Wednesday afternoon, even though the system isn’t officially a tropical storm. A 52 mph wind gust was reported at St. Thomas in the U.S. Virgin Islands, where 3 to 6 inches of rain is expected to fall through Friday.

Tropical Storm Warnings remain in effect for the northern Lesser Antilles and extend westward to encompass Puerto Rico, the Dominican Republic, northern Haiti, and the eastern Bahamas. A Tropical Storm Watch is in place for the central Bahamas.

The forecast track and cone of uncertainty was shifted westward over the course of the past 36 hours, but was nudged more east with the 5 pm update on Wednesday. The majority of the more reliable forecast models have also flipped a bit back and forth in recent days, with the more recent runs trending back on a more northerly (or easterly) route. Forecasters at the National Hurricane Center have been very explicit in the uncertainties of their forecast, and Senior Hurricane Specialist Dan Brown “isn’t surprised” to see the inconsistencies in model runs, especially since the system still lacks a well-defined center.

The eventual track and strength of the future tropical storm will depend heavily on potential land interaction with Puerto Rico, Hispaniola and Cuba. This may not be known until a fix on the center of circulation can be made. For this reason, the “cone of uncertainty” may not represent all of the potential outcomes for PTC Nine. We’ve outlined those below and explained the reasoning behind them. Scenario “B” represents the most plausible solution and is closest to the official forecast.

Scenario A (Caribbean): This will be dependent on the center of circulation developing on the southern side of the large area of low pressure. In this scenario, PTC Nine would take longer to develop and most likely maintain a more westward track. Fast winds aloft on this journey might also cause considerable weakening or dissipation altogether. However, there is also the chance that PTC Nine, or its remnant circulation and energy, would enter the Gulf of Mexico by the weekend. This is a lower confidence scenario and should not be of great concern at this time.

Scenario B (Florida): The center of circulation is found to be near the center of the showers and thunderstorms. This would likely take PTC Nine near or directly over several mountainous islands of the Greater Antilles, thereby limiting its ability to intensify. However, after emerging back over the warm western Atlantic waters in the Florida Straits, PTC Nine could regain strength and take aim at South Florida. Complicating matters even more is the projected presence of stronger winds aloft between Cuba and Florida around the same time the storm would be moving through on Friday and Saturday, which could mitigate the potential impacts to the Sunshine State. This is the more likely track scenario, but it also represents the lowest confidence in an intensity forecast.

Scenario C (Stays out to sea): The cyclone’s center would form on the northern end of the broad circulation in this scenario, giving it room to intensify quickly as it gains distance from the island chains in the northern Caribbean. This would be a similar track to Hurricane Hugo (1989), Hurricane Irene (2011) and Hurricane Dorian (2019), all of which were not significantly affected by those land interactions. All of these storms intensified to hurricane strength (wind speeds of 74 mph, or 119 km/h) north of the Caribbean Islands and favored a more northward trajectory. This northward turn was, in part, due to the increase in wind speed, especially on the northeast side of the center of circulation. The higher winds act as a steering mechanism, similar to an individual rowing a boat. If the boat were traveling due west and the paddle delivered force to the right side of the boat it would turn more northward. However, there is still a distinct possibility, depending on how soon it makes the turn, that the portions of the Southeast U.S. would be affected by PTC Nine in this scenario.

Regardless of development, track or strength, Potential Tropical Cyclone Nine is expected to bring heavy rainfall and gusty winds to the Caribbean Islands over the next few days. The entire Florida Peninsula and eastern parts of the Florida Panhandle remain in the cone of uncertainty, with medium probabilities of tropical storm force winds arriving late Saturday and Sunday. However, there is still the possibility that PTC Nine will miss the continental United States altogether or even dissipate before approaching Florida.