Uncertainty In Congress Over Next Moves To Address Coronavirus Crisis 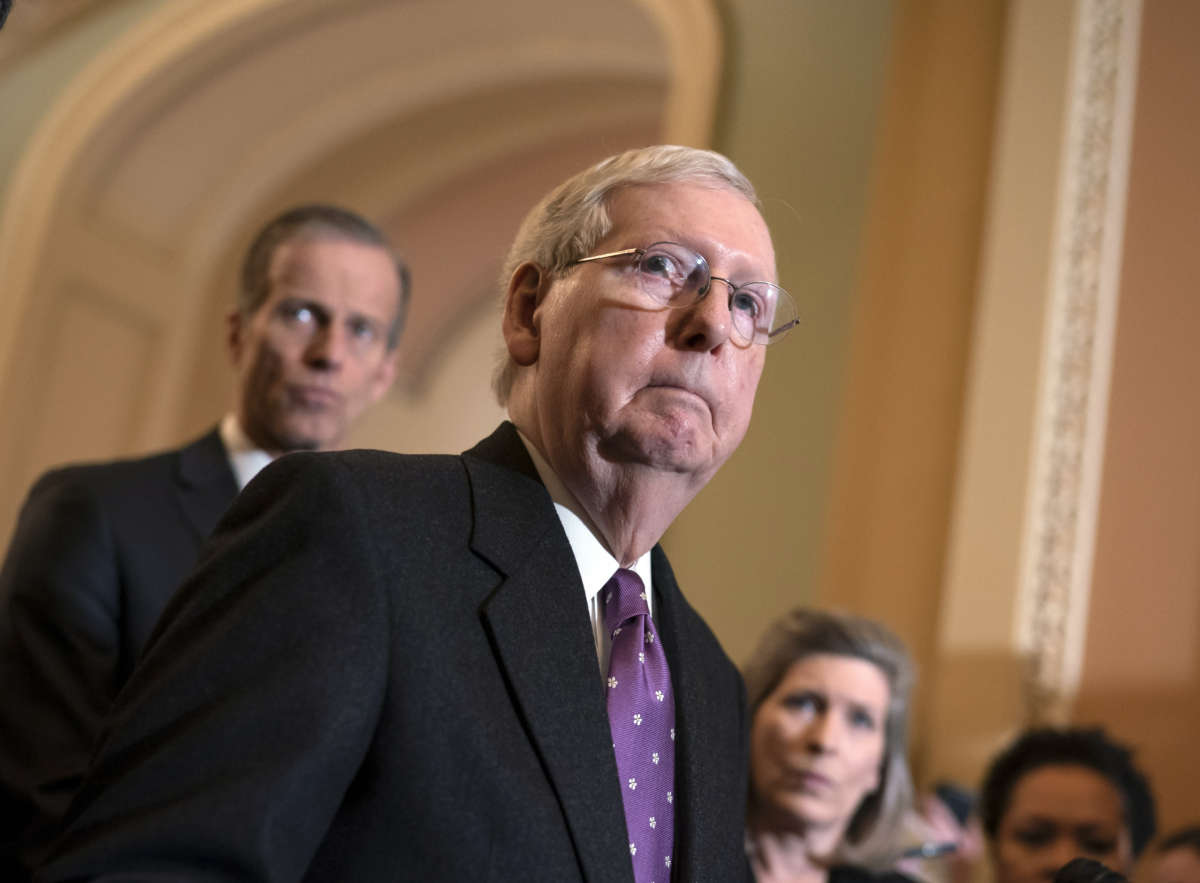 After taking the weekend off, senators will reconvene in Washington on Monday afternoon with the intent to approve this week the House-passed economic relief bill to blunt the effect of the coronavirus pandemic on American workers.

Senate Majority Leader Mitch McConnell, R-Ky., reversed course and canceled this week’s scheduled recess in order to take up the House bill. Despite GOP reservations to the bill — which calls for expansive new, federally guaranteed benefits for American workers — it is expected to pass the Senate after President Trump blessed it with a tweet and it passed the House with an overwhelming bipartisan margin.

“Of course, senators will need to carefully review the version just passed by the House,” McConnell said Saturday, “but I believe the vast majority of senators in both parties will agree we should act swiftly to secure relief for American workers, families, and small businesses.”

McConnell spent the weekend speaking to the chairmen of eight committees about additional legislation that will be required. In a statement late Sunday, McConnell said senators would consider other unspecified legislation to ease the financial and public health burdens from the pandemic. “It is clear that confronting this virus will take boldness, bipartisanship, and a comprehensive approach,” McConnell said. “The Senate is eager to work with the Administration and the House to deliver the solutions our nation deserves.”

Beyond the immediate relief bill that is on track to pass this week, the exact next moves from Capitol Hill are uncertain. Congress is grappling not only with how to help the country but also with how to keep government operations running without unnecessary risks to thousands of workers on Capitol Hill.

House Speaker Nancy Pelosi, D-Calif., advised House lawmakers on Sunday to have their staffs work from home. The House is in recess this week. “I am writing to encourage you to take steps to promote social distancing within your Washington, D.C. office as we engage in the District Work Period,” she wrote, “This may entail more than half of your Washington staff teleworking from home.”

House Democrats will convene a 2 p.m. ET conference call on Monday to discuss the next steps. Pelosi has so far been insistent that the House stay in session and that lawmakers report to work for scheduled business, but that position was complicated late Sunday when the Centers for Disease Control and Prevention issued new advice that all gatherings of 50 or more people be canceled or postpone for the next eight weeks in order to help prevent the spread of coronavirus.

The U.S. Capitol complex is closed to the public. A chief of staff for a Democratic senator told NPR that each office is making up its own policies for how to protect staff. “There is not a lot of clear direction, and because we run like 100 small businesses, there are thousands of staff coming into the buildings; it’s the worst combination of factors for exposure,” the aide said.

Concerns about health risks grew over the weekend as at least four additional offices disclosed coronavirus exposure. So far, no elected member of Congress has disclosed testing positive for COVID-19.

Intelligence Committee Chairman Adam Schiff, D-Calif., announced that a former staffer who left his employ 10 days ago tested positive. A Democratic aide confirmed to NPR that the former staffer was Daniel Goldman, who led the staff questioning during the impeachment inquiry. Goldman confirmed the diagnosis on Twitter. Schiff has postponed all of his events and meetings in his district and ordered his D.C. staff to work from home “for the foreseeable future.”

Rep. David Schweikert, R-Ariz., announced that a member of his D.C. office tested positive for COVID-19 and that he was closing his office with staff working from home “until further notice.” The congressman is now self-quarantining “until otherwise told by doctors.”

Rep. Andy Kim, D-N.J., said Sunday that his Capitol office would be closed “until further notice” and that all staff will telework after he received word of a confirmed case of coronavirus on the floor where his congressional office is located. His district offices in New Jersey are not accepting in-person meetings or walk-ins.

“These are serious times, and I’ve made this decision with the safety of my staff and the hundreds of people each week who visit my offices in mind,” Kim said in a statement.

Sen. Tom Carper, D-Del., disclosed Sunday that a member of his Delaware-based staff tested positive for COVID-19. The individual has had no recent contact with the senator or his D.C.-based staff, but the senator is closing all of his offices and his staff will be working remotely starting Monday.

Multiple GOP and Democratic aides who spoke to NPR on Sunday said there is rampant discussion among staff of Congress taking an extended recess. Both chambers are currently scheduled to return next week. Neither Pelosi or McConnell’s office has indicated whether it will alter the congressional schedule.