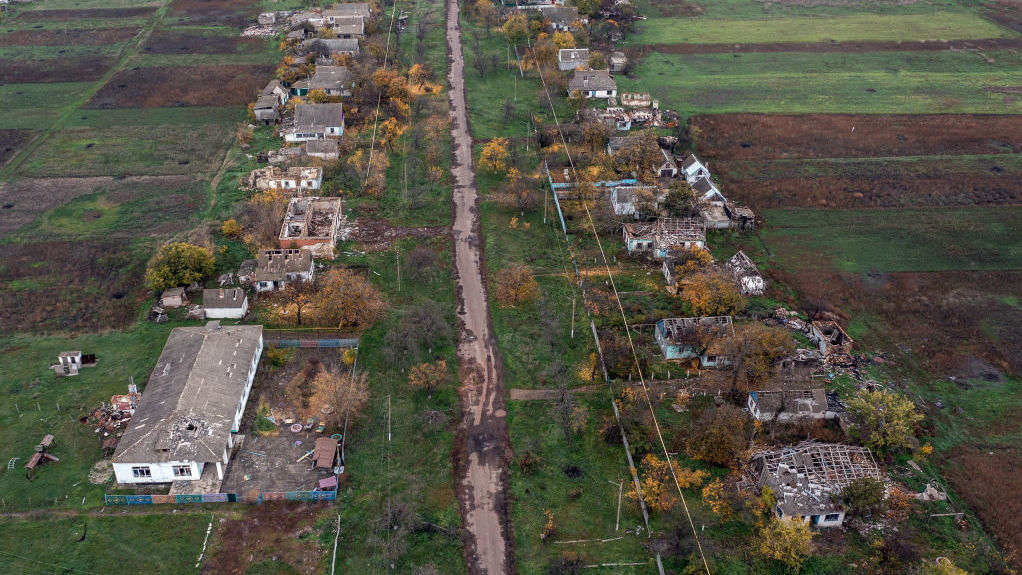 Buildings that were damaged during fighting between Ukrainian and Russian occupying forces line a village road in Kherson, Ukraine, on Oct. 30.
Image credit: Carl Court

MOSCOW and KYIV — Ukrainian forces entered the southern city of Kherson after Russia confirmed it pulled its troops from the strategic city, in a likely major setback to President Vladimir Putin’s war in Ukraine.

The Russian Defense Ministry said in a statement Friday that remaining troops have been transferred out of Kherson to the east bank of the Dnipro River early Friday with “not a single piece of military equipment or weapons” left on the other side.

Ukraine’s Defense Intelligence agency later confirmed that Ukrainian forces have entered the city of Kherson. “Kherson is returning under Ukrainian control and the Ukrainian military is entering the city,” the agency wrote in a Facebook post.

The agency also urged Russian soldiers abandoned by their military leadership and still in Kherson to surrender — offering to guarantee their rights would be protected under a program called “I Want to Live.”

“Your commanders ordered you to dress in civilian clothes and try to flee Kherson independently. Obviously, you won’t succeed,” the Ukrainian statement said.

Since early Friday morning, unconfirmed videos and photos have surfaced online of the Ukrainian flag being raised atop the Kherson city administration building and police headquarters, as well as jubilant locals in nearby villages celebrating liberation. Several videos appeared to show Ukrainians tearing down Russian billboards signs that read “Russia is Here Forever.”

The announced Russian withdrawal came amid reports that the area’s lone bridge across the Dnipro had been destroyed. Videos shared online appeared to show a large section of the bridge sheared off completely. Russian and Ukrainian officials traded accusations over who was responsible for the damage.

Earlier this week, the commander of Russia’s forces in Ukraine, Gen. Sergei Surovikin, proposed plans to withdraw from Kherson during a report to Russian Defense Minister Sergei Shoigu on national television.

In what appeared to be carefully staged remarks, Surovikin called the decision to withdraw to the eastern bank of the Dnipro River “difficult,” but one that would allow Russia to save the lives of military personnel and preserve Russia’s combat capability.

Shoigu agreed and gave the order.

The initial announcement drew skepticism from Ukraine’s government, which previously voiced concern that a withdrawal of Russian troops from Kherson city could be a Kremlin ploy to lure Ukrainian forces into the city.

Ukrainian Defense Minister Oleksii Reznikov told Reuters in an interview on Thursday he believed it would take “as a minimum, one week” for Russian forces to leave the city and that Moscow still has some 40,000 troops in the region.

The Russian withdrawal is widely believed to be a blow to Putin’s war effort in Ukraine — a view underscored by the Russian leader’s continued silence on the pullback.

The city was the first and only major city seized by Russian forces since they launched their invasion in February.

In September, Putin presided over a lavish Kremlin ceremony in which he illegally annexed the broader Kherson region and three other Ukrainian territories into the Russian Federation — claiming the lands were now Russia’s “forever.”

Despite abandoning Kherson to Ukrainian forces, Kremlin spokesman Dmitry Peskov insisted Russia still maintains a legal hold over the territory. “Here there can be no changes,” Peskov said.