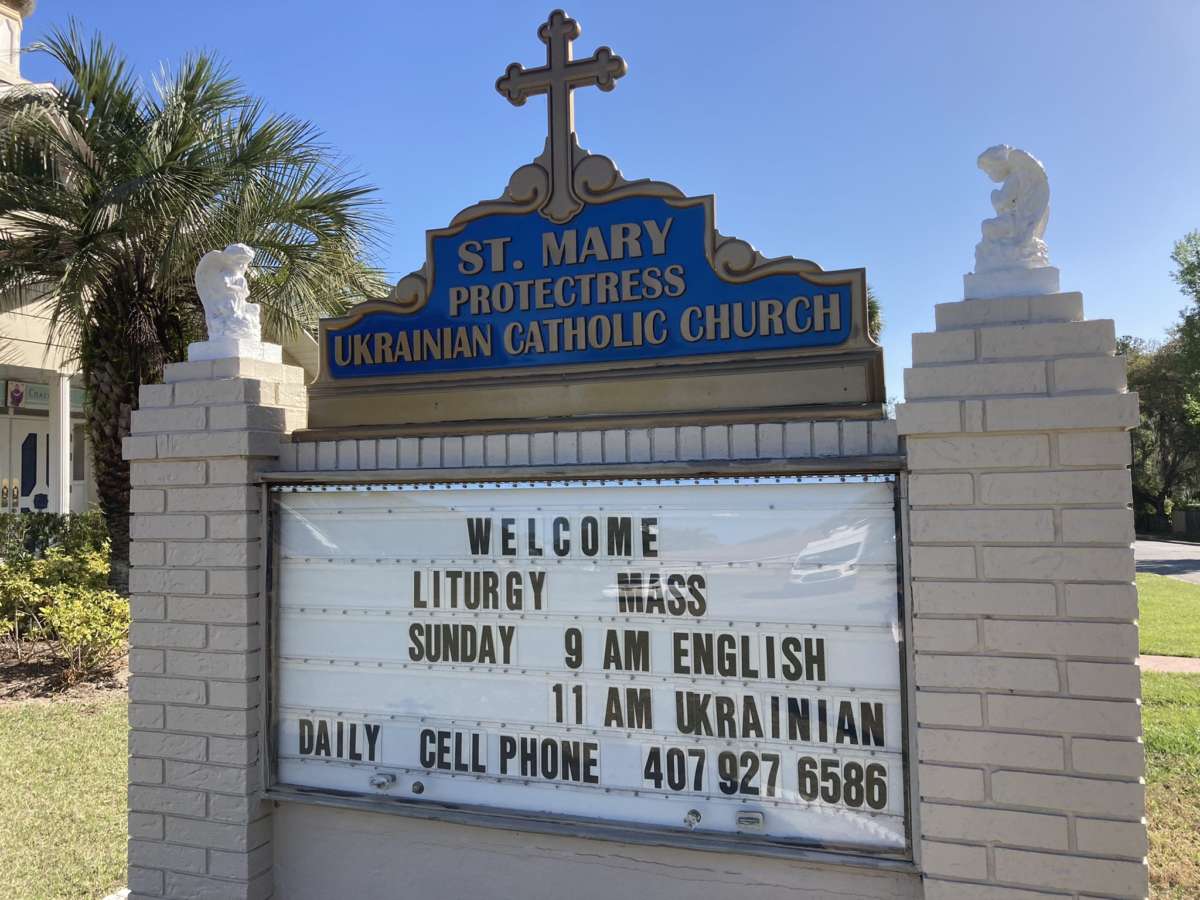 A Catholic Church in Apopka has opened its doors to offer support to the Ukrainian-American community in Central Florida. A prayer service for peace was held at the parish on Thursday morning after Russia began its invasion of Ukraine.

A prayer for peace after an invasion

Fr. Roman Kuzminskyi dressed in a long black cassock and a light blue and gold chasuble stands in front of his congregation. Originally from the Western part of Ukraine, he now leads St. Mary Protectress Ukrainian Catholic Church in Apopka.

Right now, he has the task of comforting a handful of parishioners who have come to the church just hours after Russia began its invasion of Ukraine.

The mood is somber, and audible sniffles are heard from the pews, as he leads his flock in a prayer for peace in Ukrainian.

When it’s over Kuzminskyi stays behind to talk with his parishioners. He shows them pictures on his phone of a bombed airport, near where his parents live. Thick black smoke seems to cover the tiny white building.

“I want you to see. It’s a photo from my parent’s house. It’s the Ivano-Frankivsk region. It’s the airport here. And this morning, oh my goodness. It’s western Ukraine,” said Kuzminskyi.

He says he’s been able to make contact with his family, but these images are frightening.

The plan to make a Catholic Church the center of support

That’s why father has decided to open the church to the nearby community every day. He’ll hold services just like this one most mornings and evenings, to make it convenient to attend for everyone.

“We will pray every day every night because what can we do?”

Parishioner Ivanna Polusmak is happy to have a place to go. She says she can’t describe how the last few days have felt. Her whole life is there, in Ukraine.

“My brother, my niece, my cousins, my aunts, my uncles, my classmates, my, I mean my people,” said Polusmak.

“It’s very important, nobody could have expected and we had hoped Ukrainian people had hoped that this will never happen. And unfortunately peaceful people are in need of our help. The help of the national community, the world. The entire world’s support. We cannot let this happen,” said Polusmak.

The Ukrainian people are strong, here and abroad

Polusmak says the Ukrainian people here in Central Florida and abroad are strong and will continue to fight in any way they can. She’s already planning a collection for items like food, money and clothing to send back home.

“Anyone who can help, like priest said, we are here. And we’re trying to get support for Ukrainian people, Ukrainian soldiers who fight there with what they have,” said Polusmak.

Polusmak talks with Father Kuzminskyi about the plans they have for the rest of the week. And tonight’s service.

The church clears out. The programs are collected. Father Kuzminskyi takes off his chasuble, that he only wears to perform the mass. And the building goes silent for the first time, except for father’s quiet laughter as he speaks fondly about growing up playing violin in Ukraine with his family.

It’s the first time his hazel brown eyes have lit up all day, and he goes outside to investigate whether the sun is still shining.