UF study asks: Can seniors have coronavirus without symptoms? 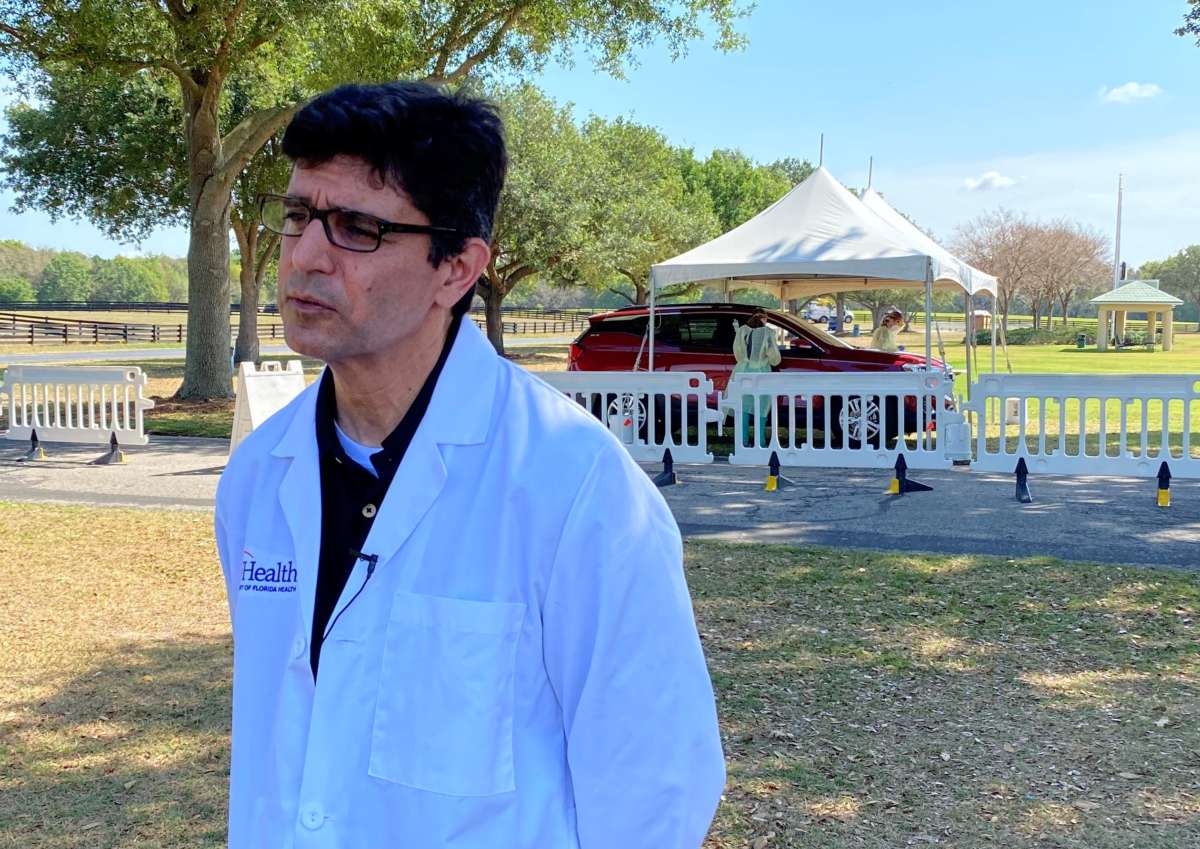 Drive-thru coronavirus testing in The Villages got underway this morning.

Jim Wilson, 76, queued up in a golf cart to get tested at one of the six stations. He’s had a persistent cough since returning from Honduras.

“Two weeks ago I was very probably nonchalant and thought there was overreaction,” he said. “I’d have to say in the last five or six days, that’s changed considerably.”

UF Health will process his sample.

But they will also test many others who have no symptoms as part of a research project into COVID-19 among seniors.

Dr. Michael Lauzardo, deputy director of the University of Florida’s Emerging Pathogens Institute, spoke with 90.7’s Joe Byrnes about the testing and research.

WMFE: If you could just give me a little description of what this effort is and the people who were involved in it.

LAUZARDO: So what we’re doing is a screening program, and also testing program, so it’s a two phases to what we’re doing here in The Villages. We collaborated with The Villages Health and UF Health as well as the local health departments to work together to try to address some concerns about symptoms that some of the residents may have. In addition, we’re doing residents to be given an opportunity to participate in a study to help us better understand whether or not individuals who still don’t have symptoms might be carrying the virus. Again, these tests are imperfect. There’s a lot that we don’t know, but we’re trying to get that information and see if it can inform policy as we move ahead.

WMFE: Doctor, is the research test, the surveillance test, is it fundamentally different from the clinical test?

LAUZARDO: It’s a great question. So it’s not fundamentally different. It’s the same kind of test. It’s just the way that the technical aspects are done are slightly different. So in other words, these are DNA or nucleic information. Let me back up. So it’s another DNA test but it’s actually RNA base but we’re looking at the genetic material of the virus. There’s something called primers that you use to be able to do what are called PCR tests. The primers are different between the two tests. The primers that we’re using for the research test is actually a European-based test that we got those primers a lot earlier. The other one is a test that’s used in the US that’s based on the CDC primers. There’s no gold standard. There’s one test that we use for clinical, because that’s been approved by the regulatory agencies. The other one is research use only and hasn’t been, but essentially the function between the two tests and at UF when we’ve been doing the test, they’ve matched perfectly. So we don’t anticipate there to be one better than the other.

WMFE: Tell me about who’s involved in the testing operation here.

LAUZARDO: So the testing operation is a lot of different staff from UF. We have, you have medical students, PA students, some nurses, as well, and also some of the UF faculty, and in back in Gainesville in the laboratory we have people from three different colleges, working in the laboratories, making sure that the test results are come out on time and doing the best we can with what limited supplies are available.

WMFE: How quickly can we be seeing results from your research?

LAUZARDO: We hope that the results will be back, again we’re going to look at them every day when we do get results. We’ll start to disseminate that or share that as soon as it becomes available, probably sometime next week.

WMFE: What could be some of the policy implications from what you find?

LAUZARDO: I think that’s a good question. There are so many unknowns. We’re not really sure exactly where this will take us, but I think what it will do is it will give us a lot of information as to what the risk might be to individuals who might have been exposed but are not exhibiting symptoms. We don’t expect that to be the biggest component. What we think is that what’s going on is limited to the youth, so in other words younger people who don’t exhibit symptoms but have the virus. But we think in older individuals or who might have weakened immune systems, we don’t think that they’re going to have the virus without being sick. So that’s our hypothesis, but we do the research to really answer that question. Do elderly patients or do older patients who are exposed to the virus, develop symptoms all the time, or do they sometimes have what we call an asymptomatic or no symptom state where they can spread to others? And that’s the really, really the crux of the research.