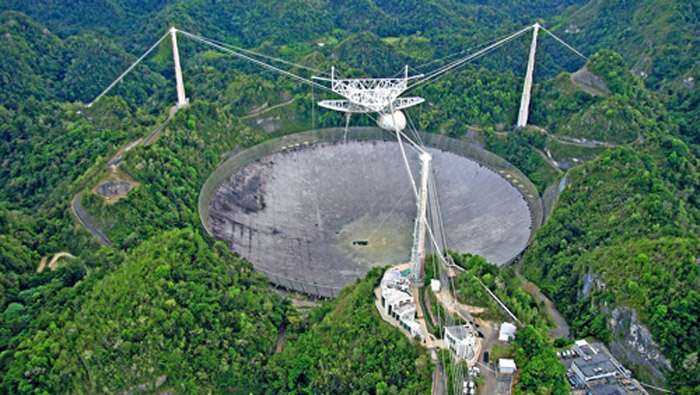 The University of Central Florida will soon manage the world’s largest active radio telescope. The Arecibo Observatory is located in Puerto Rico and it’s an 18-acre, 1,000 ft wide dish that allows scientist to look deep into our universe.

Using funding from the National Science Foundation, UCF will manage the observatory at the cost of about $20 million over the next five years.

Scientists use the telescope to track near-earth asteroids that could threaten Earth, and it helps researchers understand gravity waves, pulsars and other cosmic phenomenon.

The observatory is located about 50 miles west of San Juan. Florida Space Institute’s Ray Lugo said it received minor damage from Hurricane Maria. “We’re still operational but a little bit degraded performance. There is funding in the budget and it will be managed by UCF to do all the repairs.”

UCF’s management will do more than just repair the physical damage to the telescope. “This really provides us with the opportunity to help rebuild Puerto Rico from the Puerto Rico side,” said UCF Vice President Elizabeth Klonoff. “It gives us the opportunity to work with Puerto Rican students and scientists to work together in an institution where we have a lot of support.”

The acquisition comes as UCF is beefing up its space-related research. The university is planning an new Ph.D program in planetary science, and the observatory will add an addition 17 scientists to the school’s roster. “It really does solidify our position in doing space-related research,” said Klonoff. “So all of a sudden we’ve gone from a small but distinguished set of scientist to a very large set of distinguished scientist overnight.”

The observatory isn’t limited to just UCF faculty. “Basically any researcher in the world can propose to use the radio observatory of Arecibo,” said Lugo. “When you look at it from an overall management, UCF is well known as an organization that wants to collaborate with other universities.”

In fact, UCF has already partnered with one university on the project. A partnership with Universidad Metropolitana in San Juan will focus on public outreach and engagement through formal and informal education and help create a pipeline for students to study space sciences both in Puerto Rico and Central Florida by providing hands-on opportunities at the observatory.

The Arecebo radio telescope both collects radio waves as well as emits them, which classifies the observatory as an “active” radio telescope. The Five-hundred-meter Aperture Spherical radio Telescope, nicknamed FAST, is larger than Arecibo at 1,600 ft, but only receives radio data. “FAST doesn’t, and isn’t designed to, emit radio pulses, while Arecibo does,” said astronomer J.L. Galache on Twitter. “This is great news, and I hope UCF can keep Arecibo open for business for decades to come,” he said after hearing the announcement.

The telescope was featured in the movies “Contact” and the Bond flick “Goldeneye.” UCF officially takes ownership April 1.