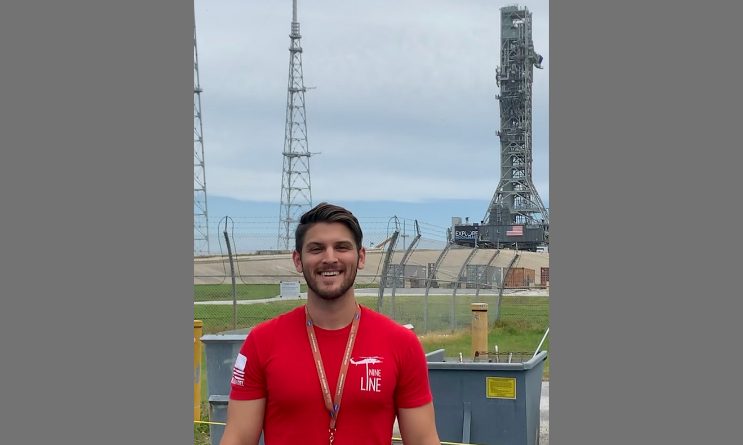 A partnership between UCF and NASA is helping students launch their career with Kennedy Space Center.

As a kid, Bryce Frase looked at the moon through a telescope — hoping to work in the aerospace industry. “NASA was the big dream that I never thought would happen.”

After serving in the military, Frase enrolled at UCF, studying electrical engineering. In his first semester, he heard about NASA’s Pathway Program — a paid internship program awarded to current university students to work in federal agencies while also studying in school.

Frase joined Kennedy Space Center’s 3D Printing Center, printing and testing new parts for NASA programs including its new moon rocket, SLS. While he learned about these things in the classroom, his NASA internship gave him valuable hands-on experience. “It cemented those concepts that I was working on and on the academia side in the classroom,” he says.

For NASA, it’s a way to train and develop future employees.

“NASA uses the Pathways Program as a way to build its future workforce,” says Sellers. “We’re looking for students who are passionate about what we do, our vision, our mission, our core values. These students also are currently learning the skills and gaining the knowledge that it will take to get us to the moon and beyond.”

NASA says 385 students have gone through the program since its creation back in 2013. Frase graduated last month, and is now employed full time at Kennedy Space Center.

Since March of last year, NASA has added 52 interns to the program, with another 16 starting this month. UCF says around 30 percent of Kennedy Space Center employees are UCF alumni.