UCF Researcher: How Are Planets Formed? 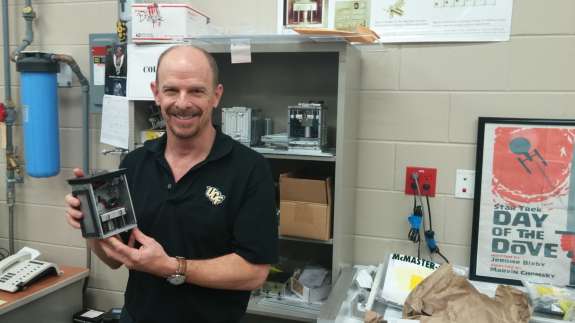 UCF Professor Josh Colwell holds up a prototype of one of the low-Earth orbital experiments.

Scientists are missing a key part of information in uncovering how planets are formed in our universe.

One University of Central Florida researcher received a grant from NASA to conduct an experiment to shed some light on the birth of planets – in low-earth orbit.

The primary focus of Colwell’s research into how planets are formed revolves around another question: how do things stick together in space?

New planets form in what’s called a protoplanetary disk – a circular area of dust and gas that surround a newly formed star. These pieces of dust group together in space, much like dust bunnies under your couch, and hang on to each other.

But once these clusters get to be around 1 cm across, Colwell says they have a hard time sticking together. “As the particles get bigger, gravity becomes more important and the surface forces between them become less able to hold things together. Gravity only helps particles stick to each other once they become as large as maybe 10 km or 100 km across,” he said.

So how does something go from the size of a dust bunny to the start of a planet?

That’s what he’s hoping to find out. In his experiments, he takes particles like silica, glass, and synthetic moon dust and shoots them at one another.  “It’s like a miniature dirtball fight – and [we] see the collisions there so we can do some low velocity impact experiments there.”

Colwell’s hoping to find the right combination of materials that stick. “Can we have collision growth and what are the conditions that lead to that collision growth so we can bridge that gap from the molehill size to the mountain size,” says Colwell.

Colwell’s drop tower used to test particles in his lab.

To mimic micro-gravity environment, Colwell and his team use a free fall tower. He loads up particles in a clear box, straps a high speed camera to the box and drops it. Experiments on earth only get about an eighth of a second of free fall. But even in that short time, scientists can learn a lot.

But there’s still a lot more Professor Colwell and his team can learn. One of the biggest constraints of his experiments is short period of time the particles are in that micro-gravity environment. To combat that, he’s sent experiments up on the Vomit Comet – a plane that flies on long parabolic arcs. It simulates weightlessness for about twenty seconds.

That’s still not enough time, say Colwell: “To study these gentle collisions we need a long time available for those particles to move at those very small paces without being completely dominated by surface gravity here on earth,” he said.

Colwell’s previous experiments here on Earth, and on the Vomit Comet, won him a grant from NASA to send his experiments to low-earth orbit in a satellite called CubeSat. Instead of 20-seconds of micro-gravity, Colwell’s experiments will have up to three years to run.

The challenge now, he says, is designing an experiment the size of a thermos. His team is working on that, and they’re getting ready for a launch starting just next year.

“We’re still trying to find out how nature has managed to do such a good job at creating planets. It’s made a beautiful one we’re sitting one here at the moment and many other around our own star.”

Colwell’s team performs experiments on board the Vomit Comet