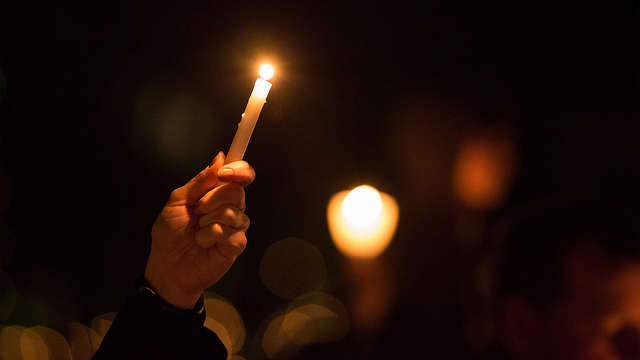 Many students affected by the Marjory Stoneman Douglas High School mass shooting now are freshman at the University of Central Florida. Hundreds gathered yesterday evening at the university for a vigil. Photo: Flickr Creative Commons

Many students affected by the Marjory Stoneman Douglas High School mass shooting now are freshman at the University of Central Florida. Hundreds gathered yesterday evening at the university for a vigil.

Kyra Parrow lost several close friends as a senior at the high school. She’s now a Freshman at UCF.

As the last victims’ names were read and candles extinguished to the music of Leonard Cohen’s Alleluia she said:

Her response? To intern in Washington D.C. with a victims’ right group called Rise.

Robert Schentrup a sophomore at UCF lost his sister Carmen in the shooting.

He decided to join the March for Our Lives’ bus tour this past summer. He says he’s proud of the progress he’s seen as a result:

“Look at the all the states including our own that have red flag laws now. Legislation like that would have prevented Parkland.”

Red flag laws allow law enforcement to temporarily remove guns from those a judge believes are a danger to themselves or others.

But Kyra Parrow says the important thing-whether MSD alumni become politically active or not-is to remember to live for those whose lives were lost last Valentine’s Day.

“You can do anything. Have your call for action. Go paint, go surfing. Do whatever live your life because there are 17 people who can’t. And we can’t let evil take that away from us.”

More than 400 Marjory Stoneman Douglas alumni now are students at the university.