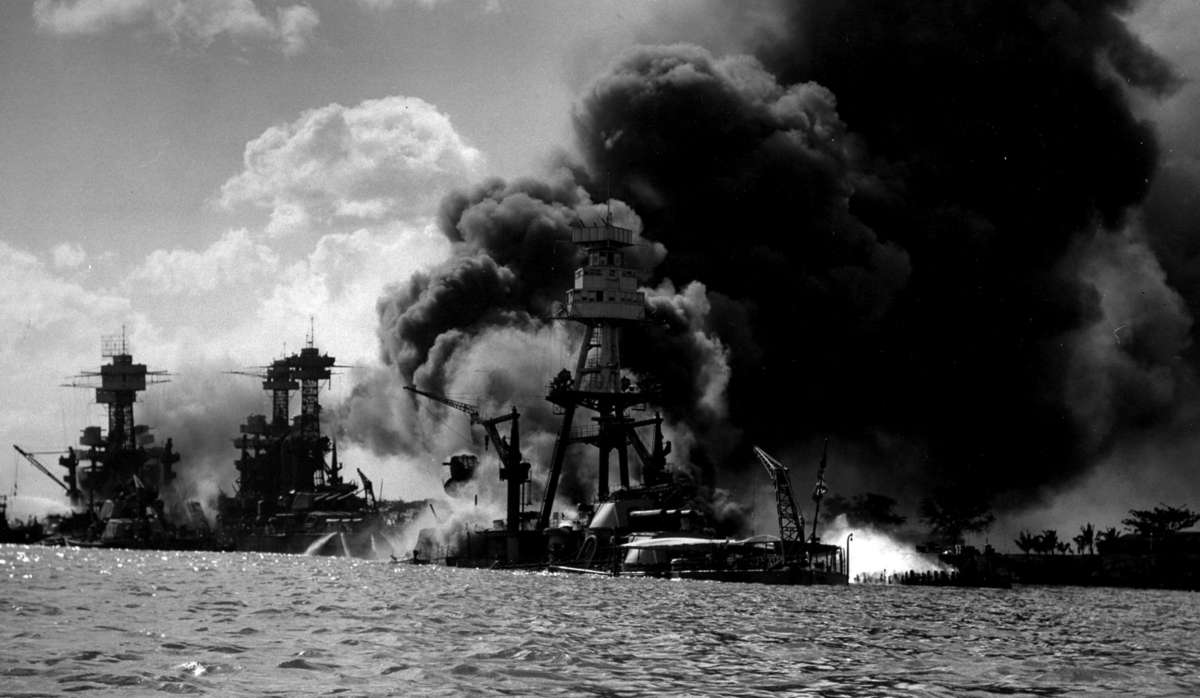 This photo provided by the National Park Service shows Battleship Row during the Dec. 7, 1941 attack on Pearl Harbor. It's caption: Dense smoke rises from the forward and midships portion of the USS Arizona BB-39. Just ahead of her, left to right, the sinking USS West Virginia BB-48 outboard with the slightly damaged USS Tennessee BB-43 inboard.

Today — Dec. 7, 2021 — marks 80 years since the surprise attack on Pearl Harbor. It claimed the lives of 2,403 Americans and launched the United States into World War II.

University of Central Florida’s Barbara Gannon, a professor of military history, spoke with WMFE’s Joe Byrnes about the American veterans of that war and what her students can learn from them.

She leads the UCF Community Veterans History project, which records their stories.

BARBARA GANNON: We think of the notion that World War II veterans, they came home and there was a ticker-tape parade and everyone honored them in their communities and listened to their stories.

But what’s interesting, because so many of their generation were in the war, because people on the homefront felt they too had contributed, in some ways when people came back from World War II everyone was like, “Well, that’s over. We won. Good job. Get to work.”

And they were a generation of men who’d grown up in hard times in the Depression and then war, and they weren’t men that were going to talk about their feelings. They weren’t going to brag. They thought the job was well done and everyone agreed with them. To the general public, they would often not speak at all — and even to their children — about what happened to them, particularly if it was a very hard combat or bad memories. We’ve actually sometimes, especially when they’re older, interviewed veterans with their family members nearby, and they’ll say I knew none of they did not tell us any of that.

So you had a generation where altogether in World War II 16 million people were in uniform, 12 million by the end of the war. So most people had shared the experience. Many didn’t think they were special. And everyone said come home and get a job and get on with your life. And they did.

WMFE: Dr. Gannon, tell me about your veterans history project at UCF.

GANNON: We call it the UCF Community Veterans History Project. And what’s funny is when I got here I said, Well, why do we throw in the community part? But one of the things we do is partner with community organizations. And we also emphasize the UCF veterans, we have almost 1,500 veterans on campus, and we work with them and for them and welcome them home. Very important. We also do all sorts of things we emphasize all the wars, all different experiences. Right now. We’re working with a lot of women veterans, who are members of the Daughters of the American Revolution.

And our idea is when you listen to someone’s story, it’s not just for recording them for posterity, which is important. But you’re letting them know you appreciate them. And it’s kind of a welcome home and thank you.

WMFE: What does it mean to you personally, to hear the stories from some of these World War II veterans?

GANNON: Particularly in covid, all these difficult times we’ve had recently, it’s funny, my students, it’s been really hard on them. And one of the things I say to them as I hope you get from these people in my military history class or people working in the veterans history project that people have gone through very bad time. I’m not going to say their times worse than yours. You know, I’m just going to say they went through hard times and so are you going through hard times, and I want you to see that they got through these and they were resilient.

I always, I had this joke one day in class, and I said, “You know, the Class of ’42 didn’t want to be on Okinawa. And none of us wanted to be in a pandemic. So I also hope that they can learn from these Americans of all particularly — and I really like this — of all races, ethnicities, men, women, young, old people, no different than them, people in college, just out of college, never went to college, that they can learn that they too can live through difficult times.