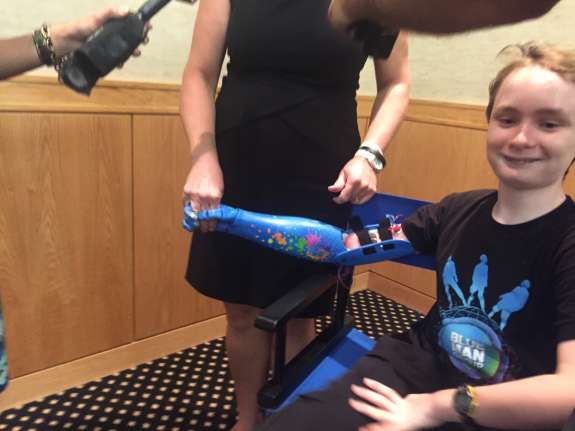 An Orlando nonprofit that 3-D prints free bionic arms for children is expanding. And to kick off the expansion, they gave a 3-D printed arm to autistic 12-year-old.

Wyatt Falardeau had his arm amputated shortly after birth. He’s a huge fan of Blue Man Group, and earlier this month, they gave him a new robotic arm.

Wyatt is the third kid to get an arm donated by Limbitless Solutions. The group of University of Central Florida engineering students and grads made headlines last summer when they 3-D printed a bionic arm for just $350.

Traditional bionic arms are expensive, and kids outgrow them. Limbitless Solutions put the 3-D printed designs online, for free. And now it has a new partnership with UCF: The Center for Applied Biomedical Additive Manufacturing, or CABAM.

John Sparkman, one of the founding members of Limbitless Solutions, said UCF is poised to become the flagship university for biomedical engineering research.

“With the backing of UCF and the new center CABAM, Limbitless Solutions will now be able to put more research and creativity into every piece of equipment it produces,” Sparkman said. “This also means helping change the lives of children here in our community and around the world.”

CABAM has big plans: an interdisciplinary research and development lab to build cheap, functional prosthetics. They also plan to bring in other universities and the medical industry in as partners.

“Our job is to become the epicenter for this biomedical research,” said Michael O’Donnell, director of the Office of Innovation and Entrepreneurship at UCF. “And as an epicenter, you should be spinning out new entities.”

Limbitless has gotten requests for robotic arms from kids in 40 countries. That’s, in part, because of Iron Man. Robert Downey Junior, in character as Tony Stark, gave an Iron Man arm to Alex Pring. That video has been viewed more than 50 million times.

Alex, wearing a red bow tie and the Iron Man arm, was at UCF for the announcement.

Alex is still trying to decide what his next arm will be, but Captain America is a possibility. He’s not sure what he wants to do when he grows up, but his mom says he knows he wants to help people.

“Because if we help other people, then they can help there selves with everything,” Alex said.