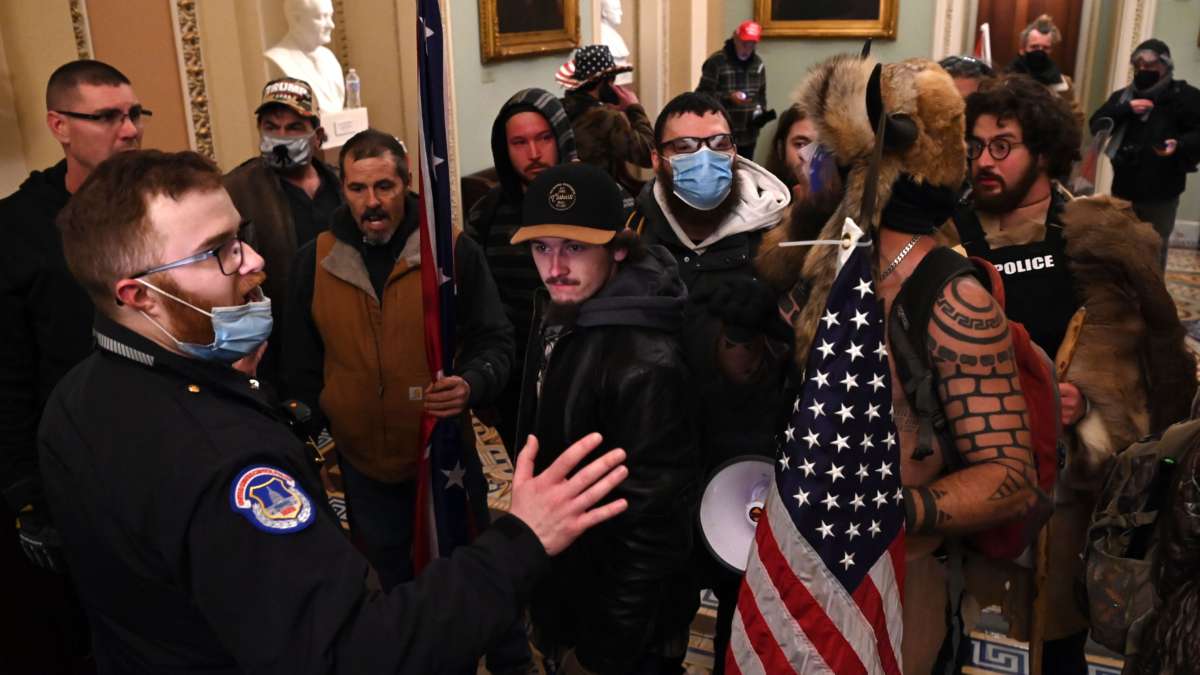 Pro-Trump extremists, including Jacob Chansley, the "QAnon shaman" known for his painted face and horned hat, intended "to capture and assassinate elected officials," the Justice Department says in a new court filing. Chansley was taken into custody in Arizona.
Image credit: Saul Loeb

Members of the pro-Trump mob that staged an insurrection at the U.S. Capitol last week intended “to capture and assassinate elected officials,” federal prosecutors say, in a new court filing against Jacob Chansley, also known as the “QAnon Shaman.”

Chansley wore horns, face paint and fur as he stood on the Senate dais – where he left a threatening note for Vice President Mike Pence, prosecutors say.

“It’s only a matter of time, justice is coming,” the hand-written note to Pence read, according to the court document. The note was left at the spot where, moments earlier, Pence had been poised to preside over a joint session to certify President-elect Joe Biden’s victory over President Trump. Chansley told the FBI that he believes Pence is a “child-trafficking traitor.”

Chansley told investigators that he didn’t mean the message to Pence as a threat.

The U.S. Attorney’s Office in Arizona filed the memorandum on Thursday as part of its argument against releasing Chansley while his case proceeds. He is slated to appear at a detention hearing Friday afternoon in Phoenix.

Chansley is charged with two felonies: obstructing the conduct of a law enforcement officer, and obstructing an official proceeding. Prosecutors say that as he committed those actions, Chansley was also carrying a dangerous weapon – specifically, “a six-foot spear.”

Prosecutors say Chansley should remain in custody for a variety of reasons, including his part in the riot and his avowed intent to return to Washington to protest Biden’s upcoming inauguration.

The U.S. attorney’s office also states that Chansley would not likely conform to court-imposed conditions on his release, noting that while in custody, he has refused to eat anything other than organic food. Prosecutors also note that Chansley has shown he can travel without being traced. And because he is widely associated with the horns-and-fur costume and face paint he wore at the Capitol, prosecutors say, Chansley “is virtually unidentifiable when not wearing it.”

The memorandum, like other documents prosecutors have filed in Chansley’s case, notes that he refers to himself and other rioters as “patriots.” The filing gives new details about how U.S. prosecutors view the insurrection – a term the U.S. Attorney’s Office used repeatedly in its filing.

“Chansley has made himself the symbol of a radicalized insurrection movement, and has professed his intent to act in the future as he did at the Capitol on January 6,” the memorandum states.

It notes Chansley’s status as a “shaman” within QAnon, which the prosecutors variously define as “a dangerous extremist group … founded on an imaginary conspiracy theory,” and a cult that “preaches debunked and fictitious anti-government conspiracy theories that a deep state is out to take down the current administration.”

Describing the threat they say the defendant poses, the memo states, “Strong evidence, including Chansley’s own words and actions at the Capitol, supports that the intent of the Capitol rioters was to capture and assassinate elected officials in the United States Government. ”

Prosecutors also note that Chansley sought to mislead officials about his drug use. While he allegedly claimed to be a weekly user of marijuana, they note, he has described using peyote and mushrooms in his podcast (on which he uses the name “Jake Angeli”), describing the practice as part of his pursuit of spiritual insights.

There are also mental health concerns, the memorandum states: “Chansley has spoken openly about his belief that he is an alien, a higher being, and he is here on Earth to ascend to another reality.”

Chansley and dozens of other people who breached security at the Capitol have been arrested in the past week. In many cases, they have been identified by citizens and authorities from photos and videos that were taken inside lawmakers’ offices and other areas in the congressional complex.

The attack on the Capitol has been linked to five deaths, including Capitol Police officer Brian Sicknick and a woman who was shot by police as she climbed up a barricaded door.

Federal prosecutors say insurrectionists’ attempts to violently overthrow the U.S. government are not over, noting an increase in online rhetoric since Jan. 6 and stating, “Media and FBI reports have detailed carefully-planned insurrection attempts scheduled throughout the country in the coming weeks at every state capital, including the [Arizona] capitol.”

Arguing that Chansley poses a flight risk, the court filing states that he does not have a stable job that would require him to remain in Arizona. And because of Chansley’s status within QAnon, the court filing states, he has “the ability to raise large sums of money for travel (and other activities) quickly through non-traditional means.”

The memorandum says of Chansley:

“He believes that global elites are running the world, that United States leaders are part of a secret rings of child abusers who practice satanic worship, and other debunked theories.

“He has repeatedly demonstrated dramatic, erratic behavior, an inability to conform to societal norms, and an unwillingness to appreciate the consequences of his actions.

“He abides by his own belief system, acts accordingly regardless of the criminal consequences, and brings others along with him.

“His ability and willingness to conform his behavior to pre-trial supervision conditions appears to be virtually nil.”