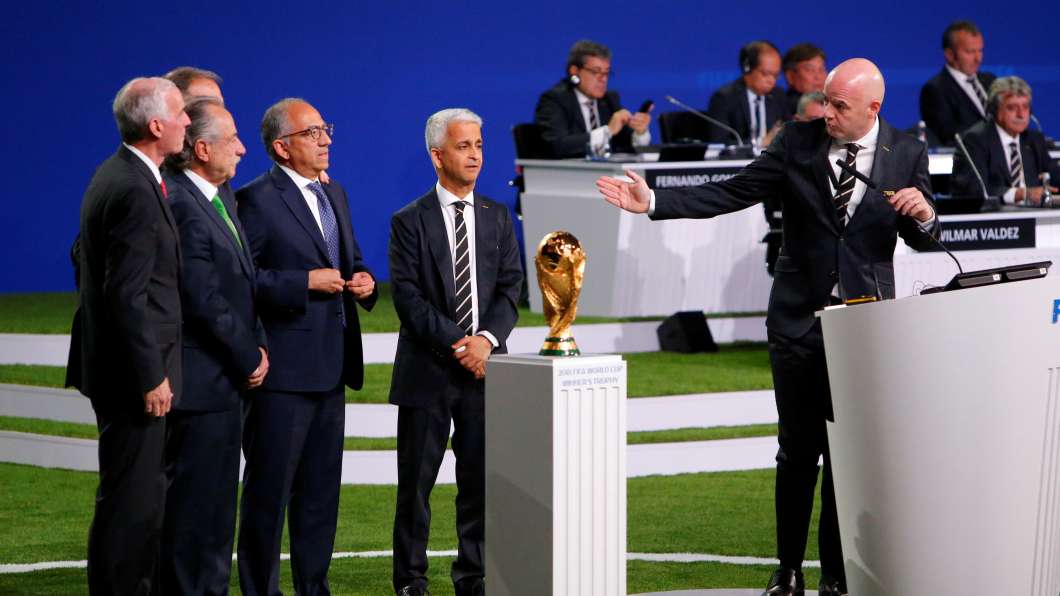 The 2026 FIFA World Cup will be held in the U.S., Mexico and Canada, with a united bid from North America winning the right to host soccer’s showcase event, the sport’s world governing body decided on Wednesday.

The united bid was selected over a competing bid from Morocco, in a vote among some 203 FIFA members that was held in Moscow on the eve of the 2018 World Cup, hosted by Russia. The tally was 134 votes for the united bid and 65 votes for Morocco.

“Thank you so, so very much for this incredible honor,” Carlos Cordeiro, president of the U.S. soccer federation, said after the vote was taken. “Thank you for entrusting us with this privilege.”

It will be the first time three countries have joined to host the World Cup — previously, South Korea and Japan had jointly hosted the 2002 Cup. The plan calls for the U.S. to host 60 matches, and its neighbors to host 10 each.

The last time the U.S. hosted a World Cup match was in 1994; Mexico first hosted in 1970. Both of those tournaments remain among the most-attended World Cups in history. Mexico is set to become the only country to host three World Cups, having also hosted in 1986.

Responding to years of scandals and suspicions over its selection process, FIFA sought to position this vote as a transparent and open process. After the vote was tallied, FIFA revealed how each country had voted, for instance.

None of the hopeful host countries took part in the vote; neither did U.S. territories that have soccer federations, such as Puerto Rico and the U.S. Virgin Islands.

Among countries that have been in the news lately, here are some votes that stuck out: North Korea voted for Morocco, as did France, the Netherlands and Italy. Iran cast the sole vote for “None of the bids.”

Before the vote was held, the organization displayed its evaluation of the two top bids, showing that it had given a decisive edge to the North Americans in several crucial criteria, covering stadiums, accommodations and transport.

The vote was the crowning moment of the 68th FIFA Congress, held the day before Russia will face Saudi Arabia as the 2018 tournament begins in Moscow. It will conclude on July 15.

At the end of the proceedings, FIFA President Gianni Infantino of Switzerland — who was narrowly chosen to lead the organization two years ago, after former president Sepp Blatter resigned in disgrace — announced that he will run for reelection next year.