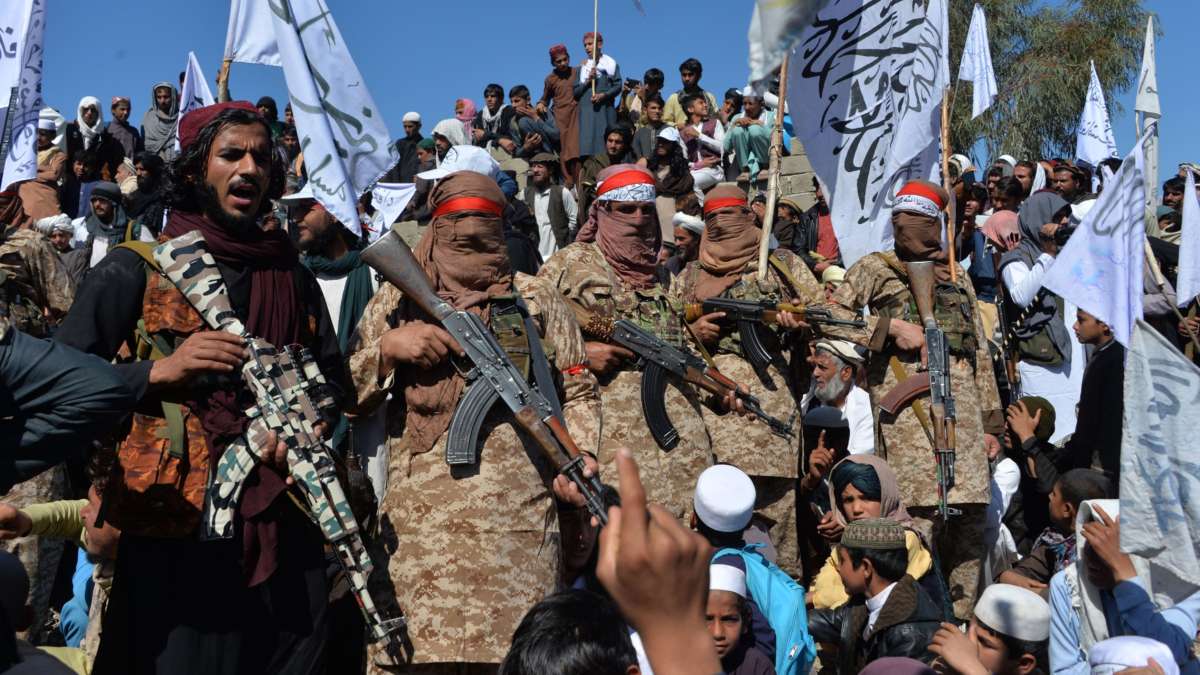 Militants linked with the Afghan Taliban gather Monday for a ceremony in Laghman province, celebrating the agreement the group signed with the U.S. over the weekend. Since the deal was announced, the Taliban have resumed attacks in Afghanistan.
Image credit: Noorullah Shirzada

Just days after the U.S. and Taliban announced the terms of a deal lauded as a foundation for peace, Afghanistan is once more embroiled in deadly violence.

On Wednesday, the U.S. carried out its first airstrike on the Islamist militant group since announcing the agreement. A U.S. military spokesman said the “defensive strike” in Helmand province was aimed at disrupting Taliban fighters “who were actively attacking an [Afghan security] checkpoint.”

“Taliban leadership promised the [international] community they would reduce violence and not increase attacks,” Col. Sonny Leggett of the U.S. forces in Afghanistan said in a series of tweets, noting that Tuesday alone saw the militant group launch 43 attacks on checkpoints across Helmand.

“We call on the Taliban to stop needless attacks and uphold their commitments. As we have demonstrated, we will defend our partners when required.”

In a span of just 24 hours, a wave of Taliban assaults has left civilians and security forces dead in more than a dozen provinces, according to a spokesman for the Afghan Ministry of Interior. Local media report that at least 16 Afghan soldiers were killed in an attack in the province of Kunduz.

Amid the Taliban offensive, President Trump spoke on the phone Tuesday with the group’s chief negotiator, Mullah Abdul Ghani Baradar, making history with what is thought to be the first direct call between a president and a top Taliban official since the U.S. invaded Afghanistan nearly two decades ago.

The White House has not officially released a readout, but the Taliban, in their own summary of the 35-minute conversation, says the president commended Baradar.

“You are a tough people and have a great country, and I understand that you are fighting for your homeland,” Trump told the Taliban official, according to the group’s readout. “We have been there for 19 years and that is a very long time, and withdrawal of foreign forces from Afghanistan now is in the interest of everyone.”

More than 2,400 Americans have died in Afghanistan since the U.S. invaded the country with the intent to overthrow the Taliban — which had harbored Osama bin Laden, leader of al-Qaida and orchestrator of the Sept. 11, 2001, attacks. The financial cost of the war has been estimated at $1 trillion.

Now the Trump administration is seeking an exit from the longest war in U.S. history. The deal announced Saturday lays the groundwork for the withdrawal of all American troops and supporting personnel within 14 months, beginning with a 135-day window to reduce its troop levels in Afghanistan to 8,600.

U.S. officials, though, have insisted that the drawdown is conditioned on the Taliban’s commitment to severing ties with — and preventing operations by — other insurgents, such as al-Qaida and the Islamic State. And Leggett, the U.S. forces spokesman, said Wednesday that American troops have the responsibility of defending their partners in the Afghan security forces.

Taliban fighters “appear intent on squandering this [opportunity] and ignoring the will of the people for peace,” Leggett added.

Other signs of trouble for the deal have surfaced in the capital, Kabul, where Afghan President Ashraf Ghani earlier this week rejected the timeline of another key element of the agreement: a prisoner swap that includes the release of up to 5,000 Taliban fighters in exchange for up to 1,000 Afghan security forces.

“It can be part of the negotiations,” Ghani told a news conference Sunday, “but it cannot be a precondition.”

International observers, including the United Nations, have called for the Taliban to halt their offensive and resume the “reduction in violence” deal that lapsed late last month.

The partial truce, according to the U.N. Assistance Mission in Afghanistan, is necessary to maintain “an environment conducive to the start of intra-Afghan negotiations, which should lead to a permanent ceasefire and a lasting political settlement.”