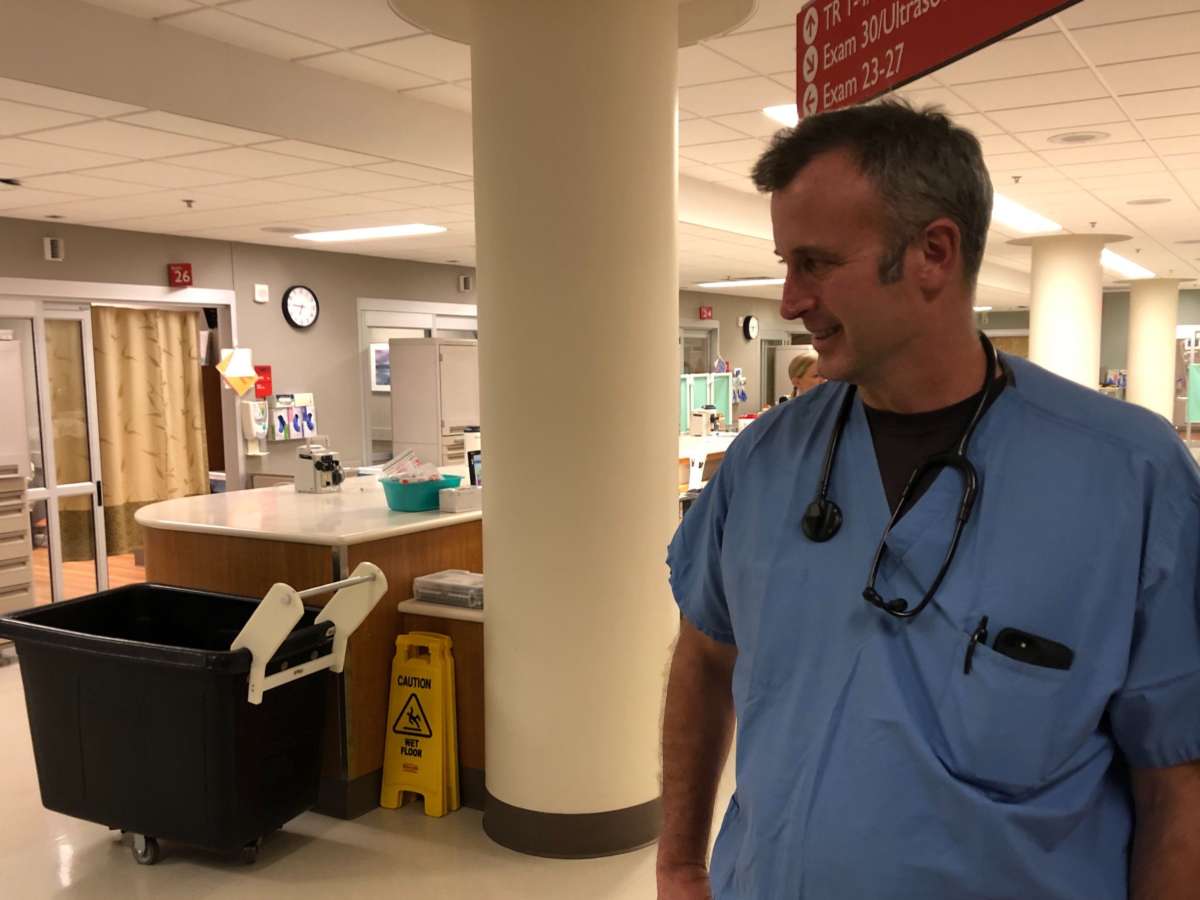 Emergency physician Brad Younggren, in the emergency department at EvergreenHealth hospital in Kirkland, Wash., where he's been caring for patients with likely cases of COVID-19.
Image credit: Martin Kaste

As the coronavirus spreads in the U.S., public health agencies are starting to worry about hospital capacity.

Overseas, China was forced to build two new hospitals on an emergency basis, and in South Korea earlier this week, the government said over two thousand people were waiting for hospital care.

The potential numbers in the U.S. are daunting. Richard Waldhorn is a pulmonary critical care physician who’s studied hospital preparedness for the Johns Hopkins Center for Health Security. Last week, he co-wrote an article arguing that American hospitals should prepare for the possibility of too many patients.

“The arithmetic suggests that we will outstrip hospital resources, particularly instensive care resources, in waves as the pandemic spreads,” he says.

He says government planning assumptions based on past flu pandemics suggest a surge in demand for intensive care that could range somewhere between 200,000 thousand and 2.9 million patients.

The American Hospital Association says the total number of Intensive Care Unit beds is about 65,000.

Waldhorn says hospitals can make more ICU beds available in a crisis, perhaps doubling the capacity, but there’s still a chance it won’t be enough.

“We’re going to have to face the problem of how do we allocate limited health care resources in some sort of rational and ethical and organized way with the goal of doing the greatest good for the greatest number,” he says.

He gives the example of “extracorporeal membrane oxygenation,” a technique for oxygenating blood outside the body, in cases of respiratory failure. Chinese doctors reported some success using the procedure to keep COVID-19 patients alive, but it’s not something that could be easily provided to hundreds or thousands of patients.

In Washington State, things have not yet reached the stage of tough choices.

EvergreenHealth hospital in Kirkland identified the country’s first fatal case of COVID-19 last Friday, and since then it’s borne the brunt of the most serious cases — and most of the country’s deaths. Many stem from the outbreak at the nearby Life Care nursing facility.

One week later, the hospital has made plans to house even more of the patients, by taking steps such as converting more sections of its buildings into “negative pressure wards,” in which HVAC systems keep germs from spreading. Still, they’re feeling the strain.

“Right now I know for certain, we have one critical care bed left,” the CEO, Jeff Tomlin, said on Thursday night. “We’re right now already talking to the other facilities to see what their capacity is.”

Other hospitals in the region are preparing for the possibility of that overflow by designating floors or wings to be used for “cohorts” of COVID-19 patients, which would allow more efficiency in caring for groups of them, especially given the cumbersome protective suits that medical workers have to wear when treating them.

Some nurses in the Seattle area and California have complained about a shortage of protective gear, especially N95 masks. The union representing nurses at EvergreenHealth said many of them didn’t have sufficient supplies of protective gear, and didn’t have enough orientation for how to safely handle suspected coronavirus cases.

In Washington State, officials say they’ve received more masks and other protective gear from the federal government, to help alleviate the shortage.

A complicating factor is that even without COVID-19, this has been a bad flu season. Many American hospitals have been running close to capacity, says Mahshid Abir, a senior policy researcher at the RAND Corporation and an emergency physician at the University of Michigan.

“We in the last few weeks, in our health care system, have gotten multiple notifications of the hosptial being at full capacity. And I would say this is not unusual for most academic centers across the U.S.,” Abir says.

She blames this in part on the fact that many Americans with poor access to health care don’t come in until they’re very sick, which adds to the burden for emergency departments and ICU’s.

Now, as coronavirus fears spread, she predicts an even bigger load on hospitals.

“I think we’re going to see a lot of anxiety, and it will be not all coronavirus, necessary. It could be a lot of people who are the ‘worried well,'” she says.

While most people who get the virus suffer only mild symptoms, there’s a subset that will need critical care. If the overall infection rate is large, that subset could be very numerous.

In anticipation, hospitals in the Seattle area are trying to clear more beds.

“We should not have people in the hospitals who do not need hospital care and there’s a lot of them,” says Cassie Sauer, CEO of the Washington State Hospital Association.

The association has long argued that too many people take up beds after treatment because there’s no place for them to go — such as long-term care. Sauer says the COVID-19 crisis has focused minds on moving those patients out.

“We are working very closely with the state and with the health insurers to say, ‘Those people need to be moved out,'” she says. “That’s the number one way to create capacity.”

In the meantime, public health officials in Washington State are implementing a strategy of trying to flatten the anticipated wave of patients.

King County, site of the biggest known American outbreak of COVID-19, is setting up modular housing and repurposing a motel to house patients with milder symptoms. The goal is to keep them from swamping the hospitals, while still keeping them isolated, to slow the rate of infection in the general population.

At EvergreenHealth, Francis Riedo is a big believer in the “flatten the wave” strategy. He’s the infectious disease specialist who last week made the call to test two patients suffering from unexplained severe respiratory disease, which ended up identifying the country’s first COVID-19 death. Since then, he’s been emailing colleagues around the country, advising them to do the same.

“Start looking now,” he says. “Go out and find your high-risk, critically-ill patients with unexplained, undiagnosed infections, and start testing them.”

He says it’ll be better — and the wave of patients will be flatter — if hospitals act sooner.