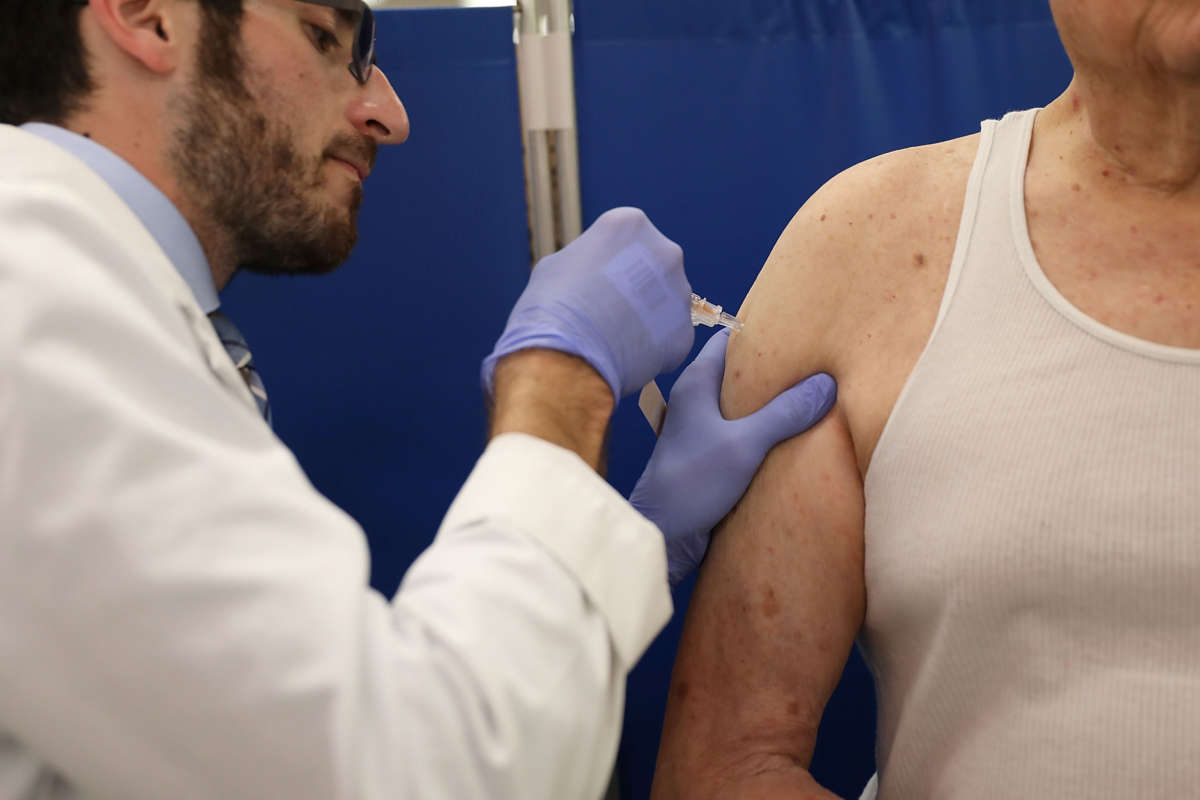 Pharmacist Raphael Lynne gives a flu shot in Miami in 2018. This year's vaccination against influenza has been reducing infections by "about 40 to 50 percent," says Emily Martin, an epidemiologist with the University of Michigan School of Public Health.
Image credit: Joe Raedle

While health officials in the United States wait to see just how bad a public health challenge COVID-19 will pose, they still have to deal with an all-too-familiar challenge: flu.

It’s been a bad flu season. Not the worst ever, but bad.

“It started very early this year,” says Emily Martin, associate professor of epidemiology at the University of Michigan School of Public Health. She works with the Centers for Disease Control and Prevention collecting statistics about flu.

This year’s flu season started picking up steam around Thanksgiving.

The CDC doesn’t test everyone who has flu symptoms to be certain they really have flu, rather than some other viral infection. Still, the CDC estimates are reckoned to be pretty accurate, and they are updated regularly.

“So far this season we’ve had between 30 and 40 million illnesses in the United States,” Martin says.

Of that number, about half were ill enough to seek medical care, and between 300,000 to 500,000 people required hospitalization.

Just for comparison, that’s a thousand times more deaths in the United States than have been blamed on the coronavirus so far.

Martin says one thing that’s kept this year’s flu season from being worse is the flu vaccine. Health officials have to make predictions well before the season starts about which flu strains the vaccine should protect against, so manufacturers have enough time to actually make the vaccine. This year’s vaccine is working relatively well.

“It’s been reducing infections by 45 to 50 percent,” says Martin. “This is better news than what we had last year, when the vaccine was totally mismatched and was having trouble preventing infections.”

Flu is clearly a seasonal illness, with cases picking up in the fall and tapering off in the spring. Many teams around the country create computer models to predict the severity of a given season.

Each year, the CDC invites computer scientists to run enter a competition called FluSight to see which model gave the best prediction. Last year Dave Osthus, a statistician at Los Alamos National Laboratory won for a model he called Dante, which bases its predictions almost exclusively on historical patterns of disease.

He says his model, and others models he’s aware of, all say the worst of this year’s season is behind us.

“That said, levels currently are still quite high,” Osthus says. “So we have good news — sort of — on the horizon, but we’re still in an elevated situation.”

With rare exceptions, everyone over 6-months-old is eligible for a flu shot and can benefit from it. If you still haven’t gotten a flu shot yet, now’s the time, the CDC says.

If the number of COVID-19 cases in the U.S. do go up dramatically, it could, at least for a while, overwhelm a health care system that’s been pushed pretty hard by flu.