U.S. Expresses Concern That Syria May Still Have Chemical Weapons 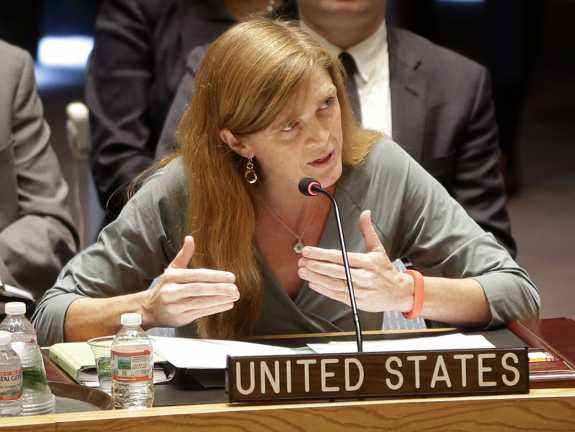 The United States on Thursday said it was concerned that Syria may still have chemical weapons and that extremist groups could get a hold of them.

The United States ambassador to the United Nations Samantha Power made the comments after she received a private briefing on Thursday from the U.N. official in charge of coordinating the removal of Syria’s chemical stockpile.

“Under [Sigrid] Kaag, 96 percent of Syria’s declared chemical weapons stockpile, including all of the most lethal materials, have been destroyed.

“But Ms. Kaag told reporters after the briefing that Syria had yet to address what she described as ‘some discrepancies or questions’ about whether it had accounted for all of the chemical weapons in its arsenal. She also said Syria had yet to destroy seven hangars and five tunnels used for mixing and storing the weapons — which is required under the chemical weapons treaty that Syria has signed. The Organization for the Prohibition of Chemical Weapons, the Hague-based group that collaborated with the United Nations in overseeing the Syrian chemical disarmament, is now responsible for ensuring that Syria honors its promise.”

Power spoke in starker terms. She was asked by a reporter if she was concerned that the chemical agents that may still be in Syria could fall into the hands of the Islamic State, which is also known as ISIL.

“Certainly if there are chemical weapons left in Syria, there will be a risk that those weapons fall into ISIL’s hands,” she said. “And we can only imagine what a group like that would do if in possession of such a weapon.”

This bit of news shouldn’t come as a complete surprise. Remember, back in May we told you that Human Rights Watch concluded that evidence “strongly suggests” that the regime of Bashar Assad was using chemical weapons against its own people. That was happening at the same time the regime was turning over its weapons to the OPCW.

In April, the OPCW also launched a fact-finding mission to establish whether Syria used chlorine gas in an attack.