U.S. Disaster Response Scrambles To Protect People From Both Hurricanes And COVID-19 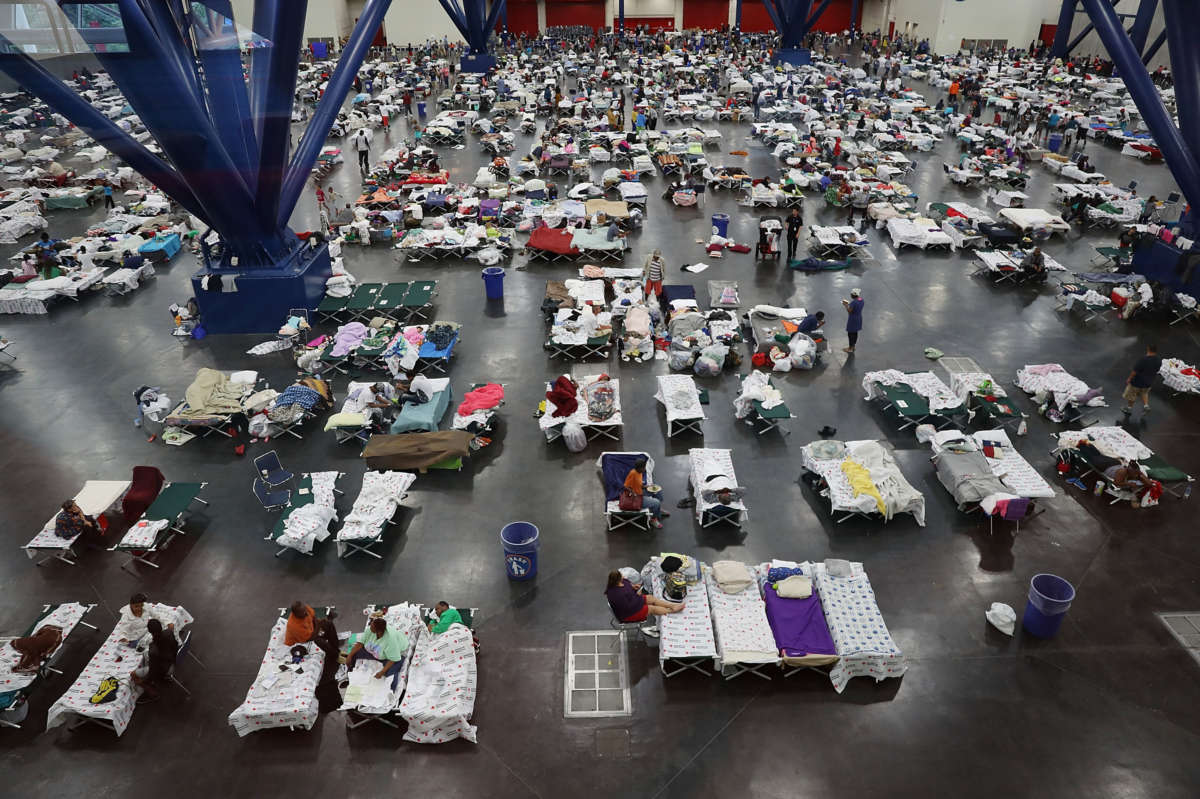 In August 2017, the George R. Brown Convention Center in Houston was over capacity after floodwaters from Hurricane Harvey inundated the city. This hurricane season, congregate shelters — from school gyms to vast convention centers — risk becoming infection hot spots if evacuees pack into them as they have in the past.
Image credit: Joe Raedle

With peak hurricane season yet to come, southeast communities are grappling with uncertainty over whether it’s possible to evacuate to shelters without risking coronavirus exposure.

A powerful storm could uproot tens of thousands of people at a time when coronavirus infections and deaths from COVID-19 are soaring through the region. Congregate shelters, from school gyms to vast convention centers, risk becoming infection hot spots if evacuees pack into them. Shelters are managed by the American Red Cross under the supervision of the Federal Emergency Management Agency. But the Red Cross intends to adhere to new guidelines based on the Centers for Disease Control and Prevention’s social distancing standards, which could cut shelter capacity by as much as 60%, according to local emergency managers.

In planning for a hurricane season that scientists expect to be unusually active, FEMA is scrambling to find ways to house the possible overflow of evacuees from crowded shelters and is urging emergency managers to consider hotels left vacant by the economic downturn as a key alternative.

Yet many emergency managers are unsure how — or even if — to incorporate hotels into their evacuation plans. Florida seems to have made the most progress in building a network of hotels as alternative shelters. But details, such as who will get rooms, remain unresolved. In some states, including Alabama, county emergency managers say they’re not planning to rely on hotels at all.

The United States’ patchwork disaster response programs — led by localities and financially backed by FEMA — might not be enough to protect people against both hurricanes and the coronavirus, according to interviews with more than two dozen emergency management officials and experts.

Public health experts warn that the consequences could be grave, in part because residents who evacuate to shelters, rather than stay with family or book their own hotel rooms, are more likely to be seriously harmed by COVID-19 if they are infected.

“Those are the same people who have less access to health care, less health insurance, and are more likely to have unknown or uncontrolled comorbidities and may be at higher risk of death or complications from COVID,” says Dr. Emily Landon, an infectious diseases specialist at University of Chicago Medicine. “The last thing you want to do is take people from a dangerous situation involving a hurricane and move them into a dangerous situation involving COVID.”

Emergency managers worry that the fragmented shelter planning could leave evacuees without a clear place to go when a storm approaches — or evacuees could end up crammed into facilities without social distancing.

“A hurricane is a very imminent threat to life and safety,” says Zach Hood, emergency management director for Baldwin County, Alabama. “We have to mitigate against the immediate loss of life, even if it puts everyone in a compromised position to deal with and contain coronavirus.”

Emergency managers also fear that the pandemic will keep people out of shelters, unless they show ahead of time that evacuation can be done safely. Nancy McCall, a 75-year-old Hurricane Katrina survivor, lives in Coden, Ala., a coastal community prone to flooding. In the past, she and her family evacuated to a high school used as a shelter. But McCall says she now plans to avoid it at all costs.

“No way on earth,” she says. “I’d stay outside before I’d go up in that school.”

The school is small, and people in Alabama haven’t been taking the pandemic seriously by wearing masks or social distancing, she says. McCall lives on a fixed income and says she likely won’t be able to afford her own hotel room. Because local leaders aren’t prioritizing hotels as a shelter alternative, she probably won’t get a room for free. If there’s a bad storm this year, McCall plans to drive her truck to the top of a hill and park under a tree.

FEMA says its pandemic-specific hurricane guidance will keep evacuations safe. It recommends the use not only of hotels but of classrooms and empty dormitories. “I’m confident that we’re seeing a very assertive planning effort at the state and local level in a lot of communities,” says David Bibo, acting associate administrator for response and recovery at FEMA.

The CDC urges emergency managers to prioritize hotels, dormitories and small shelters over large shelters. In a recent webinar, CDC senior health advisor Mollie Mahany said hotels are “ideal.” They offer private bathrooms and usually have individual ventilation systems, and many are wheelchair accessible, often an advantage over standard shelters.

But at-risk coastal communities of all sizes have been cool to the evacuation alternatives, despite high coronavirus infection rates.

Nickea Bradley, Houston’s deputy director for emergency management, says hotels aren’t a reliable alternative because the city doesn’t own them and hotels have the discretion to turn away evacuees who test positive for the coronavirus.

Houston is also hesitant to enlist hotels because FEMA’s financial help might not be enough. “Whether FEMA is paying for it or not, I’m sure there’s a limit to what they’ll reimburse for,” says Bradley. “So I think that’s the part where there’s a bit of caution.”

FEMA does not set aside money for emergency hotel rentals. Instead, it plans to partially reimburse localities by tapping its $80 billion disaster relief fund. FEMA says it’s already providing financial support for communities to use hotels as shelters. According to Bibo, 40 states, three tribal governments and one U.S. territory have tapped it.

Susan Cutter, a disaster expert at the University of South Carolina, says financial concerns are warranted. State and local governments using hotels will be responsible for covering a quarter of the cost, a possible hardship because of sharply reduced tax revenues. If disasters this year prove large, FEMA’s promised funding might “not be delivered because there’s no funding available,” Cutter adds.

This year’s hurricane season boosts the chances of large evacuations and is a prime example of how climate change multiplies the damage from public health crises. Climate change has made powerful hurricanes more likely over the last 40 years, and sea level rise and warmer oceans make catastrophic flooding more likely, even from weaker storms. The National Oceanic and Atmospheric Administration has predicted three to six major hurricanes in 2020, compared with three major storms in a typical season. Already, six named storms have gathered in the Atlantic Ocean this year. It’s the earliest on record that a sixth named storm has formed.

Just east of Mobile, Ala., Baldwin County’s location on the Gulf of Mexico makes it a frequent hurricane target. It can typically shelter about 5,000 people during hurricanes. County officials say they plan to nearly triple space allotted to each evacuee group inside shelters, dramatically reducing capacity. The county has made informal agreements with additional facilities to house any overflow of evacuees, but total shelter capacity will still fall short of pre-pandemic levels.

But Baldwin County, like many communities, isn’t considering using hotels. In the county and across the southeast, hotels often sit in hurricane evacuation zones along the coast, making them ineligible as shelters. And some communities say it would be too difficult and expensive to transport evacuees several hours inland to hotels in other cities.

Planners also worry that if there is an evacuation order, more people this year might need shelter. More than 30 million people are currently collecting unemployment benefits, and with the federal unemployment benefit set to expire at the end of this month, many might lack money to flee a hurricane or pay for a hotel on their own.

Hotel room availability could also become a barrier, say emergency managers. Evacuees who can afford rooms could fill up hotels as a hurricane moved toward landfall. First responders and utility workers travel to disaster areas, and they book whole blocks of rooms. “What I worry about is, we’re going to be competing,” says Mike Sprayberry, North Carolina’s director of emergency management.

Florida, with one of the largest state disaster relief budgets in the U.S., is apparently the furthest along. The state created an interactive map that features the more than 500 hotels that have expressed interest in serving as hurricane shelters. Jared Moskowitz, director of the Florida Division of Emergency Management, says he’d like that number to reach 1,000.

Emergency managers can’t always predict how much shelter capacity will be needed. During Hurricane Dorian in 2019, the strongest hurricane ever to threaten Florida’s Atlantic coast, only 11,000 Floridians used public disaster shelters. By contrast, during Hurricane Irma in 2017, 350,000 people packed into shelters.

It’s unclear how many rooms will ultimately be available for Floridians. Moskowitz says the state can’t afford to book entire hotels ahead of time. Instead, the state will likely enter into pre-emergency contracts with hotels to reserve a portion of available rooms for government use.

In Florida, Miami-Dade County has 82 shelters with 112,000 spaces without social distancing and is also negotiating with hotels. For smaller storms, the county’s director of emergency management, Frank Rollason, says he plans to open double the number of shelters he normally would in order to spread people out. But for a Category 3 hurricane or stronger, he says he could need every last one of those 112,000 spaces. Expanding capacity outside of that is limited because not every building is strong enough to withstand a hurricane. And the stronger the storm, the more people who would need to evacuate.

Other details, including staffing and health-screening protocols, also must be worked out with hotels. And it’s unclear who will get available hotel rooms. In Florida, county emergency managers will decide. Some say they are reserving their rooms for people who have tested positive for the coronavirus or are at high risk for contracting COVID-19. Emergency managers in other states say that decisions about who gets rooms could be made at the last minute.

Could FEMA have done more?

Some emergency management experts have praised FEMA for offering guidance to state and local governments and for providing financial support.

But critics say FEMA’s financial support isn’t enough. They want the agency to take a more hands-on approach with state and local governments at a time of unprecedented hardship. Planning efforts have been “too siloed” at different levels of government, says Bryan Koon, vice president of homeland security and emergency management for IEM, an emergency management consulting firm.

“Normally we say every disaster is local and they need to come up with their own plans,” he says. The convergence of hurricanes and the pandemic “could have benefited from a more collaborative effort to make sure that we’re not leaving people behind in this situation.”

Koon adds: “I’m afraid we could get caught short.”