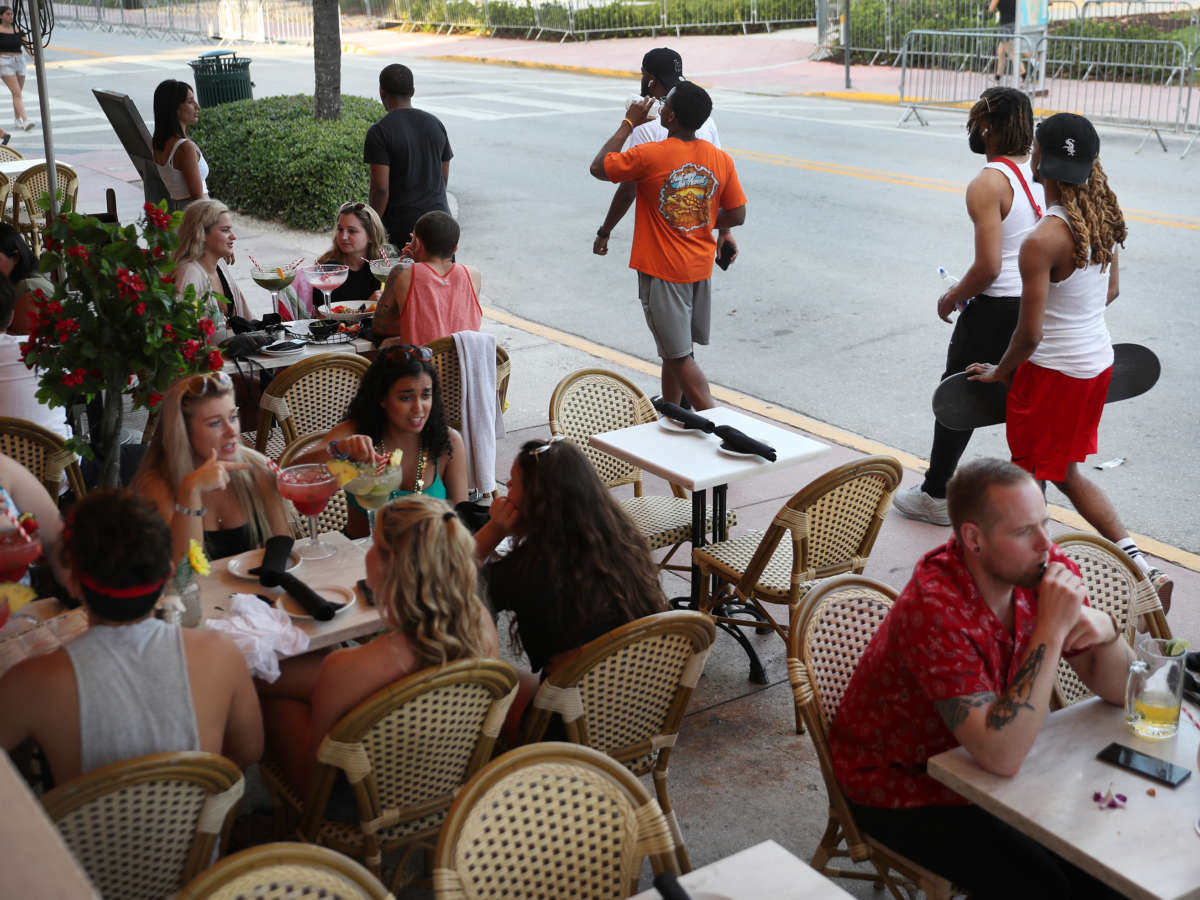 A new analysis finds social distancing has been very effective in slowing the spread of COVID-19 — and that thousands of lives could have been saved if the policies began earlier. In this March 17 photo, people eat at a restaurant along Ocean Drive in Miami Beach, Fla., nearly a week after President Trump declared a national emergency.
Image credit: Joe Raedle

The U.S. could have prevented roughly 36,000 deaths from COVID-19 if broad social distancing measures had been put in place just one week earlier in March, according to an analysis from Columbia University.

Underlining the importance of aggressively responding to the coronavirus, the study found the U.S. could have avoided at least 700,000 fewer infections if actions that began on March 15 had actually started on March 8.

The U.S. currently has more than 1.5 million confirmed COVID-19 cases, and more than 93,000 people have died from the disease, according to data compiled by Johns Hopkins University.

In the analysis, researchers applied transmission models to data drawn from the pandemic’s actual course county-by-county in the U.S. — the worst-hit nation in the world. The main focus of the study was the period from March 15 to May 3, when U.S. states and counties implemented “measures enforcing social distancing and restricting individual contact.”

And if restrictions had gone into effect in the U.S. two weeks earlier, researchers found, nearly 54,000 people would still be alive and nearly a million COVID-19 cases would have been avoided.

The World Health Organization declared COVID-19 a global pandemic on March 11 — an act that had been widely anticipated. Two days later, President Trump declared a national emergency in the U.S. But it took even longer for dozens of U.S. states to order social distancing and shut down business as usual.

If the U.S. had been able to follow social distancing restrictions to the same degree on March 8, the study says, it would have sharply cut the respiratory disease’s impact — and the early action would have made a big difference in densely populated and hard-hit areas such as New York City.

The paper says that if restrictions had taken effect on March 8, the New York metropolitan area would have had at least 209,987 fewer cases and 17,514 fewer deaths.

The study was funded in part by the National Institutes of Health, the National Science Foundation and the Morris-Singer Foundation. The researchers’ findings are in “pre-print” status, meaning their article hasn’t been certified by peer review.

The new analysis finds social distancing has been effective in slowing the spread of the virus, and it looks at what might happen if states or local governments lift those orders too soon — or wait too long to reimpose them.

The researchers say that once counties and states reopen their economies and lift restrictions, the number of daily confirmed cases will likely continue to decline for almost two weeks. That residual benefit from the shutdown, paired with the lag time between COVID-19 infection and diagnostic confirmation, creates “a false signal that the pandemic is well under control,” they write.

Citing a persistent vulnerability to the virus, the researchers say their models describe “a large resurgence of both cases and deaths … peaking in early- and mid-June,” even if restrictions are reimposed, just two or three weeks after being relaxed.

“We have to be so responsive and so attentive to what’s going on,” researcher Jeffrey Shaman tells NPR, “and able to quickly identify when there’s a resurgence of the infection in the community and to respond to it quickly and to have the will to do so and not repeat our mistakes.”

As of Wednesday, all 50 states have at least partially eased restrictions on businesses, with a mix of policies letting restaurants or stores welcome customers. Many states still have stay-at-home orders or other social distancing policies in effect, and some cities and counties are maintaining shutdown orders.