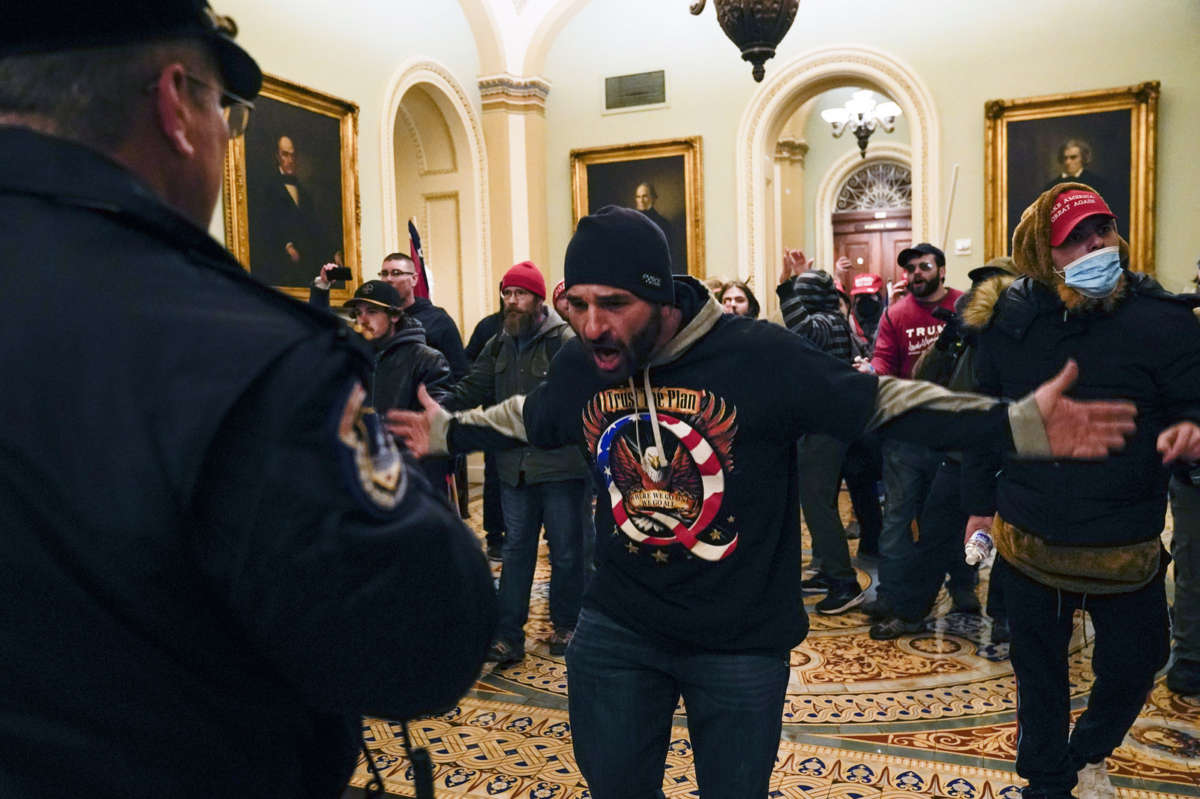 Protesters gesture to U.S. Capitol Police in the hallway outside of the Senate chamber inside the Capitol on Wednesday.
Image credit: Manuel Balce Ceneta | AP

The U.S. Capitol was engulfed in chaos on Wednesday, as supporters of President Trump, responding to his call to head there, breached the complex, resulting in violence in the seat of America’s federal government.

The surreal and dangerous scene interrupted proceedings in the House and Senate, as members of Congress were taking up President-elect Joe Biden’s Electoral College victory.

For two months, Trump has falsely claimed the election was stolen from him, and dozens of fellow Republicans planned to object to slates of electors from various states they considered contested.

Lawmakers were debating Arizona’s results — a state Trump lost narrowly — when the sessions were recessed as the U.S. Capitol Police attempted to put the complex on lockdown.

But violent protesters were seen smashing windows, and occupying the House and Senate floors and various offices. Police were seen with guns drawn in the House chamber, pointing their firearms at windows that were smashed.

Police with guns drawn watch as protesters try to break into the House Chamber at the U.S. Capitol on Wednesday, Jan. 6, 2021, in Washington. (AP Photo/J. Scott Applewhite)

People inside the building were told to shelter in place, and members of Congress were told that tear gas was being used in the Capitol rotunda and that they should get ready to put on masks on.

A person suffering from a gunshot wound was transported by Washington, D.C., EMS from the Capitol, an official with knowledge of the matter tells NPR.

Trump, who has incited his supporters with provably false claims of widespread voter fraud, tweeted in response to the rampage: “I am asking for everyone at the U.S. Capitol to remain peaceful. No violence! Remember, WE are the Party of Law & Order – respect the Law and our great men and women in Blue. Thank you!”

His response to the violence came just a few hours after a midday address to supporters outside the White House, in which he repeatedly denied the results of the election, claiming without evidence that it was rigged against his campaign.

“This election was stolen from you, from me, from the country,” he said.

He also urged his supporters to head to the Capitol, adding: “You’ll never take back our country with weakness.”

WASHINGTON, DC – JANUARY 06: Members of congress run for cover as protesters try to enter the House Chamber during a joint session of Congress on January 06, 2021 in Washington, DC. Congress held a joint session today to ratify President-elect Joe Biden’s 306-232 Electoral College win over President Donald Trump. A group of Republican senators said they would reject the Electoral College votes of several states unless Congress appointed a commission to audit the election results. (Photo by Drew Angerer/Getty Images)

Vice President Pence more forcefully condemned the violence, saying that the chaos engulfing the Capitol was an “attack on our Capitol,” and tweeting that people involved must “immediately leave the building” and would be “prosecuted to the fullest extent of the law.”

In a tweet, White House Press Secretary Kayleigh McEnany wrote that the National Guard had been called in at Trump’s direction.

“We reiterate President Trump’s call against violence and to remain peaceful,” she wrote.

Alerts citing police activity were sent to individuals in the Cannon House Office Building and the Library of Congress’ James Madison Memorial Building.

Individuals in Cannon were originally told to evacuate as well but were later instructed to stay in the building, according to recent email updates from Capitol Police. The evacuation notice has since been cleared.

Staff inside the Library of Congress were also told to exit the building and remain calm, according to reporting from Politico.

The events come as thousands of pro-Trump and far-right protesters have congregated in downtown D.C. to contest the results of the presidential election.

Lawmakers acknowledging the escalating violence have called for a peaceful resolution to the fracas.

Republicans, who spent the summer castigating the mostly peaceful protests against racial police violence, had previously encouraged demonstrations calling to overturn the election results. On Wednesday, many called for law and order as tensions between protesters and law enforcement swelled.

Just evacuated my office in Cannon due to a nearby threat. Now we’re seeing protesters assaulting Capitol Police.

This is wrong. This is not who we are. I’m heartbroken for our nation today. pic.twitter.com/jC9P0YfSLQ

Violence is always unacceptable. Even when passions run high.

Anyone engaged in violence—especially against law enforcement—should be fully prosecuted.

God bless the Capitol Police and the honorable men & women of law enforcement who show great courage keeping all of us safe.

Congress has begun the process of officially recognizing the results of the presidential election. The process has been delayed for several hours after multiple Republican members challenged the results in Arizona, a move they are expected to do with several states.

NPR’s Deirdre Walsh and Kelsey Snell contributed to this report.